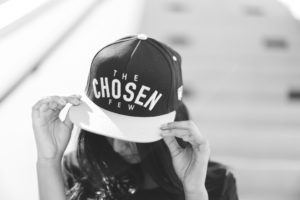 In Eph 1:4, Paul says that believers have been chosen. In this case, however, God is the One that has done the choosing. Paul writes that, “He chose us in Him before the foundation of the world, that we should be holy and without blame before Him in love.”

The question is: What has God chosen us for?

Many think that Paul is saying that the believer is chosen by God for eternal life. This view sees Eph 1:4 as saying that God chose certain people in eternity past to be eternally saved, and those people will be “holy and without blame” because of their position in Christ. Because they are in Christ, all their sins are forgiven and they have been chosen to be holy forever.

The Reformation Study Bible takes this view. It says that Eph 1:4 means that God has chosen people for a relationship with Himself. God’s choice always had in view the union of a fallen people with their Redeemer.

Thomas Constable, in his Bible study notes, holds the same view. To be “holy” means to be set apart for God. To be “without blame” means to be without blemish and describes Jesus Christ in 1 Pet 1:19. The believer positionally has the same holiness as his Savior.

Closely related to the view that Eph 1:4 is talking about God’s choosing people for eternal life is the idea that holy living is also a result of God’s choosing believers. E. K. Simpson (Ephesians, p. 26) says that God’s design in eternity past will not fail. All the chosen are also elected to live in holiness. Eadie (Ephesians, p. 21) says that this holiness includes the believer’s final perfection. It begins in this life in how the believer lives. This is the result of God choosing the believer. God gives the believer a holy heart and this heart leads to a stainless life.

In summary, there are those who assert that Paul is saying that God chooses some people to go to heaven. Those He chooses will also live holy lives. People who are not chosen will go to hell. Those who are chosen have no choice in how they live. Their lives will please God.

Many will recoil from such a theology. In addition, it certainly seems to go against the teachings of the Bible that say that men and women are responsible for their actions. In addition, if we do not have free will, how can we be held responsible by God for anything we do or do not do?

A more basic question is: Is this view the only way to understand Eph 1:4?

Chosen As a Group

Many have noted that in the book of Ephesians, Paul’s main emphasis is on the Church. God chose in eternity past that both believing Jews and Gentiles would be united in the Body of Christ as the Temple of God.

But what is that purpose and is it automatic?

It is very clear that Paul is saying God chose believers to live in a holy way. But this does not mean that all believers will automatically do so. The words “that we should be” in Eph 1:4 involve the use of a grammatical construction using an infinitive (“should be”). The question is whether this is something that is possible and desirable or simply automatic. In other words, are believers guaranteed that they will live holy lives or not?

An infinitive can be used to indicate a result. If used in this way, one could say that Paul is saying that God chose the Church, and the result is that all believers will live holy lives. Believers would have no choice.

The idea that Paul is talking about the purpose of His choosing makes perfect sense in the context. What is the purpose of God’s choosing the Church? He wants it to be a body of believers who live in a godly way. The world is to see Him in us. We are to reflect our holy Heavenly Father in our holy actions. He created the Church for this purpose (Eph 2:10).

Specifically, believers are to live holy lives “in love” (Eph 1:4). Members of the Church, even Jews and Gentiles, are to love one another. We are to love one another as Christ loved us. But as we know from the Scriptures and experience, believers often do not live up to the purpose for which God placed us in the Body of Christ. Believers are often unloving towards each other. Living holy lives in love is anything but automatic!

Paul Told the Believers at Colossae the Same Thing

When we conclude that in Eph 1:4, Paul is saying that members of the Church have the option to live godly lives, we see that he says the same thing in Col 1:22-23. A quick look at Col 1:22 shows that it is parallel with Eph 1:4 and Paul is dealing with the same topic. The words “holy and blameless” as well as “before Him” are the exact same words in Greek in both verses.

In Col 1:22, Paul says that Christ died to present us holy and blameless before Him. We see in the next verse that this is not automatic. Believers will be holy and blameless before the Lord if they continue grounded and steadfast in the faith. Here, the word “faith” refers to the teachings of the Apostles that were challenged by the false teachers Paul was addressing in the book of Colossians.

But when will believers appear “before Him”?

The Judgment Seat of Christ

It is unfortunate that many people assume that most verses in the NT deal with eternal salvation. Both Ephesians and Colossians were written to believers. They already knew they had eternal life. They would never appear before Christ to find out if they were going to be in the kingdom of God.

Instead, all believers will appear before the Lord at the Judgment Seat of Christ (2 Cor 5:10). That is when we will appear “before Him” (Eph 1:4; Col 1:22). On that day, the Lord will evaluate the lives of believers for the purpose of rewards.

To the Colossians, Paul said that he taught believers in the hope that they would be mature believers when they appear at the Judgment Seat (Col 1:28). In Ephesians, Paul wants the believers there to understand their “calling.” They were called to receive a glorious inheritance in the kingdom (Eph 1:18). If they lived holy lives they would receive at the Judgment Seat a glorious inheritance/reward in the kingdom.

When I was a kid, it was great to be chosen in pick-up basketball games. When chosen, I was part of the game. I was not on the sidelines watching others play.

If you have believed in Jesus Christ for eternal life, you have been chosen. You are part of the Church, the Body of Christ. God has chosen the Church for a purpose: that we would live godly lives. That when we appear before the Judgment Seat of Christ we will be found by Him as mature believers who will receive His approval and rewards and thus bring honor and glory to Him.

But such rewards and such living are not automatic. If we continue using the analogy of a basketball game, the question is: how did you play the game? Did you play in such a way that pleases the One Who chose you to be a part of His Church? God has chosen you to “play.” We have the honor and joy of doing what He chose us to do. Will we do it, or choose to just sit on the sidelines?

Ken Yates is Editor of the Journal of the Grace Evangelical Society and GES’s East Coast and International speaker. He is the pastor of Little River Baptist Church in Jenkinsville, SC.

Marguerite Galbraith, Sharon’s best friend, raised this interesting question. Many Evangelicals speculate that the United States will not be part of the Lord’s kingdom since...