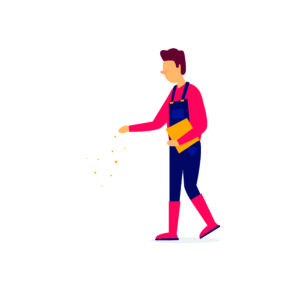 In Mark 4:26-29, we find a parable of the Lord unique to Mark’s Gospel. It doesn’t get much attention. I think
the attention it does receive is often superficial.

A major reason for this neglect is that this parable is often treated more or less as a repetition of the Parable of the Four Soils which occurs earlier in the same chapter (Mark 4:3-9). That parable is longer and is often discussed as to its meaning and application. It might be easy to conclude that this later, shorter, parable does not have much to add.

It is clear, and practically unanimously believed, that the Parable of the Four Soils deals with how individuals respond to the words of the Lord. Different people respond in one of four different ways.

With the parallels between the two parables, it might logically follow that the second, shorter parable has the same basic meaning as the first. I think a closer look at it might challenge that view.

I think a potential problem at looking at Mark’s unique parable is the tendency we have in the West of looking at things in an individualistic way. I believe the meaning of this parable can only be understood if we widen our view. We need to look at it as it relates to the world.

I come to that conclusion based upon the wider context of Mark. In the first three chapters, Jesus offers the kingdom of God to the nation of Israel. This was to be the fulfillment of numerous OT prophecies. The kingdom will be a time when the Messiah will rule from Jerusalem. Righteousness will reign. All the promises made to the nation will be fulfilled. Israel will be the center of the world with the nations of the world coming to her to worship God. The kingdom will certainly bring about a great change from the world in which we currently live!

At the end of chap. 3, the religious leaders, as representatives of the nation, reject Christ and His offer. The kingdom would not come to that generation of Jews.

The parables of chap. 4 describe the results of that rejection.

One of the questions is: Will the kingdom still come to Israel? It seems to me that this is a point not often made when this parable is discussed.

I suggest that the last verse of this parable points to that fact. The Lord speaks of a coming harvest that is ripe. hen that time comes, He will put His sickle into the harvest (Mark 4:29).

There are parallels with this verse and a prophecy in the OT about the coming kingdom and how it relates to the nation of Israel. That prophecy is found in Joel 3:13. There the prophet says, “Put in the sickle, for the harvest is ripe” (NASB). This prophecy is talking about when Christ returns at the Battle of Armageddon. At that time, He will judge the nations attacking Israel. After these events, Jerusalem will be holy, and God will dwell there (Joel 3:17). This is a clear description of the coming kingdom of God and the place Israel will have in that kingdom.

Often we as believers only think in individualistic ways. Christ wants to expand our vision of things.

How is your spiritual vision?

____________________
Ken Yates is Editor of The Journal of the Grace Evangelical Society and GES’s East Coast and International speaker. He is the pastor of Little River Baptist Church in Jenkinsville, SC.