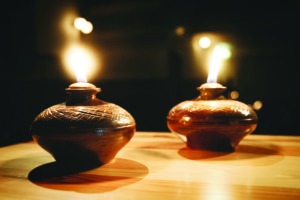 A few years ago I was one of four authors, including Tom Schreiner, James D. G. Dunn, and Michael Barber, for a book called Four Views on the Role of Works at the Final Judgment. In my portion of the book one of the things I discussed was this parable (pp. 36-37). A reader brought up three points for me to answer:

1. You have hung your hat on the fact that any “saving” that is going on in these passages is merely physical salvation.

2. The midnight cry is the mid-point of the Tribulation and not the Rapture.

3. Also, that Christ saying, “I never knew you” is analogous to missing out on a virginal torch dance. Is it just me, or does this try and de-fang the real bite of the passage? To me, if my Lord and Savior barred the door on me and said He did not recognize me…I would be sweating bullets, not bummed that I didn’t get to “party.”

I will address those three comments about the Parable of the Ten Virgins in order:

1. Neither sōzō (save) or sōtēria (salvation) occur in the Parable of the Ten Virgins or in Matthew 25 (or 24:45-51). I suppose when you speak of “saving” (in quotes) you are referring to Matt 25:11-12 where the five foolish virgins say, “Lord, lord, open to us!” and He responds, “I do not know you.” I do not see that as salvation of any kind, but if I did, I would not see it as physical salvation. The issue here is not physical survival (compare Matt 24:22) or escaping a temporal difficulty. The issue is related to the kingdom. In my view the issue is not entering the kingdom, but being chosen for a position of honor in the kingdom.

2. I do take it that the midnight cry refers to the abomination of desolation which will occur at the mid-point of the Tribulation. However, my interpretation does not depend on that. This could be some event which occurs before the end of the age, that is, before the Second Coming. (If the midnight cry is the Rapture, as you seem to suggest, then all ten virgins would be gone in the Rapture and the parable would not make any sense.)

3. Clearly the five foolish virgins had been slated to take part in the torch dance. So if your view is correct and participation in that dance signifies getting into the kingdom, then these five virgins lost everlasting life. They had been chosen to take part. They each had been given a torch. They each had enough oil for their torches to burn for a short time. I do not know if you are an Arminian or a Calvinist. If you are an Arminian, then the interpretation you suggest works well with your theology (though not with John 3:16 and many other texts). They lost everlasting life. But if you do not believe that everlasting life can be lost (John 3:16; 6:35; 11:26), then your view is puzzling. What did the five foolish virgins have before the midnight cry? What do the torches represent? What is the issue with the fact that they did not have enough oil to keep their torches burning? Why are they to buy more oil? I would be sweating bullets if my Lord and Savior barred me from special service. See 2 Cor 5:9-11 and “the fear of the Lord.” See 1 Cor 9:27 and “lest I myself be disqualified [better = disapproved].” If Paul feared disapproval before his Lord and Savior, surely we should too. But disapproval is not the same as being barred from the kingdom and sent to the lake of fire.

1. Whatever view you take of the ten virgins, the five foolish virgins are foolish and they miss out on something very important. But to say that what they miss out on is the kingdom is a stretch in my opinion. If that is what the Lord meant why did He not simply say—as He did, by the way, in Matt 7:21-23—that they shall not enter the kingdom of heaven? We don’t find that here. And why doesn’t He say, “I never knew you” as He did in Matt 7:23? In Matt 25:12 He says, “I do not know you.” Why the difference?

2. How do we harmonize Matt 7:21-23 and Matt 25:1-13? In Matt 7:21-23, the problem is that those excluded from the kingdom are pointing to their works, rather than to their faith in Christ, as the reason why they should get in (v 22). But in Matt 25:1-13, the works of the five wise virgins are allegedly the reason they get into the kingdom and the lack of works for the five foolish virgins is the reason they don’t get in. Why are works not enough in the first parable, but enough in the second? Wouldn’t these two parables contradict one another if that view of Matt 25:1-13 is correct?

3. All ten of these young women are called virgins. It would be odd to call unbelievers virgins.

4. All ten virgins are given a torch and a task to do. Do unbelievers receive spiritual gifts and get tasks to do?

6. If this is an evangelistic parable, then what lesson do we learn? Would it not be that we need to develop sufficient spiritual reserves (e.g., the extra oil needed) so that we are able to be worthy to get into the kingdom on the basis of our works? 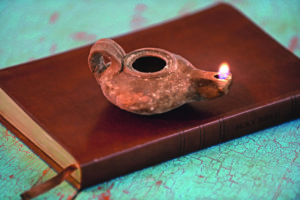 8. What would this parable mean in terms of assurance of everlasting life if it is teaching that we must persevere in faith and good works until death in order to get into the kingdom? Would it not make assurance impossible? Wouldn’t we all, to use your expression “be sweating bullets” each and every day of our lives? If kingdom entrance is based on our perseverance in good works, then assurance is impossible since the Apostle Paul himself said in inspired Scripture that he was not sure he would persevere (1 Cor 9:27).

10. If you are not yet comfortable seeing Matt 25:1-13 as a sanctification passage, as a call to believers to persevere in faith and good works for eternal rewards, then why not simply say, “I know from John 3:16 and Eph 2:8-9 that the sole condition of everlasting life is believing in Jesus and that my works have nothing to do with my eternal destiny. I don’t know what Matt 25:1-13 means. But I know it does not contradict John 3:16 and Eph 2:8-9”?

Start With the Clear Verses

What drives me in Biblical interpretation is harmonizing unclear passages with clear passages (i.e., the analogy of faith). If John 20:28 clearly establishes the deity of Christ, for example, then John 1:1 cannot be saying that Jesus is merely “a god.” If John 6:35 and 11:25-26 prove eternal security, then no other text can say that everlasting life can be lost. If John 3:16 says that “whoever believes in Him…has everlasting life,” then no other text can be saying that some of those who believe in Him will be eternally condemned due to insufficient good works.

If God’s Word is without error—and it is—then it does not contradict itself on any point of doctrine, including eternal security for whoever believes in Jesus for everlasting life.