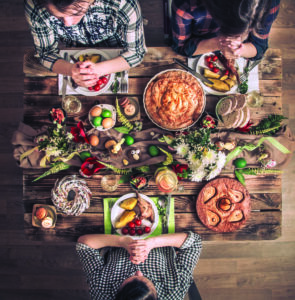 Here is the eminently readable William Barclay describing how the Lord’s Supper was originally celebrated:

It is not in doubt that the Lord’s Supper began as a family meal or a meal of friends in a private house…It was like the Jewish Passover which is a family festival and at which the father and the head of the household is the celebrant. There can be no two things more different than the celebration of the Lord’s Supper in a Christian home in the first century and in a cathedral in the twentieth century. The things are so different that it is almost possible to say that they bear no relationship to each other whatsoever. The liturgical splendor of the twentieth century was in the first century not only unthought of; it was totally impossible (Barclay, The Lord’s Supper, pp. 111-12).

Obviously, it did not stay that way:

They also all agree that the celebration changed over time.

But so far, I haven’t read very many of these commentators evaluate whether it should have changed. They just note the fact that it did and move on to the next point.

But hold on a second!

If Jesus gave us an ordinance, I want to follow His example faithfully, don’t you?

So Barclay’s claim raises several questions for me, such as: should it have changed from a meal to a symbolic meal? Who made that decision? On what authority?

If it should not have been changed, shouldn’t we change it back?

I also wonder what we have lost by turning the Lord’s Supper into a symbolic meal? How did that transform the very nature of Christians meeting together as the church?

And what might be gained by going back to celebrating the Supper together as a full meal? How might doing that impact fellowship, friendship, sharing, discipleship, unity, evangelism, and caring for the needy and hungry? Would the setting of a full meal help or hinder those things?