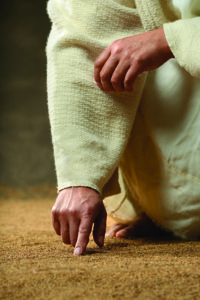 Ask any Biblically literate person about the expression the finger of God and he will either refer to God writing the Ten Commandments with His own finger (Exod 31:18) or to the mysterious fingers of a man’s hand that appeared out of nowhere and wrote a mystical message on the wall in Dan 5:5, 24.

But most Christians have never given much thought to the expression the finger of God.

Recently while seeing that expression in the NT, I realized I needed to give it more thought. This article is a result of my further thinking on the subject.

The Finger of God Writing the Ten Commandments Twice (Exodus 31:18)

Moses tells us, “And when He [the Lord] had made an end of speaking with him [Moses] on Mount Sinai, He gave Moses two tablets of the Testimony, tablets of stone, written with the finger of God” (Exod 31:18, emphasis added). Of course, God the Father has no finger. Nor does God the Holy Spirit. Thus this must refer to the finger of God the Son, the second member of the Trinity.

In this case the finger of God refers to God’s power and to His revelatory power. He not only is great and powerful but He also communicates His will to mankind, in this case, to His chosen people, Israel. 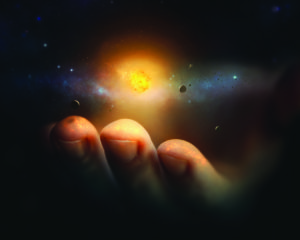 The Lord Jesus Writing in the Dirt Twice with His Finger (John 8:6)

The religious leaders of Israel were trying to catch Jesus in an impossible situation. They knew He was very gracious and forgiving. Thus they figured He would not condemn the woman caught in adultery to death. Yet the Law of Moses commanded that anyone caught in adultery should be stoned. Thus the leaders felt they had Jesus trapped and that He would violate the Law of Moses.

Of course, they felt He violated the Law of Moses every time He healed on the Sabbath too. But this case would be something that they could more easily sell to the masses as being a violation of the Law.

Ken pointed out that by writing with His finger in the dirt, His audience should have understood that He was claiming to be the one who wrote the Ten Commandments with His own finger. Certainly we today should pick this up. Thus they were trying to test the very Person who gave them the Law in the first place. It was the pre-incarnate Jesus who met with Moses at Sinai. He gave Moses the Law. He wrote it once on two tablets of stone. Then when Moses broke the tablets, He wrote the Ten Commandments a second time.

The finger of God in John 8:6, 8 refers to the fact that Jesus, God in the flesh, is the Person who revealed the Law in the first place. He is the Lawgiver. Revelation and authority and power come from Him. To oppose Him is to oppose the Law of Moses whether they realized it or not.

The Ten Plagues of Egypt as the Finger of God (Exodus 8:19)

The idea here is one of great power. God has more power in His finger than any man has in his entire body, or indeed more power than a whole nation of men have.

The finger of God is a picture of great power.

Jesus Casting Out Demons by the Finger of God (Luke 11:19)

When Jesus cast out demons He was accused of doing so by the power of the ruler of demons, not by the power of God (Luke 11:15). As part of His response the Lord Jesus makes this great statement, “But if I cast out demons with the finger of God, surely the kingdom of God has come upon you” (Luke 11:19). Once again the finger of God is a picture of omnipotence, of unlimited power.

Contrary to the conclusions of most in His audience, observant Jews should have seen in His casting out of demons evidence that “the kingdom of God [had] come upon [them].” Never once in the Old Testament are we told of demon possession or of anyone casting out demons. This evidently was the first time in history when demon possession occurred and when the casting out of demons occurred. That should have shown that Jesus is the Messiah and that He was offering the kingdom to that generation of Jews.

I think it wise not to press this passage as conveying the same image. The hand could have simply been a disembodied human hand, which is what the text seems to say. Or it could have been the hand of an angel (remember angels appeared as men many times in the Old Testament), with the rest of his body invisible. To see this as the hand of God (i.e., the pre-incarnate Jesus Christ) is to go beyond the text. Clearly the revelation is from God. But that doesn’t mean that this is another finger of God passage.

At Sinai and in the account of the woman caught in adultery in John 8, the finger of God looks at power that is channeled in revelation. The Son of God is the light of the world, and as such He revealed the Law of Moses to Israel and He interpreted it again and again for His first century Jewish audience.

There aren’t many passages in Scripture that mention the finger of God. But the handful that do are powerful and should inspire in us a sense of awe at God’s majesty.