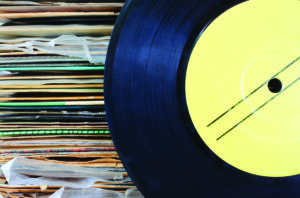 What Is This Approach?

It was the start of the fall semester of my senior year in college. A friend, John Carlson, had invited me to a College Life meeting, a Christian outreach event. He got me there by asking, “Is it possible that your view of the gospel is wrong?”

After that, I began meeting with staff member Warren Wilke. I told Warren I lacked assurance. Could he help me?

We met at the student center for an hour.

Warren introduced me to the broken record approach to evangelism.

He started by saying that I could have assurance if I simply understood and believed the message of Eph 2:8-9. Then he quoted it, “For by grace you have been saved through faith, and that not of

yourselves; it is the gift of God, not of works, lest anyone should boast.”

That sounded good, I said. But what about this other passage? I asked about a tough text like Jas 2:14-26.

Warren gave a short answer, but then said, “But whatever that passage means, it can’t contradict Eph 2:8-9 which is crystal clear. For by grace you have been saved through faith, and that not of yourselves; it is the gift of God, not of works, lest anyone should boast.”

By the end of the first hour I’d asked about ten problem passages and Warren had quoted Eph 2:8-9 at least ten times.

You have been saved once for all.

And that not of yourselves.

It is the gift of God. It is not of works.

No one can boast.

I agreed to meet again a few days later. Another hour. Ten more times he quoted Eph 2:8-9: For by grace you have been saved through faith, and that not of yourselves; it is the gift of God, not of works, lest anyone should boast. I kept asking about passages that concerned me. He kept saying, “Whatever that means, it can’t contradict the clear meaning of Eph 2:8-9.

This went on for five visits. Around fifty times Warren quoted Eph 2:8-9. He was like a broken record. He was stuck on Eph 2:8-9. And you know what? It worked. I got it. That fifth week I was convinced. I knew that by grace I had been saved once and for all through faith in Christ and that my salvation was not of works. There was no ground of boasting for me.

Man, was I happy. That’s probably too weak of a word. I was overjoyed. I was ecstatic. I felt like I’d been delivered from eternity in hell. Well, I had been.

When I started sharing my faith on campus that year, I used a booklet, The Four Spiritual Laws.

I used it that year, the next year as a grad student, and then for four years on staff with Campus Crusade for Christ.

But I longed for the broken record approach. That is what I wanted to use.

The Simplicity of the Broken Record Approach

What I love about this approach is that you take one verse or one short passage and you cling to it. You do not get off your text. You come back to it again and again.

The person is encouraged to engage you in a discussion on the meaning of the passage you are repeatedly quoting.

When Warren shared Eph 2:8-9 with me, I did not simply sit there and take it. I started asking him to defend his explanation based on other texts. We had a dialogue going, one that lasted for five one-hour sessions.

That can happen to you as well. As you share your broken record passage, your listener, if he has any interest at all, will start asking questions or raising objections. Maybe he will mention other passages. Or he might charge you with easy believism or cheap grace. “That’s too easy.” “Why if that were true, then why wouldn’t I just go out and live like the devil?”

The result is dialogue. Dialogue about the promise of life by faith apart from works.

Read John 4:1-25 and notice how the Lord’s interaction with the woman at the well is indeed an interaction.

In the year 2000, a Navigator staff member, Randy Raysbrook, wrote an article on one-verse evangelism. He more or less was suggesting what I’m saying here. Have one point and repeat it as often as needed. You can find his article online here (https://www.navigators.org/resource/one-verse-evangelism/).

Raysbrook uses Rom 6:23 in his article. “The wages of sin is death. But the free gift of God is eternal life [by faith] in Jesus Christ our Lord.”

Thirteen years after I came to faith in Christ via the broken record approach, I received a doctorate from DTS in NT. After I taught for one semester at Dallas Bible College, the school closed its doors. I had several interviews for teaching at other schools. One was an interview at International School of Theology (ISOT) in San Bernardino, California. It was Campus Crusade for Christ’s new seminary.

When I spoke with the vice president in charge of setting up interviews, I told him I no longer used the Four Laws. I just use the Bible. He said that was fine.

But after teaching six separate hours in various classes, I was interviewed. Question 1: Are you willing to take students out and teach them how to share their faith using the Four Laws? No. I use the Bible.

I was now told that disqualified me.

The very approach that Campus Crusade for Christ used to lead me to faith in Christ was not considered a valid one.

Of course, I fully understood and accepted the position of ISOT. Campus Crusade for Christ had a model of ministry. It required all staff, including seminary professors, to use the Four Laws booklet. Since I wasn’t willing to do that, it made sense that they rejected me as a candidate.

But the broken record approach is a valid model of ministry. Indeed, I believe it is far simpler than having to read many passages of Scripture with someone.

The Broken record Approach Is What We See in Scripture

If we study Jesus’ approach to evangelism, we see He basically used the broken record approach. With Nicodemus, He hammered away at the need to be born again, at the need to have everlasting life (John 3:1-18). While He was not quoting an OT text, everything He said was the Word of God.

When Jesus spoke with the woman at the well, He had one point in mind: anyone who drinks the living water He gives will have everlasting life (John 4:1-25). He led her to faith in Him by pressing the image of drinking living water and having one’s thirst quenched forever. Compare John 6:35, “He who believes in Me shall never thirst.”

This same approach is also found in the Book of Acts, with one point of clarification added. People thought that the death of Jesus on the cross proved that He was not the Messiah and hence could not give everlasting life to all who believe in Him. So the Apostles went to the OT to prove to people that the Messiah had to die and rise again from the dead. The good news is both the proof and the explanation for the promise of life: i.e., why all who simply believe in Jesus have everlasting life. In Acts you might consider Acts 10:34-43 (compare Acts 11:14); 13:16-48; 15:7-11; 16:30-34.

Whatever verse(s) you pick, make sure you present the simple truth that all who believe in the Lord Jesus Christ have everlasting life that can never be lost. When you explain the verse, you will naturally bring in the cross and resurrection.

Recently Sharon and I were visiting with a friend who is grieving over the loss of his wife of over fifty years. He did not know where he’d go when he died. But he wanted to know. I chose John 5:24 as my verse. The one who believes in Jesus has everlasting life right now, shall never come into judgment regarding his eternal destiny, and has already passed from death into life. I had him read this out of the Living Water booklet. As we spoke, I pointed out that the cross explains why John 5:24 is true. Jesus paid it all at the cross. He took away our sins. Thus the issue is not our sins. The issue is that we are spiritually dead and we need everlasting life. That Jesus rose from the dead proves that He will raise all who believe in Him to live forever in perfect bodies.

I probably quoted John 5:24 four or five times. Not quite up to Warren’s pattern of quoting Eph 2:8-9 ten times each time we spoke. But my friend got the point. He is not yet persuaded, but I started the conversation and left him with the Gospel of John. I asked him to read a chapter a day.

The broken record approach to evangelism can also be called the KISS method. Keep it simple, saint.

Many believers rarely share their faith. I believe the reason is that they think it is so complicated and difficult that a professional needs to do it. Hogwash. The professionals typically mess it up, bringing in turning from sins, submission, commitment, obedience, and the entire Christian life. Evangelism and discipleship are often hopelessly intertwined by the pros.

If someone hears your verse(s) and says, “That’s fine for you, but I’m not interested,” you can drop it right there without another word. Or, if you think the person is at least a tiny bit open, you might say, “I’ll be praying that you become interested, for I care about you very much and there is nothing more important than having everlasting life.”

With the KISS method, there is only one verse to memorize. Simple. You found the source of everlasting life. You are delighted to tell others about Him and His promise. Keep it simple, saint.

Bob Wilkin is Executive Director of Grace Evangelical Society. He lives in Highland Village, TX, with his wife of 41 years, Sharon. His latest book is Is Calvinism Biblical? Let the Scriptures Decide.