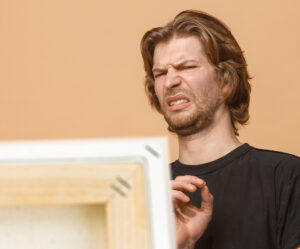 There is a board game called Telestrations that my family and I love to play. A major part of the game is that the players draw a picture of a word, and the other players must guess what you drew. There is absolutely no doubt that I am the worst Telestrations player in the history of the world. Very simply, I cannot draw. In the game, my pictures are universally mocked, with people saying they don’t look anything like what they are supposed to represent. On many occasions, the other players, after laughing, comment, “That is one ugly picture.”

In the OT, the Lord sometimes had His prophets draw a picture for the people to whom they were sent. They would “draw” the picture through their actions, kind of like a game of charades. One such example is found in Jeremiah 19. Unlike the other players who view my pictures, the people knew exactly what Jeremiah was saying with his actions. However, even though it was for different reasons, in one way, Jeremiah’s picture was like mine in the game of Telestrations. The people who saw it commented that it was a very ugly picture.

In the game of charades that Jeremiah takes part in, as he draws a picture, he is told by the Lord that he can use a prop. He is to bring a ceramic water jar. He invites the leaders of his people to play the game. Evidently, there is water in the jar.

Jeremiah draws a picture for these leaders. In front of them, it seems he pours the water from the jar on the ground. The NKJV says that Jeremiah tells them what it means. God is going to “make void” all the plans that these leaders have for Judah and Jerusalem (19:7). The verb for “make void” is a Hebrew word which means to pour out. It is a word that sounds like the noise that water makes when it is poured out of a bottle. In English, it is like our made-up expression, “glug glug.”

The leaders thought Jerusalem was safe because the temple of God was in her midst. That was the centerpiece of their plans. But Jeremiah tells the people that their enemies were going to destroy them. The act of the water pouring out on the ground was a picture of that coming destruction. Perhaps we could say that God was going to pour out His anger on them.

That is not a pretty picture. But the more we study what Jeremiah does and says, we see that it gets much worse.

HOW BAD CAN IT BE?

We can only appreciate how bad Jeremiah’s picture was for the people of Judah when we look at the whole game he plays on this occasion. First, he chose a particular place to act out this charade. It was outside of the Potsherd Gate, to the southwest of Jerusalem. There is disagreement among scholars about some of the details, but we can be fairly certain of what is generally happening. The Potsherd Gate was the place where potters threw their garbage, such as broken pieces of pottery. It is likely that this gate is what would later be called the Dung Gate (Neh 12:31). Whatever that gate was used for, it suggests more than pottery was discarded there.

Jeremiah also tells us that this gate led out to the Valley of Hinnom. This is the place where some Jews had previously sacrificed their own children to the idols they worshiped (19:5). Many innocent lives were lost there because of the sin of the people of Judah. We are told that one of the kings of Judah “defiled” this valley (2 Kgs 23:10). Many believe that means he turned it into the town garbage dump because of the horrible acts that took place there. We can be fairly certain, whatever the exact historical circumstances were, this was not a pleasant place.

But Jeremiah says it will get worse. The valley will soon be called the Valley of Slaughter (19:6). So many of the Jews were going to die there at the hands of the Babylonians, that there wouldn’t be room to bury the bodies. They had killed their children there, so they would die there as well. It was an extremely disgraceful thing in the ancient world not to be buried after one died. Jeremiah says that many of them will lie in that valley and be eaten by animals. Others will see what happened there and be amazed at how horrible those events were.

This Valley of Hinnom was such a terrible place that the name is used in the NT for a place of immense suffering. The word used in the Greek to describe it is Gehenna. Many English translations simply call it “hell” (Mark 9:43).

Before all this happens to the people in Judah, they will suffer other indignities. The enemy will surround their city and cut off their food supply. Inside the walls, they will resort to cannibalism to try to survive. They will even eat their own children (19:9).

As the leaders of Judah saw Jeremiah act this out and explain his actions, we can only imagine what they thought. The picture was so horrible, I am sure that their minds could not comprehend what they were seeing and hearing. The depressing location of this game made it all the darker.

But Jeremiah still was not finished with his picture of what was going to happen. He broke the water jar, after he had poured out the water. The ceramic pieces were left with the other garbage around them. He told the other players that the jar represented their beloved city and the people in it. God was going to break them. He was going to make their city like the defiled valley before them. The beautiful houses in Jerusalem will be filled with the dead as well. Just as they had served idols in the valley, so they had committed their sins on the rooftops of these homes. Their capital, where the temple of God stood, would be as cursed as the valley they were standing in would be.

For good measure, Jeremiah puts the final touches on his picture. He says that all the towns around Jerusalem will suffer the same fate (19:15). Death and destruction will rule the day. They will be everywhere.

NOTHING TO LAUGH AT

Jeremiah drew a very ugly picture about the future of those in his country. Unlike those who see my pictures, the people knew exactly what he meant. He told them in plain words. When I play Telestrations, my pictures bring forth laughter. As ugly as my pictures are, that is the only price I have to pay. Jeremiah, however, did not have the same experience. His picture of Jerusalem and Judah was so terrible, the leaders beat and tortured him (20:1-6). They did not find him amusing at all.

Clearly his painting was so bad because he was trying to draw a picture of what the sin of the people had caused. To the southwest of their city, they looked out on a valley in which innocent children had been burned alive. In that place, they had turned their back on God and worshiped other gods. They brought such worship, with all its degradations, into Jerusalem, the city which carried with it the name of the holy God of Israel. How would such a God respond to such things?

Why did Jeremiah draw such an ugly picture of the future of his people? He was painting a picture about their sin.

A PICTURE OF SIN IS ALWAYS UGLY

GES firmly maintains that eternal life is given as a free gift by God when a person believes in Jesus Christ for that gift. It can never be lost. That is why it is called “eternal.” No sin of any kind can cause the child of God to forfeit that gift. The unbeliever does not have to give up any of his sins to obtain it. With such teaching, we are often accused of not seeing how bad sin is.

But that is not the case. We understand how ugly sin is. When the believer walks in the darkness, he is out of fellowship with God. Living a lifestyle dominated by the flesh and the sins that flow from it brings all kinds of spiritual destruction into a life. The NT says that it is best described by walking in darkness and death. It leads to the loss of eternal rewards. It leads to the lack of growth into being more like Christ. It would be impossible to paint a picture of just how ugly sin is.

I can’t even imagine how, if I was playing Telestrations, and I was asked to draw “sin,” what I would draw. I know it would be a picture nobody would be able to interpret. But in this case, even the best artist in the world could not accurately depict it. Look at Christ. On the cross, He paid for the sins of the world. A person reading any of the four Gospel accounts is able to get a glimpse of what that involved. Yes, the cross reveals His grace. We see how He is able to give eternal life as a free gift by faith alone in Him for it because of His sacrifice.

But when we look at Him on the cross, we also see how ugly a picture of sin would be.

Ken Yates (Lt. Col. Retired; Ph.D.) is “El Jefe” of the GES international ministry. He and his wife, Pam, live in Columbia, SC.