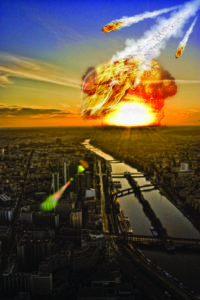 The verb save (sōzō) occurs nine times in Romans and the noun salvation (sōtēria) four times.

I think the easiest place to see that in the thirteen occurrences of these words is in Rom 10:13-14:

Verse 13 is commonly understood as an evangelistic verse. As the next verse shows, that is totally wrong. Believing in Jesus must occur before one can call on Him. That is what v 14 says. The people believe (and according to Jesus, everyone who believes in Him has everlasting life, John 3:16), then they call upon the Lord to be saved.

Did you know that Rom 10:13 is actually a quote of an OT verse? It is from Joel 2:30-32 which talks about cosmic signs and is clearly not discussing just any time in history, but the end of the seven-year Tribulation Period. At that time Israel will be surrounded by Gentile armies which are about to destroy her. But believing Jews will cry out to the Lord and He will save them from destruction at the hands of the Gentiles.

Both in Joel 2 and in Rom 10:1314 it is clear that it is believers who are calling on the Lord and that the salvation is deliverance from calamity in this life. The issue is not regeneration.

Other Uses of Save and Salvation in Romans

All of the uses of save and salvation in Romans fit the idea of deliverance from God’s wrath. Not even Rom 8:24 is an exception, though it might appear to be so. I do not have space to go through all the other twelve passages, so I have selected a handful that I believe illustrate what we see in all of them.

Romans 13:11. Paul says, “…it is high time to awake out of sleep; for now our salvation is nearer than
when we first believed” (italics added).

This is probably the second easiest of the thirteen uses in Romans to see that regeneration is clearly not in view and the salvation of believers is in view.

Notice that he says “our salvation.” Clearly that must be the salvation of believers.

Notice too that the salvation is yet future. This is not the past salvation that Eph 2:8-9 speaks about. This is our future deliverance from something. But from what? Zane Hodges says, “It will be a final and complete deliverance from wrath and from a futile penal-servitude of sin” (italics his). The issue is our future glorification, not our present regenerate status.

Romans 5:9-10. Near the start of his sanctification section of the letter Paul says, “Much more then, having now been justified by His blood, we shall be saved from wrath through Him. For if when we were enemies
we were reconciled to God through the death of His Son, much more, having been reconciled, we shall be saved by His life” (italics added).

Notice that Paul specifically speaks of salvation “from wrath.” Many misunderstand this because they think that wrath means eternal condemnation. However, the lake of fire and eternal condemnation are never called wrath in the Bible. In the first edition of my book Confident in Christ, I spoke of God’s temporal wrath as compared with His eternal wrath. I now realize that was a mistake.

There is not a single verse in the Bible that indicates that God’s wrath is eternal. In my view His wrath is only temporal. Once the Great White Throne Judgment concludes and people are sent to the lake of fire, God’s wrath will be over. He will never be angry again. The lake of fire is about people justly reaping the corruption they have sown for themselves, it is not about God’s wrath.

What is tragically overlooked is the link between the word wrath (orgē) in 1:18 and 5:9. When wrath is already fully defined in 1:18ff, and the definite article appears before the word wrath in 5:9, this article of previous reference looks back to the initial mention. Thus one can be delivered from the corruption of sin now.  This is not a reference to some event that occurs after this life. This is best viewed as an aspect of what is called progressive sanctification or the concept that we are being saved.1

Paul is saying in Rom 5:10 that our deliverance in this life from God’s wrath is achieved by means of Jesus’ resurrection life empowering our lives. That is what the rest of Romans 5–8 goes on to show. Rom 5:9-10 is not about regeneration or justification. It is about being delivered from God’s wrath in this life by means of the life of Christ being manifested in us.

Ken Hornok comments on the importance of understanding salvation in Romans correctly:

It is of utmost importance to the argument of Romans that we not impose the concept of being declared righteous (the transfer of God’s righteousness to those who believe) onto the words “saved” and “salvation” in the book of Romans. The idea of being saved or delivered from the power of sin throughout Romans always has reference to sin’s dominion in the life of the believer rather than to deliverance from sin’s penalty.

Romans 3:21-4:25. Guess what? There is not one use of the words save and salvation in the justification section of the letter. That is quite telling. That is not an argument from silence. It is an argument about silence.

Romans 11:26. Paul says, “And so all Israel will be saved, as it is written: “The Deliverer will come out of Zion, and He will turn away ungodliness from Jacob…” (italics added).

This is referring to the end of the Tribulation. At that time all of Israel will be delivered from Gentile domination and from her current bondage to sin. The entire nation will be believers and in fellowship with God at the end of the Tribulation. No unbelieving Jews and no unfaithful believing
Jews will survive. All the survivors will be both believing and in fellowship with God. Hodges calls this deliverance, “this triumphant spiritual revival.”

Romans 10:9-10. “…if you confess with your mouth the Lord Jesus and believe in your heart that God has raised Him from the dead, you will be saved. For with the heart one believes unto righteousness, and with the mouth confession is made unto salvation” (italics added).

These verses discuss both justification (righteousness) and deliverance from wrath (salvation). They show that justification is by faith and that deliverance is by faith plus confessing Christ. When linked with Rom 10:13, it is clear that believers are the ones who are being saved from God’s wrath, not unbelievers.

These verses can be used in evangelism, but only if you show that righteousness is by faith and that the salvation here is not regeneration. That can be tricky, so I wouldn’t recommend using Rom 10:9-10 for evangelism.

Romans 1:16-17. “For I am not ashamed of the gospel of Christ, for it is the power of God to salvation for everyone who believes, for the Jew first and also for the Greek [italics added].  For in it the righteousness of God is revealed from faith to faith; as it is written, ‘The just shall live by faith.’”

Of course, many think that the expression the gospel of Christ refers to the promise of everlasting life to all who believe in Him. Thus they naturally see the salvation here as deliverance from eternal condemnation.

However, the gospel of Christ is much wider than Christ’s promise of eternal life. It is the good news of Christ’s entire life. It is the good news concerning His death on the cross and His resurrection from the dead. While that is the basis for salvation from eternal condemnation— the events which make the promise of life possible—that is not what Paul is discussing here.

Here Paul is discussing deliverance from God’s wrath, which he makes clear by immediately discussing wrath in the verses which follow (Rom 1:18-32). That deliverance is also based on Jesus’ death and resurrection. As Paul makes clear in the sanctification section of the letter, it is Jesus’ death and resurrection that make it possible for the Spirit of God to give life to our mortal bodies with the result that we live righteously.

Make no mistake. No believer could live a godly life except for the power of the gospel of Jesus Christ. The gospel is a powerful message for the believer as well as for the unbeliever.

What Difference Does It Make How We Understand Salvation in Romans?

First, we evangelize much differently. We make it harder for a person to be justified if we think that salvation in Romans refers to regeneration. If a person thinks that believing in Jesus is not enough to be born again, but that he must also confess Christ publicly and live a godly life, then he believes in works salvation.

Second, we explain assurance much differently. We make assurance impossible because we will end up teaching people that assurance is found not simply in believing in Jesus, but also in our baptism, in our witnessing for Christ, and in all the works which we do. Since our works are not perfect, assurance becomes impossible.

Third, we miss the point of the letter to the Romans. Paul’s concern was not to save the people in the church of Rome from eternal condemnation. That was already true of them.

Paul had several purposes in writing this letter. One was to make sure that the believers in Rome knew how to be delivered from God’s wrath in this present life.

And, of course, Paul wanted the believers in Rome to remember the Judgment Seat of Christ when each servant of Christ will be judged by Him (Rom 14:10-12). The issue there is not eternal destiny, but eternal reward.

Understanding the Scriptures requires that we seek to understand what the author meant by the words he used. Christian lingo is dangerous because it makes people think they know what words like save and salvation mean. As a result, many do not even give a moment’s thought as to what save and salvation mean in Romans. And when you try to explain that Paul was actually talking about deliverance from God’s wrath, not salvation from hell, people may think you’re nuts.

I suggest you start with Rom 10:13-14. It is easy for people to see that the salvation in view there is of believers, not unbelievers. Once you have that down, it is good to go to Rom 13:11. It is easy to see that it speaks of a future salvation, one that isn’t the same salvation as the past salvation of Eph 2:8-9. Possibly from there you can gradually show them what all thirteen uses of save and salvation mean in Romans.

1. The quotes in this article from Ken Hornok come from a workshop he had planned to deliver at the April 2014 GES Conference.

Bob Wilkin is Executive Director of Grace Evangelical Society. He lives in Highland Village, TX with his wife, Sharon. His latest book is Is Calvinism Biblical: Let the Scriptures Decide.

When Is the Right Time to Baptize?

When is the right time to baptize a child? And when should an adult be baptized? Listen in to Bob and Shawn’s discussion about what...
February 18, 2020

Mark 13 contains the famous Olivet Discourse in the Gospel of Mark. It starts off with the disciples being very impressed with the temple in Jerusalem....
February 17, 2020

Is Repentance a Change of Mind or Something More?

Today on Grace in Focus Radio, Bob and Shawn discuss what repentance is and what is required. Is repentance merely a decision to turn from...