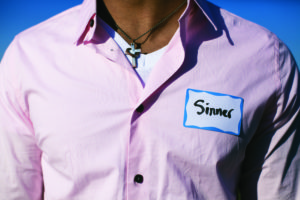 Yesterday I received a call from a pastor friend in Nebraska. Someone who attended his church took exception to him referring to believers as sinners. The man said, “Believers are saints, not sinners.” Evidently the man was coming from a Calvinist tradition. He thought that believers cannot stray very far or for very long. Thus, in his mind, it is wrong to refer to born-again people as sinners.

Martin Luther famously quipped that Christians are simultaneously justified and sinners (Simul justice et Peccator in Latin). That is certainly taught in Scripture (Rom 3:23; 4:4-5; 6:23). However, Reformation thought for the most part no longer accepts that believers are both justified and sinners. Due to the influence of Lordship Salvation, most Protestants today believe that one can be both justified a little sinner, but not justified and a big sinner. If that sounds like Catholicism, that’s because that is essentially the Catholic position on the matter.

And so with this formula Luther was saying, in our justification we are one and the same time righteous or just, and sinners. Now if he would say that we are at the same time and in the same relationship just and sinners that would be a contradiction in terms [emphases his]. But that’s not what he was saying. He was saying from one perspective, in one sense, we are just. In another sense, from a different perspective, we are sinners; and how he defines that is simple. In and of ourselves, under the analysis of God’s scrutiny, we still have sin; we’re still sinners. But, by imputation and by faith in Jesus Christ, whose righteousness is now transferred to our account, then we are considered just or righteous. This is the very heart of the gospel (http://www.ligonier.org/blog/simuljustus-et-peccator/).

There is some truth in that. And some error. More on that in a moment.

Sproul also says tellingly, “we still have sin.” That seems rather tame. How much sin? Do some believers become enslaved to sin?

Elsewhere in his writings and speaking ministry Sproul makes clear that he believes that no believer is characterized by sin. No believer is enslaved to sin. Believers do sin. But those sins are relatively rare. Believers in the Reformed way of thinking live transformed lives all the time—except for rare occasions when a believer might fall. But if a believer falls, he bounces back soon.

It is true that Christ’s righteousness is imputed to believers. That means positionally God sees even carnal believers as righteous positionally. However, as the Scriptures make clear, God views believers who are in the spiritual far country as being sinners in their experience.

There is no promise in Scripture that all believers will persevere in faith and good works. There is no promise that believers will live righteously or that they will be free from sin’s bondage in their experience. Yes, in our position we are no longer slaves of sin (Rom 6:14, 18). Yet we must present our members as slaves of righteousness in order for us to experience freedom from sin’s bondage (Rom 6:16, 19).

Before I close, I need to discuss the concept of sinner(s) in the NT. While the OT and NT clearly teach that all sin and fall short of God’s glory (e.g., Rom 3:23), the exact expression sinner(s) is mostly used in the NT to refer to those who are walking in rebellion against God, whether believer or unbeliever.

The few verses which might be exceptions are Rom 5:8 (“while we were still sinners, Christ died for us”); Rom 5:19 (“as by one man’s disobedience many were made sinners”); Gal 2:17 (“if…we ourselves also are found sinners…”); and 1 Tim 1:15 (“Christ Jesus came into the world to save sinners…”). But even those uses might have reference to those who are in rebellion against God.

James refers to a believer who has strayed from the truth as a sinner: “Brethren, if anyone among you wanders from the truth, and someone turns him back, let him know that he who turns a sinner from the error of his way will save a soul [or, life] from death and cover a multitude of sins” (Jas 5:19-20, emphasis added). That fits with the Parables of the Lost Sheep and the Lost Coin (Luke 15:7, 10). The sheep that repented was in the fold before it became lost. The same with the coin. They picture believers who stray.

I’m a sinner and a saint. I’m not a sinner in the sense of being in rebellion against God and straying from the truth. But I do sin. Daily. Hourly. I know that it is possible I might stray. Like the hymnist, I know I’m “prone to wander.” I pray that I do not become a sinner in that sense. The last thing I want to do is dishonor the name of my Lord and Savior and soon returning Judge (Jas 5:9). But I know that no matter what happens in the future, I have ever-lasting life that can never be lost. And that motivates me out of love and gratitude, to live a holy life, a set-apart life.

Finally, admitting that I sin is not the same as saying I am an egregious sinner in the NT sense. Still less is it an excuse for my sin. As Paul said, “Shall we continue in sin that grace may abound? Certainly not!” (Rom 6:1-2).

Bob Wilkin is Executive Director of Grace Evangelical Society. He lives in Highland Village, TX with his wife of 41 years, Sharon. His latest book is Tough Texts: Did Jesus Teach Salvation by Works? (co-authored with Zane Hodges).