Recently, my daughter Kathryn and I traveled to Zambia to teach at a Bible college. We taught two classes: one on the Book of Romans, and one on the doctrine of salvation. We had a total of 45 students who all spoke and understood English. We thoroughly enjoyed our time there and the lively discussions we had in class.

But we also enjoyed another part of the trip. The school has a medical clinic on the campus. There is a full-time doctor from America who provides treatment free of charge to the local population. This includes, for example, delivering babies. But during the time we were there, two ophthalmologists from the US volunteered their skills and removed cataracts from 61 people. Some of these people were completely blind. As a result of these surgeries, the blind literally regained their sight.

As I watched these surgeries take place, I was amazed. Without these free surgeries, the people treated would have had no hope. Such surgeries cost around three years of the average worker’s wages in Zambia. What these doctors provided was priceless.

I remember one man in particular. Because of his cataracts, he had been blind for seven years. Previously he had been a seamster, and through this work, he earned enough to feed his family, including two children. When he went blind, his wife had to take over as the breadwinner for the family. After the surgery, they asked what he was going to do now that he could see. He said he was going to go back home to sew so that he could feed his children.

I have a confession to make. Envy is a sin, but I have to admit that I was very jealous of the two doctors who were able to accomplish these things for these people. I found myself wishing I had the skills to perform cataract surgery. Imagine being able to make a blind person see. Imagine being responsible for the feeding of a family for years to come. I know that ophthalmologists have to put in years of training. But when you observe the things that happened on that campus, you can easily see why one would conclude that such sacrifice is worth the time, effort, and money.

Even though I was jealous, it didn’t take me long to see what was happening in a different light. Right down the road from that medical clinic there was another kind of eye surgery going on. Fortunately, we don’t have to be ophthalmologists to be a part of that work. 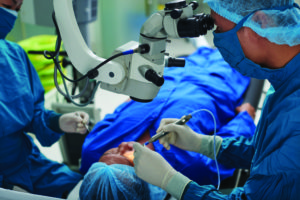 Like most countries around the world, Zambia is a place where Free Grace theology is not very prominent. That is what I found with the students Kathryn and I taught. When they spoke about the gospel that saves a person from hell, invariably they would add works to it. Either they believed you had to do works to keep your salvation or you had to do good works to prove you are saved. There is no assurance of eternal life possible in this world. In that sense, it is very much like the United States. What this means is that spiritual blindness is a problem. It is common to encounter people who have spiritual cataracts. They do not see that eternal life is given to a person as a free gift by God’s grace through faith in Christ alone and that such a life can never be lost.

In 2 Cor 4:4, Paul speaks of the problem of this blindness. Satan, the god of this age, has blinded the mind of unbelievers so that they cannot see the offer of eternal life by faith alone. Unfortunately, there are even believers, people who have believed the message of grace, who later have their vision clouded and lose sight of this wonderful message and the assurance that goes with it.

While teaching the classes, Kathryn and I were able to give a clear message of the gospel of grace. We were then able to show how the Bible supports that message. The students were very open to what was being said. In addition, thanks to certain donors, we were able to give Free Grace books to each student. They were also able to go onto the GES website and read articles, blogs, and journal articles they never knew existed.

And what was the result? At the end of the class, 44 out of 45 students said that they now knew that eternal life was something they were assured of, they could never lose it, and it was all by God’s grace through believing in the promise of Christ.

On the first day of classes, two former students spoke in the school chapel during a worship service. We had taught them two years ago, and they were now seniors. One started the service with a call to worship. He said, “As we start this worship service, we must remember one thing above all else. Eternal life is given to us as a free gift by faith in Christ alone. It is a gift we can never lose.”

The other student was chosen to give the student devotion. He spoke on Mark 8:34-38. He said that the most important thing to understand about this passage is that it is not telling us how to go to heaven. He went on to say that when Jesus speaks of the cost of following Him, it involves works. If a passage is talking about works in any way, it is not talking about salvation from hell.

These two former students, as well as almost all the new students, clearly saw the message of grace. They had had their spiritual cataracts removed. How did this “surgery” take place? Was it the discussions in class? Was it the books they received from GES? Was it from the website? Did any of these things compel them to search the Scriptures on their own? Maybe all of these things happened. The Holy Spirit could use any of them to perform the surgery that needed to take place. 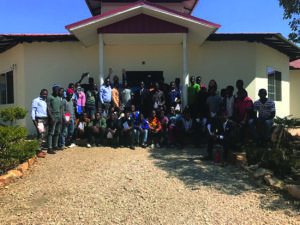 Perhaps you are like me. When you heard about the exciting work the ophthalmologists in Zambia did this past July, you wished you could be a part of that. The great news is you can. All of us who proclaim the message of eternal life by God’s grace through faith alone can be used by the Spirit of God to give sight to people who don’t see it.

We can all be spiritual ophthalmologists. And we don’t even have to go to Zambia to perform such work. As great as the work in the medical clinic in Zambia was, one day those same patients will lose their sight again. Either they will die, or maybe their cataracts will return. By contrast, the surgical work we can do results in sight that will last forever. That is exciting work indeed!