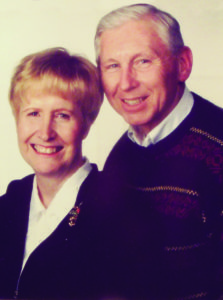 Dale was born two days before the United States entered into World War II. He went to be with the Lord on June 7th of this year. He was 72. Dale and his wife Diane first came to the GES annual conference in 1997 with their daughter Nancy. They came almost every year after that until this year when Dale’s health would no longer allow him to come.

Everyone at the conference loves Dale and Diane. They are so encouraging, so positive, and so committed to the Lord, His Word, and the message of life.

For four years Dale suffered under the effects of Parkinson’s disease. The first two years he came to the conference even though his health was not good.

The Boring’s have three daughters, Cathy, Linda, and Nancy. At Dale’s memorial service a letter from Nancy was read. In part she said,

Many times during his hospice care Dale would sing songs like Amazing Grace and the Doxology. As his thoughts became more jumbled, he would still say some amazing things, revealing where his heart is. One night Diane heard him say, “Great experience to trust You, to know your eternal circumstance is all taken care of… Faith alone in Christ alone. That’s all there is to it.”