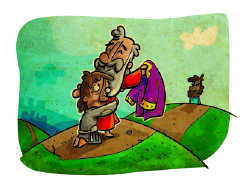 Who Is the Elder Brother?

After reading Luke 15 over and over, I’m still sure the prodigal son is a believer returning to fellowship with Christ. But the identity of the elder son honestly confuses me.

First, Jesus is telling the parable to the Pharisees who looked to their own self-righteousness. Could the elder son be referring to them?

Second, the elder son is in-fact, a son, and is “ever with me [the father], and all that I have is thine.” Doesn’t that mean he is a believer?

Putting those ideas together—is Jesus talking about a believer who is like the Pharisees (Gal 3:3)? Or is the elder son someone who isn’t a true believer and is relying on his moral fiber?

I feel like I am answering my own question with my second point, but at the same time, given the audience Jesus is speaking to, I’m still a little befuddled. I look forward to your response.

What an outstanding question. Since the Pharisees are mentioned in Luke 15:2, it is easy to conclude they are the audience the parable is addressing. Nevertheless, it is crystal clear that Luke 15 involves truths about believers. Why?

The lost sheep and the lost coin already belonged to the owner, the way a believer already belongs to God. They did not become the owner’s sheep or coin, the way an unbeliever becomes a child of God.

Likewise, the lost son was already a son before he became a prodigal, indicating he was already regenerate. Even the older brother is a “brother” of the lost son (see v 32). Jesus is not describing the unbelieving Pharisees by the Father’s words “you have always been with me and all that is mine is yours” (15:31). That is not true of unbelievers. Hence, the older son is an example of a believer.

That is also evident from the audience of the parables. Although, as you point out, the Pharisees are mentioned, they are not the primary audience. Chapter 14 ends with a discussion on discipleship (14:26-35), with the warning not to lose your “flavor” (v 34). Jesus is talking to believers and wants them to “hear” (14:35). It is these believers who come to “listen” to Him (15:1). He is speaking to “them” (15:3). Only a believer can lose his “flavor” by not following Christ. The parables in chapter 15 describes such “lost” believers.

All believers should have the same attitude of rejoicing when that happens. However, not all actually do. Some resent the return of such a “backslidden” believer into fellowship with God, and therefore act like the older brother. We resent God’s grace towards others. That should not be.

But the parables give a clear illustration of the heart of God in this matter. Returning to fellowship is a time of divine rejoicing, not bitterness.