As a sports fan, my favorite time of the year is the end of March. That is when the college basketball tournament, known as March Madness, takes place. Probably the major reason I enjoy it so much is it brings back to me memories of when I played on a high school basketball team.

Everyone likes being part of a team. I remember when I joined the Army my first assignment was with a parachute unit. Everything about that unit screamed that you were part of a team. We had the attitude that it was us against everybody else. Other people did not jump out of planes. Other people thought we were crazy. We called other people, those who were not part of our team, by the derogatory term “leg” (I still don’t know what that term means).

There were no women in the unit, so one could call it a men’s club. When a man joined he had to do certain things. First, he had to go to parachute school. Since the physical standards were higher than in other Army units, he had to maintain a certain level of physical fitness. There was also an initiation process the new members went through. It included a day of harassment, hazing, and physical exertion known as a “prop blast” (I have been told that this tradition has been forbidden in today’s Army).

Once a man became part of the team, there were certain things that identified him as being an Airborne soldier or paratrooper. He got to wear a special beret. There were certain things on his uniform that distinguished him as well. In addition, he wore his boots in a different way than “average” soldiers. In his wallet he carried a “prop blast” card, which verified to anybody who asked that he was a member of this team.

To a civilian, much of this sounds silly, or even childish. But I can testify that it felt good being a part of this group. We shared common hardships and experiences. In addition, we shared a long history with the paratroopers that went before us. We all knew the stories of heroes throughout the history of the unit. Sergeant Alvin York had been a part of the unit. Other heroes had jumped into combat and fought in places like Sicily, Salerno, the Netherlands, and Normandy. To put it simply, there was sense of pride being a part of such a team.

Not surprisingly, we all heard many speeches about how privileged we were to be a paratrooper. We were told we had the best leaders in the Army. We were to conduct ourselves in such a way that would never bring discredit to our organization. Everyone knew who we were by our uniforms so we had a responsibility to conduct ourselves in a certain way. 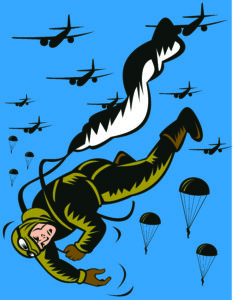 You’re Part of a Team

All of this is an illustration of what has happened to the believer in Jesus Christ.

When a person believes in Jesus Christ for eternal life, he knows he has this gift because Christ promises him that that is the case. As a result, he has passed out of death into life (John 5:24). In a very real sense, he has become part of a “team.” He now belongs to the “team” of those who have eternal life.

Paul says a very similar thing in Col 1:13. Speaking of all believers, he says that God has, “delivered us from the power of darkness, and has translated us into the kingdom of his dear Son.”

Of course, the New Testament is full of this teaching. The one who has believed in Jesus Christ for eternal life is now part of the body of Christ (1 Cor 12:13). The believer now has been justified before God and has peace with Him (Rom 5:1). The believer has been born into the family of God (John 3:7; Jas 1:18).

What glorious truths! What privileges the believer has! And, just like my experiences in the Army, Paul says that our lives should reflect who we are as part of Christ’s “team.” In the same context as 1:13, Paul prays that the believers he is writing to, “might walk worthy of the Lord unto all pleasing, being fruitful in every good work, and increasing in the knowledge of God” (Col 1:10).

This only makes sense. God has done so many wonderful things for the believer. These things are the result of His grace and can never be undone or taken away. The believer should desire to live a life of gratitude and praise for what God has done. Believers do not wear a special hat, or boots, or carry a card to show that they belong to Christ. However, we should desire to live our lives in such a way that others see Him in us and that others know what “team” we are on.

No Trades, No Transfers

I have used my time in the military as an illustration of what belonging to Christ is like. However, illustrations have limitations. The same is true in this case.

As much as I enjoyed being a part of the Airborne tradition and that team, I must confess it was temporary. After a few years, I moved on to non-Airborne units. I was no longer part of that team. Today, if I visited that unit, I would probably be called a “leg” by those that saw me.

Our “membership” with Christ, however, is completely different. For the believer, he will always be a part of Christ. There are no trades. There are no transfers. The believer will live forever with Him. Our leader, Jesus Christ, will never let us down. Whatever teams we may belong to in this life, the greatest of all is our union with the risen Son of God.