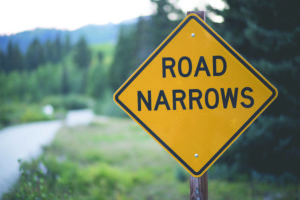 Someone sent me a link to a rather extreme Arminian preacher. Most who believe you can lose everlasting life think that people who believe you can’t lose your salvation still have a good chance of making it to heaven by persevering. However, this preacher thinks that the preaching of eternal security makes it very unlikely that the person believing that will persevere and make it to heaven.

The message is entitled, “Five Marks of the False-Grace Doctrine.”1

This statement got my attention:

The false grace or semi-universalist position is one that would adhere to the “once saved, always saved” position… My belief is actually quite the opposite. My belief is “once saved, rarely saved.” I believe the Bible is clear that the road is very narrow. It is not wide. And there are people who choose not to walk that narrow road. If we don’t conquer and if we don’t work out our salvation with fear and trembling, then certainly our salvation is at risk (29:02-29:40).

Such messages now strike me as extreme. But from ages 6 to 20, I was in a cult which taught that any sin can keep us from heaven. Not just the mortal sins of Catholicism and of the preacher in this video. Any sin. And not plural sins, either. In the group I was in, one sin committed after being saved resulted in loss of salvation, and you can never get it back. The group I was in would have said that this preacher holds to the “false grace or semi-universalist position.”

While this preacher probably has great intentions, he is preaching a false gospel, an accursed message (Gal 1:6-9). If he in the past believed the promise of everlasting life, then he has everlasting life. But he is under God’s temporal judgment in any case. And if he has not yet believed the promise of life, then he himself is on the broad way that leads to destruction. The broad way is not the way of sinful indulgence. The broad way is the works salvation way so prevalent in all the world’s religions, including, unfortunately, many within Christianity itself.

We who believe in OSAS (once saved, always saved) do not promote semi-universalism. Far fewer people believe the Free Grace message than the message of this preacher.

We who believe in OSAS do not promote licentiousness either. While I realize that there is a small number of Free Grace people who think believers today are under no laws and no commandments, that is not true of most Free Grace people. Instead, we call people to holiness. We are motivated out of gratitude to please God. We are motivated by a desire to have God’s blessings for us and our families and to avoid the curses that come for those walking out of fellowship with God (Luke 15:11-32). We are motivated by a desire to have the Lord’s approval at the Judgment Seat of Christ (2 Cor 5:9-10). We want to be a blessing to others.

Once saved, rarely saved? Hardly. Once a person has everlasting life, he has it forever. After all, as one of my seminary professors, Dr. Charles Ryrie, liked to say, “If everlasting life could be lost, then it has the wrong name.”