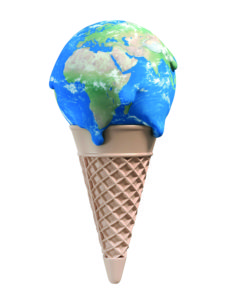 I have a confession to make. It is a confession that marks me off in many circles today as both an ignorant and an evil man. But it is: I am simply unwilling to believe the preachers of global warming.

I have heard their sermons many times. Man has caused the world to warm. As a result, polar bears are dying. The seas are rising. The ice is melting. If something is not done man will destroy the earth.

These preachers of doom and gloom bring forth the evidence. We see polar bears standing on a small patch of ice. They show complicated charts apparently showing changes in temperatures and other atmospheric conditions. Pictures are shown depicting what coastal and tropical areas will look like in just a few decades. Forests will be deserts, and cities along the coast will be under water. There are a host of scientists that confirm our dire future. Books are written by people like the former vice-president of the United States warning us about what is going to happen. President Obama said it was the most important issue facing our nation, and indeed the world, today.

But I am unwilling to consider that their evidence is valid. Why? There are a host of reasons. Primarily, as a believer in Jesus Christ, I don’t believe man can or will destroy this world. The Bible says that God Himself will destroy the world after the Millennial Kingdom. It is not until then, at least 1007 years from now, that there will be a new earth.

There are other reasons as well as to why I am unwilling to believe in the evidence supposedly supporting man-made global warming. One is my past. I remember well when I was a teenager many scientists were saying an ice age was coming. They had their charts and pictures “proving” time was short indeed. It would be like the time when the dinosaurs died off. Mankind would not survive. The world was getting colder.

Another reason is that many times I do not have much confidence in those giving the evidence. In some cases I think there is a political agenda. In other cases I think it is just the accepted mantra of the day and people who are concerned about the environment genuinely feel they are doing what they can to save the world. If we can use enough solar panels and drive smaller cars we will be able to deliver ourselves from disaster.

A further reason is that their prophecies have proven false. For example, I remember, not too long ago, that one expert on global warming said the world would be destroyed by 2015. Similar predictions abound today, with the date moved back a little further.

Finally, in some cases, the preachers of this message do not even believe what they are saying. The former vice-president tells us we must decrease our carbon footprint while he travels in personal jets, lives in a mansion, and has a fleet of very large cars. He has the carbon footprint of a small country. In addition, he has become extremely wealthy preaching this message. Why the need for tons of cash if the world will not exist in a few years?

It should be noted that I did not say I couldn’t believe in global warming. I said I was unwilling to do so. There is a difference. I am certainly capable of doing it. Maybe in the future I will no longer believe what the Bible says about the end of the world and I will meet global warming enthusiasts I trust. Maybe then I would be willing to look at the evidence and become a believer.

But right now, I am not willing to consider the evidence. My past, and my skeptical attitude towards those who preach that message, cause me to either ignore or outright reject what they say.

The same principles apply when it comes to believing in Jesus Christ for eternal life.

There is a strange teaching that I first encountered in seminary. It is that an unbeliever cannot believe in Jesus Christ. He is unable to believe. God must give him or her faith. In fact, the unbeliever must be spiritually saved before he can believe. In his recent book, Bob Wilkin refers to one theologian who said that he knew a man who was a Christian 65 years before he believed!

A statement like that is silly on its face. Nobody reading the NT, especially the Gospels, can come away with the idea that people cannot believe. Jesus rebukes those who did not believe in Him during His day, and calls people to believe. That would not make sense if these people could not believe. When God reveals the truth of the message of eternal life to people, the unbeliever is able to believe it. Whoever denies that, does so only because their theological system requires them to do so.

But it is something else to say that an unbeliever may be unwilling to believe. The Bible says that this is indeed possible. Many people are unwilling to consider the evidence for the truth of the gospel, just as I am unwilling to consider the evidence for climate change. Perhaps their past makes them unwilling. Perhaps they do not find reliable the one who tells them about eternal life through Christ alone. Or, perhaps they do not consider Christ as reliable. Like my feelings towards the former vice-president, perhaps an unbeliever has strong reservations about the motives of a Christian evangelist, or of Jesus of Nazareth Himself!

Jesus ran into people just like that in John 5. In this chapter He has a conversation with the religious leaders. The Lord says to these men that they were not willing to come to Him (5:40). The phrase “come to Jesus” meant to believe in Him (cf. John 6:35). They were unwilling to believe in Him. Why was that?

One reason was they did not see Him as one sent from God. Later, in John 7:52, the religious leaders point out that no prophet had ever come from Galilee, where they believed Jesus originated.

In addition, Jesus was not doing what they expected. Yes, He had healed a man who had been paralyzed for 38 years, but He did it on the Sabbath (5:1-16). This went against their traditions.

Jesus’ message also went against their tradition. He preached that one received eternal life simply by faith in Him (5:24). This went against their view that entrance into God’s kingdom was accomplished by good works and keeping the Law of Moses. These men studied the Scriptures to find out what good works they needed to do in order to live in the Kingdom (5:39).

Another problem these men had with Jesus concerned their pride. They loved the honor they received as a result of their positions as religious leaders within the community (5:44). Jesus’ teaching threatened their standing as leaders. If what Jesus was teaching was true, they would be in danger of losing what was important to them.

Jesus gave them clear evidence that He was the Messiah. He had performed many miracles through the power of God. Not only did He heal the paralyzed man in Jerusalem, He had healed many more (John 2:23). He had even healed one boy over a long distance away (4:46-51). In addition, they had heard His amazing teaching (3:2).

The same is true for us today. There are some people who at this time are simply unwilling to listen to the evidence. That may be because of their background or some other reason. But whatever the case, they are unwilling to believe.

It seems to me that in the United States this is becoming more the case. We were never a Christian country, but in the past there was a greater respect for its teachings. It was held in higher regard. People were more willing to give it a hearing.

However, today that is changing. With the dominance of postmodern thought, many do not easily entertain the idea of absolute truth of any kind, including the truth that Jesus gives eternal life through faith in Him alone. However, we must proclaim that message. We must also remember that God is revealing the message to people who now are unwilling to believe, just like He did with the Jewish religious leaders. Once they are willing to consider the evidence, they can believe. In some cases, they will be convinced that the evidence is true. At that point they will believe.

Ken Yates is Editor of the Journal for the Grace Evangelical Society and GES’s East Coast speaker. He lives in Columbia, SC.

In Luke 5:27-31, the author records the calling of the tax collector Levi (Matthew) by the Lord to be one of His disciples. This offends...