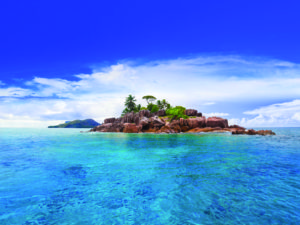 In 1624, English poet John Donne wrote a poem whose first line reads, “No man is an island entire of itself…” He went on in the same short poem to write, “any man’s death diminishes me, because I am involved in mankind. And therefore never send to know for whom the bell tolls; it tolls for thee.”

Donne was born and raised a Catholic. However, as a young man he became an Anglican and later a chaplain and pastor. He wrote “No man is an island” during a time of poor health that plagued him until his death seven years later.

His poems and phrases lost the attention of popular culture until 1940, when Ernest Hemingway wrote For Whom the Bell Tolls. Then in 1962 a movie was made entitled No Man Is an Island. It was about the lone American who evaded capture by the Japanese during their 3-year occupation of Guam. After that movie, the phrase became well known by all American school children.

Donne’s point is we all impact each other. That is, of course, a truth found in Scripture in terms of the local church.

If local churches are functioning as they should, then we each build each other up. We are not judging the consciences of other believers. We are pursuing peace with one another. We are seeking to edify each other. We aim to be well pleasing to God and approved by our fellow Christians.

While we each will be judged by Christ separately at the Bema, we must realize that how we treated others, especially those in our church, will play a big part in our judgment at the Bema.

Romans 14 is one of the places in the NT from which the idea that no man is an island comes. The issue in chap. 14 concerns doubtful things, also called opinions (Hodges, Romans, p. 401), disputable opinion (Longenecker, Romans, p. 986), and non-essential issues (Lopez, Romans, p. 263). Longenecker says that Paul is talking about “matters that are neither required of nor prohibited to believers in Jesus” (Romans, p. 1001).

So, Paul is not talking about issues like premarital sex, adultery, homosexuality, wearing skimpy clothing at church, getting drunk, etc. All those things are clearly prohibited in the Bible. Those who violate Scripture are to be held accountable by the elders in the local churches. Instead, Paul is talking about things neither commanded nor forbidden.

Romans 14:10-12 is one of only two places in the NT that uses the expression the Judgment Seat of Christ (cf. 2 Cor 5:9-10). The day is coming when believers will be judged by Him to determine our eternal rewards.

Hodges says, “Any serious consideration of [the fact that we all are subject to final accounting before Christ] should cause us to focus on our own day of accounting, rather than the presumed failures of other Christians” (Romans, p. 412).

In most Greek manuscripts, there are three more verses here, Rom 14:24-26, at the end of the chapter. They are found in the English translations as the last three verses in the book (Rom 16:25-27). Of course, that is odd since Rom 16:24 sounds like the close of the letter, “The grace of the Lord Jesus Christ be with you all. Amen.” Why a double ending?

These verses are a fitting conclusion to chap. 14.

Whenever a matter is neither commanded nor forbidden by Scripture, we are to be at peace with other believers who have a different opinion. This is true of eating meat, drinking wine, observing Jewish feast days, men shaving their heads bald, men having beards, women wearing makeup, women (or men) wearing jewelry, wearing sandals to church, etc.

No one is an island. The Lord is with us in this life. And He wants us to love and encourage and edify the other members of His forever family.

We will give an account to Him one day for all our actions, including how we treated one another in our church. Let’s live considering His soon return and our judgment by Him at the Bema.