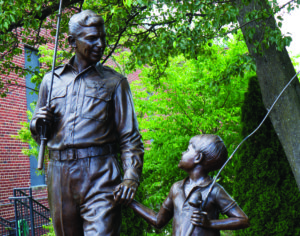 USOM. My guess is that these four letters mean absolutely nothing to anybody reading this magazine. But they mean a great deal to me, even though I don’t know what the letters stand for.

USOM was the name of the very small military installation I lived on when I lived in Pusan, Korea as a boy of 12-14 years old. My father was in the Army and was assigned there. It was like heaven on earth.

The main installation was about a quarter of a mile away. But about 12 families lived on USOM. These 12 homes, along with some playground equipment, were all that was located on this small base. In this area of the world, there was no crime. Each family had children my age. We all became close friends. We walked to school together. We played baseball together. In the evening we would play hide and seek and other games outside. We visited each other’s homes on a daily basis. It was an idyllic world, and it is safe to say that none of us had a care in the world.

It reminded me of the television show The Andy Griffith Show. This show was televised in the 1960s. Sheriff Andy Taylor and his son Opie were the stars. It took place in the small fictional town of Mayberry in North Carolina. Crime was non-existent. Even though the war in Vietnam was taking place in the 1960s, it was never mentioned on the show. Everybody knew everybody else in town. All the people took care of each other. Like my experience in USOM, Opie lived the perfect life. The show was very popular and many television critics said it was because it provided a half hour each week for the viewer to escape whatever problems they were having in their own lives and cities.

USOM was my Mayberry. But it was a real place. It was a very sad day when I had to move and leave my friends in that wonderful place.

A Chance to Return

As you might expect, through the years I told friends and family back in the United States about my time in Mayberry. Of course, they could not relate to the fond memories I had of that place. I always held out the hope of one day visiting the place I knew as USOM.

Thirty years later I got the chance. I was in the Army myself and was stationed in Korea. I was given the opportunity to preach at the chapel on the main installation. I would only be about 400 yards from USOM!

When I arrived on the installation, the first thing I did was walk toward my childhood home. I turned the corner that started the climb up the small hill to my old community. I couldn’t believe what I saw.

All 12 houses were gone. The place was overgrown with weeds. Under about 10 feet of weeds I found some of the playground equipment I had played on three decades earlier. It was now a slum of the city of Pusan, Korea. There were some homeless people who lived there and trash was all over the place. It was obvious that it was a garbage dump.

There was a Korean there who spoke some English. I asked him what this place was. He told me that some years ago a woman was murdered on the hill. The Korean’s believe the place is haunted and didn’t want to live there. All the buildings were old and falling down so they tore them down and carted them away. The US military no longer has any presence at the place that used to be called USOM. Only the down and out in the large city of Pusan stay there, living in the garbage.

My experience reminded me of a skit I saw on the comedy show Saturday Night Live. Ron Howard, who played Opie on The Andy Griffith Show, was an adult. During the skit he told everybody how great Mayberry was. He had the chance to return.

But it was nothing like what Opie remembered. When Opie returned as an adult he looked up his old friends. Mayberry had turned into a crime infested town! Main characters of the show had turned into drug dealers and alcoholics. It was not safe to walk around. On the original show, Sheriff Taylor didn’t even need to carry a gun. Now, the streets were filled with gun violence.

The humor, of course, was based upon the fact that everybody understood that Mayberry had been the exact opposite of these things. It was shocking to see “goodie two shoes” selling drugs on the corner of Mayberry or packing heat. Imagine seeing a show in which Mother Theresa was presented as a prostitute and you will get an idea of the contrast the skit was showing.

That is an illustration of the contrast I saw when I returned to USOM. But I have to tell you, I found nothing humorous about the situation. Instead, it was depressing and forever changed fond memories of my childhood.

Aren’t We All Opie?

Opie’s experience was all based on a fictional show and a fictional comedy skit. But when we think about it, perhaps every adult reading this article can relate to that experience. In my case it was USOM.

But all us of know what the comedy skit was saying. Things don’t stay the same. We know the truth of the saying, “you can’t go back home again.” If any of us go back to a place we have fond memories of, we will all find that it is not what we remember. I should have realized that when I returned to Korea. In my mind I thought I was returning to the early 1970s. In my defense, perhaps the shock was just how different it was.

The Bible, of course, tells us why this is the case. The world is cursed by sin. No matter how good a place might be, it will change. In most cases we can vividly see the world we live in getting worse.

In any case, there is nothing permanent about this world. The Lord said, “heaven and earth shall pass away” (Mark 13:31). John says that this world is passing away (1 John 2:17). Peter says the day will come when the elements that make up this world will be destroyed by fire (2 Pet 3:10).

The lesson is clear. We should not place our hearts in the things of this world, due to its changing and temporary nature. We should lay up treasures in the world to come (Matt 6:20). Our hearts should be on those things (Col 3:2).

The Real Mayberry Is Coming

The book of Revelation, the last book of the Bible, ends with John describing the new earth that is coming (Rev 21:1). Believers will not live in some misty existence in the sky. Instead, we will live on an actual earth.

To put it simply, an eternal USOM and an eternal Mayberry is coming. They will not change for the worse. I spent three decades wanting to return and see a place I lived in as a young boy. I was disappointed. I would have been better served by longing to see the world to come. We all would.

Ken Yates is Editor of The Journal for the Grace Evangelical Society and GES’s East Coast speaker. He lives in Columbia, SC and pastors Little River Baptist Church in Jenkinsville, SC.