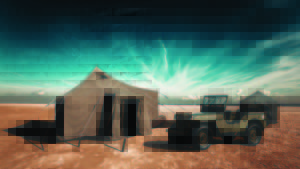 Recently I spent some time looking at a beautiful Psalm written by David. This Psalm, Psalm 15, reminded me of certain events during my career in the army. I also realized that this short Psalm has a direct application for Christians today.

In the first verse, David asks a question. He wants to know who can “abide” in the tabernacle of the Lord and “dwell” in His holy hill.

In the time of David, there was no temple. The presence of God was symbolically located in the tabernacle. The tabernacle was a tent-like structure that was located on a hill in Jerusalem. This hill was holy because God had decided to “reside” there.

The verbs “abide” and “dwell” in this verse indicate the ability to worship God. David wants to know who can approach God in worship and have fellowship with Him. Who can do these things in the tent of the Lord?

It is a great question. The One in that tent had created the universe. He was perfectly holy. He had redeemed the Jewish people through His power from slavery in Egypt. He had made them victorious in battle. How could any Jew hope to commune with Someone that great and holy?

This reminded me of my time in the military. Whenever we would train, we would go to what is called the “field.” That is another way of saying the woods. In the woods there was always a tent known as the TOC, which stood for the Tactical Operation Center. Most soldiers did not like to be near the TOC because that is where the boss spent his time. You were in danger of saying or doing something that did not meet his approval. Perhaps your uniform was not what it should be. As a result, the usual practice was to stay as far away from the TOC as possible.

Imagine a Jew in David’s day who looked at the tent where God Himself resided. He is certainly greater than any military leader. It would be easy to adopt the attitude that such a location was to be avoided. However, the fellowship one could have with Him would certainly be great.

The Psalm ends by saying such communion was well worth the cost. The person who abides in God’s tent would experience a life that could “never be moved.” David certainly means that such a life would be well grounded. It would be a life wisely lived.

But what were the requirements? David lists ten of them.

The first three requirements are found in v 2.

First, David says that the one who wanted to have fellowship with God must have a blameless character. He must “walk” or live his life in an “upright” manner. The word “upright” means without defect. This is done by doing, second, “works” of righteousness. This refers to keeping the Law of Moses.

But it was not enough to simply do the actions. One’s heart was involved. The heart reveals the character of the worshipper. The actions and even words of the worshipper must come from, third, a heart that is “true.” David drives home the fact that the one who is worthy to abide with God in His tent must be holy in his speech.

In v 3 David gives the fourth requirement. It is that he does not sin with his “tongue.” He does not gossip or slander others.

The fifth requirement tells us that this slander must not be directed at our “neighbor.” Such use of the tongue causes “evil” or harm to those around us. We must not do anything in word or deed that hurts others. Instead, we must desire what is good for them.

The sixth requirement also involves our use of language. The one who wants to have fellowship with God must not “take up a reproach” against his friends. The word reproach carries with it the idea of a taunt, or to scornfully treat someone. Words must not tear down but build up.

In v 4 David says the seventh requirement is that we must have the proper view of reality and spiritual things. We must see that an unrighteous, or “vile,” person engages in “despised” things that are of no value. The person who fears the Lord is one that should be honored. Of course, this is the exact opposite of how the world sees things. Often times, people who live unrighteous lives are held up in high esteem in the eyes of the world.

The eighth requirement says that the righteous person must keep his word. When he says he will do something he does not “change” his mind even if keeping that word will result in “his own hurt,” that is, it will be costly to do so.

The last two requirements are found in v 5 and address how the righteous person interacts with the less fortunate around him. He does not lend money to the poor in order to get back interest. He does not take money or a bribe from those in high positions in order to harm the “innocent,” those who perhaps do not have money. He refuses to place the interests of those with power and influence over those who do not possess these things.

In summary, those who want to “abide” in the tent with the Lord must meet a number of difficult requirements. They must live righteously, keep God’s commandments, have a pure heart, control their tongue, build up instead of tear down others, value spiritual things and not the things of the world, always keep their word, help those who are less fortunate, and show no favoritism. My guess is that the worshipping Jew in David’s time would have felt these requirements were impossible to meet. 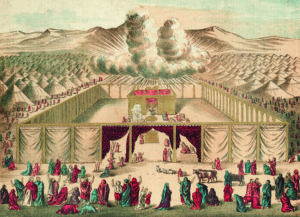 That Is the Point

A person simply could not meet these demands. David himself did not. But that did not mean that one could not worship the Lord in the OT. The OT person was saved by believing in the coming Messiah. The Law and the sacrifices played no part in eternal salvation.

However, the Law and sacrifices did play a part in the worship of the Lord. A Jew who looked at the Law would see that he did not meet the 10 requirements of Psalm 15. This, in turn, produced a heart of humility. God wanted the believer to approach Him with that attitude. The sacrifices were performed with the understanding that the worshipper fell short. Through them, the Jew could experience a forgiveness which made communion with God possible.

Today, a person also receives eternal life as a free gift. But what about those who desire fellowship with God? The death of Christ makes that communion possible, but our actions fall way short. For example, James tells us that none of us can control our tongue. The Lord told us that sin is not just found in our actions, but also in the thoughts of our hearts. Which one of us can say that we do not show favoritism or that we love our neighbor as much as we love ourselves?

The book of 1 John is a book that tells us how we, as Christians, can “abide” with God and have fellowship with Him (1 John 1:1-4). The sacrifice of Christ not only makes the gift of eternal life possible, it also makes that fellowship possible (1 John 1:7-9). Like the reader of Psalm 15, we recognize that we fall short of what God requires in our daily lives. When we do, we confess our sins and God gives us a daily cleansing that makes communion with our holy heavenly Father possible.

When I was in the army, the TOC was not an inviting place. In fact, it was somewhat scary. Imagine in David’s day what the TOC of the Lord, the tabernacle, must have seemed like to the Jew who desired to commune with God. The NT tells us that the tent in David’s day was a copy of the real thing in the heavens (Heb 8:2). We, as believers, can enter into the real tent of the Lord and have communion with Him through Jesus Christ (Heb 4:14-16). We can boldly do that with no fear.

We do that with the desire to live righteous lives through the power of the Spirit of God that lives within us. But we also do that with the humble recognition that we will still sin as long as we are in these mortal bodies.

That is the kind of attitude and life that “shall not be moved.” Jesus said the same thing in the Sermon on the Mount. Those who listen to His words and do them will be like those who build their lives upon the solid foundation of a rock (Matt 7:24). It is a wise Christian who spends time in the TOC of the Lord.