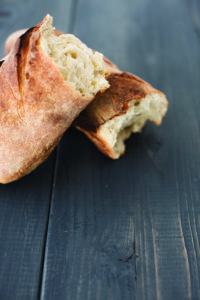 “Do not labor for the food which perishes, but for the food which endures to everlasting life, which the Son of Man will give you, because God the Father has set His seal on Him.” Then they said to Him, “What shall we do, that we may work the works of God?” Jesus answered and said to them, “This is the work of God, that you believe in Him whom He sent” (John 6:27–29).

Jesus had just fed 5,000 men, plus women and children. He had provided them with food. However, like the water from the well in John 4, that food was only a temporary solution to their physical needs.

As becomes clear later, the audience wants the Lord to give them a continuous supply of food to eat (John 6:34, “Lord, give us this bread always”).

The Lord is not saying in John 6:27 that it is wrong to labor for one’s daily bread, which is food that perishes. What He was saying is that it is much more important to labor for food which endures forever.

His audience—unbelieving legalists—is confused. They think He is saying that if they do the right works, they will earn everlasting life. They ask, “What shall we do, that we may work the works of God?” (John 6:28). Jesus’ response is not what they expected: “This is the work of God, that you believe in Him whom He sent” (John 6:29).

For anyone familiar with John’s Gospel up to this point, this is a straightforward statement that the sole condition of everlasting life is faith in Christ. Not works which we may do, whether before or after the new birth. Ephesians 2:8-9 grows out of the Lord’s teaching.

However, what you discover when you look at commentaries on John is that the Lord’s words in vv 27 and 29 are only partially understood by most commentators.

Food that Endures to Everlasting Life

Considering the question asked in John 6:28 and the Lord’s answer in John 6:29, the audience misunderstood (see Carson, John, p. 284). They thought the Lord was challenging them to labor to produce good works that would result in them having everlasting life.

But why would anyone need to labor for that food? We don’t have to labor to receive gifts, do we? Isn’t that what Rom 4:4-5 says?

It might be relatively easy to come to faith in Christ if you grow up in a home that teaches the faith-alone message. But it is hard for most people to believe a message that is widely rejected even among people who call themselves Christians.

The Jews of Jesus’ day were steeped in works salvation. They thought that good Jews got into the kingdom (cf. Luke 18:9-14; Acts 15:1; Gal 1:6-9). For people in such a culture, it might take effort to receive Jesus’ message. They are concerned about doing the right works. They are not concerned about the singular work of believing in Jesus.

Remember that Jesus said, “Strive [agōnizesthe] to enter through the narrow gate, for many, I say to you, will seek to enter and will not be able” (Luke 13:24).

Tasker says that the Lord either was talking about “the food which endures…and results in eternal life” or “the food which lasts to eternity” (John, p. 99). The latter option does not contradict the faith alone message. The former option would contradict the faith-alone message of John 6:29, unless Tasker meant that it results in fullness of eternal life (but that’s not what he meant).

The Son of Man Will Give You Everlasting Life

The audience did not yet have everlasting life. But anyone in the audience who did “the work of God” would have it immediately.

Everlasting life is a present possession for the believer.

What Did Jesus’ Questioners Think the Works of God Were?

They expected to hear some of the Ten Commandments and maybe more of the Law of Moses. They surely hoped for the Lord to identify a few of the most crucial commandments.

When the Lord did not talk about works (plural), they were surely surprised.

Why Did Jesus Speak Instead of the Work, Singular, of God?

The works are plural works.

The work is singular.

The Lord specifically identifies what “the work of God” is—believing in Him.

The other possibility, which seems most likely to me, is that the Lord means that the only action that a person can do to obtain everlasting life is to believe in Him.

Is believing in Jesus Christ an action? Of course. Anytime we believe, we act. While it is a passive action, it is action, nonetheless. And it may take some effort on our part to hear the right message. If there are false messages out there, we need to take care that the one we believe is indeed the true message from God.

Why would the Lord pronounce a blessing on Peter for his belief in Him? “Jesus answered and said to him, ‘Blessed are you, Simon Bar-Jonah, for flesh and blood has not revealed this to you, but My Father who is in heaven’” (Matt 16:17). Peter had something to do with it. Compare Acts 13:46, where Paul rebukes a Jewish audience for rejecting the gift of everlasting life. See also Luke 13:24, discussed above.

But regardless of how hard or easy it is for us to believe, believing in Christ is not works.

Commentators often make helpful observations. But not always. The comments found in most commentaries on John 6:27-29 are a mix of helpful and hurtful.

As mentioned above, Tasker suggests that the Lord might mean that the audience was to labor for “the food which endures…and results in eternal life” (John, p. 99). While he does mention a second option, it is disconcerting to see the first option put forth as viable when it is contradicted by the verses which follow (John 6:28-29) and by the entire faith-alone message in John’s Gospel.

Leon Morris, often quite insightful in his comments, mixes in great comments with confusing ones. He says, “There is another kind of food, that which remains forever and issues in eternal life…If they seek this food, then the Son of Man will give them eternal life” (John, p. 359). That is confusing.

Again, Morris makes a great comment, “But one thing is needful. That this one thing, He makes plain, is faith” (p. 360). Unfortunately, he immediately follows that up with this confusing statement, “They must believe on Him; the present tense here denotes the continuing attitude, not the once-for-all decision” (p. 360).

Raymond Brown mixes in terrific and puzzling comments. He says, “Jesus, in turn (vs. 29), puts the emphasis on faith [terrific]. Paul and James are the NT names we associate with the problem of faith and works [puzzling], but here we have the Johannine solution. Obtaining eternal life is not a question of works, as if faith did not matter [terrific]; nor is it a question of faith without works [puzzling]…Acts 16:30-31 shows a scene in the early Church life that illustrates for us the lifesituation in which vss. 28-29 of John 6 would have had meaning and would have been preserved [terrific]” (John, Vol. 1, p. 265).

In 1553, John Calvin wrote a commentary on John. His comments on John 6:27-29 are a mixture of clarity and confusion. His comments on v 27 are confusing. He says, for example, that “Christ points to eternal life as the goal of our lives” (John, p. 153). If he were talking about the reward of fullness of everlasting life, that would be correct. But he is talking about the mere possession of everlasting life as a gift.

His closing comment on v 29 is excellent, “[Faith] is, if we may use the expression, a passive work, for which no reward is given, and it gives people no other righteousness than what they receive from Christ” (John, p. 156).

There is a lot of confusion in the Christian world about the saving message. Faith itself is under attack today. No longer is believing in Jesus merely believing in Him. Instead believing is turning from sins, surrendering to Jesus, and resolving to obey Him. Faith has become a work for many today.

The Free Grace position unlocks the meaning of Scripture. I’m so thankful I came across a professor named Zane when I was just starting out in my seminary studies.