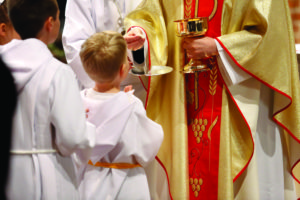 Since that time, I’ve met many in Free Grace circles who agree. There are many Free Grace people who call Lordship Salvation preachers our brothers in Christ and who regard their evangelistic message as a saving message.

GES had a big falling out at our 2006 annual conference, our biggest ever. Zane Hodges and Bob Bryant said in plenary messages that assurance is of the essence of saving faith. Actually, Zane gave a similar message back in 1997 at our annual conference. And he had written about it many times. But in 2006, the issue sparked a fire.

I remember talking with Zane Hodges about this. Why is it that for twenty years we’d all been united, and now suddenly we were divided? His answer was very insightful, in my opinion. He said, “At the start we were united around what we disagreed with, Lordship Salvation. Now we are divided about what we agree with.”

I think that most of the people who said they were born again before they believed their salvation was secure would say that Lordship Salvation is a saving message. (As an aside, they all indicated that they had come to believe that they are secure. They just thought that gaining that belief was a nice sanctification bonus, not a condition for the new birth. I’d say they all were born again when they believed that their salvation was irrevocable, not when they prayed some prayer, walked an aisle, gained a love for God’s Word, stopped cussing, felt a feeling, or even believed that Jesus is God and that He died for our sins and rose again. I think they have a flawed understanding of when they came to faith.) Indeed, many if not most of them would say that they were born again under a Lordship Salvation message.

How can this be if Lordship Salvation proclaims a faith-plus-works message? Some (many?) in Free Grace circles believe the following is true: Anyone who believes that Jesus is God and that He died on the cross for our sins and rose bodily from the dead on the third day is born again.

Well, Lordship Salvation people believe that. So do Roman Catholics, Eastern Orthodox, Church of Christ, Assemblies of God, and so forth. Most who call themselves Christians believe that.

Now there are plenty of Free Grace people who say that it is not enough to believe in the deity of Christ and His substitutionary death and resurrection. One must believe in Him for everlasting life (John 3:16; 5:24; 1 Tim 1:16). If a person believes in Jesus’ deity, death, and resurrection and yet believes in Lordship Salvation or works salvation, he is not yet born again.

However, there are many more who call themselves Free Grace who think that Lordship Salvation is a saving message.

What do you think? Is a person born again if he thinks that faith in Christ is not enough to be born again? If a person believes you must also surrender to Christ, commit to Him, turn from all your sins, and persevere in following Him until death, is he believing the saving message?

Remember Paul’s words in Gal 1:6-9 about those Judaizers who were proclaiming in the churches of Galatia what he calls a false gospel. Lordship Salvation is essentially the same issue that got the Apostle Paul fired up! The Judaizers certainly preached the deity, substitutionary death, and bodily resurrection of Jesus from the dead. If they had not, they never would have received a hearing in the church of Galatia. But they preached that a man had to be circumcised and keep the law of Moses to make it into the kingdom (Gal 5:4; cf. Acts 15:1). So, too, Lordship Salvation people today say that you must submit to Christ, turn from your sins, commit yourself to lifelong obedience, and then if you follow through and do persevere to the end, you will gain kingdom access. While that is not exactly the same message, it is cut of the same cloth.

Lest anyone misunderstand me, before I close I will say a word about my understanding of the spiritual condition of Lordship Salvation people. I believe that some of them are born again and some of them are not. The born-again ones are those who at some time in the past believed the faith-alone-in-Christ-alone message. Then they were later misled. For example, I believe John MacArthur falls in that category. The ones not born again are those who have never in their lives believed in Christ alone for everlasting life.

Is Lordship Salvation a saving message? No. It is not. That is why it is so important that we share far and wide the promise of life.

Bob Wilkin is Executive Director of Grace Evangelical Society. He lives in Highland Village, TX, with his wife of 42 years, Sharon. His latest book is The Power of Repentance (available soon).