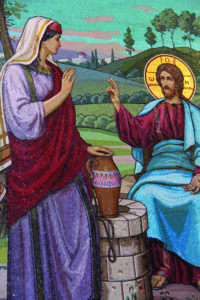 I received this email question from a reader:

In the article “The One Who Believes: Is Continuous Faith Required to be Born Again?” by Bob Wilkin in the second footnote regarding John 4:13, Wilkin mentions:

“Amazingly, Wallace says ho pinōn here means, ‘everyone who continually drinks…,’ ibid, p. 621, text. Of course, he must say that since he recognizes, though does not say, that ho pinōn is a synonym for ho pisteuōn, which he has already said refers to continuous belief.’

While I found Bob’s article very helpful, can you please elaborate a bit more on how we know that ho pinōn here does not mean “everyone who continually drinks…,” but rather means everyone who drinks once, i.e. one drink would quench your thirst forever? Hope you can help.

We sometimes are led to believe that the Greek present tense means that continuous action is taking place. That is not true in the indicative mood (e.g., he drinks). It sometimes refers to such action. The context, not the verb tense, tells us.

And it is not true for articular participles, either (e.g., he who drinks or everyone who drinks). There are two rock-solid proofs that the drinking in John 4:13-14 cannot mean he who continually drinks. (John 4:14 uses an aorist subjunctive, but it clearly is used synonymously with ho pinōn in John 4:13. So in this article I sometimes speak of John 4:13, but clearly the same point is true of v 14.) But before I get there, let’s see proof of the fact that the present tense in the indicative mood and in participles need not refer to continuous action.

The present indicative often does not refer to continuous action or even to action taking place in the present. Wallace himself lists instantaneous presents (also called punctiliar presents) where present indicatives refer to “an action [which] is completed at the moment of speaking. This occurs only in the indicative. It is relatively common” (Greek Grammar Beyond the Basics, p. 517). Examples he gives are Mark 2:5 (“your sins are forgiven”); John 3:3 (“I say to you”); Acts 9:34 (“Jesus Christ heals you”); Acts 25:11 (“I appeal to Caesar”). Wallace also lists progressive presents which refers to “a scene in progress” (p. 518). This too is not action that is continuous. It is ongoing, but has a definite and soon stopping point (e.g., Matt 25:8; Mark 1:37; Acts 2:8; 3:12; Rom 9:1).

Present articular participles often do not refer to continuous action.

Wallace says that in the case of anarthrous participles, they “behave just as they do in the indicative [except] now the point of reference is the controlling verb, not the speaker” (p. 614). See above paragraph to see how indicatives are used in the present.

Concerning articular participles, he speaks of some that function as adjectives and some that have a substantival use: “It functions in the place of a substantive[noun] ” (p. 619). That is the category in which he gives the example of John 4:13. Many of the examples he gives clearly do not refer to continuous action: Mark 6:44 (“those who ate the loaves”); Luke 1:45 (“blessed is she who believed”); John 6:39 (“this is the will of the Father who sent me”); Acts 1:16 (“those who arrested Jesus”). However, those are all aorist articular participles. But he also mentions 2 Thess 2:6-7 regarding “the one who is restraining.” That is a present articular participle and it does not refer to ongoing continuous action since Paul says that the restrainer will be taken away during the seven years of the Tribulation: “until He is taken out of the way” (2 Thess 2:7). Wallace also mentions Luke 2:18, another present articular participle: “And all those who heard [hoi akousantes] it marveled…” Obviously that does not refer to continuous action.

Wallace might have mentioned Mark 6:14, “And he said, ‘John the Baptist [Ioannes ho baptizōn] has risen from the dead.’” That is a present articular participle. Obviously, John was not continuously baptizing people since he was dead. We still call him John the baptizing one nearly 2,000 years after his last baptism.

John 4:13 proves that continuous drinking is not in view.

John 4:15 proves that John 4:14 does not refer to continuous drinking.

In John 4:15 the woman said, “Sir, give me this water, that I may not thirst, nor come here to draw.” Clearly, she understands Jesus to be saying that one drink of His living water would mean, 1) she would never thirst again, and 2) she would never need to draw regular water again.

So, if what Wallace is saying is true, a person is not born again unless he continues in faith until death.

This leads to tough questions. How can you have assurance before death that you are born again if a lifetime of continuous faith is required? What happens if a believer were to go through a time of doubt? Since he is not drinking then, is he unregenerate in Wallace’s understanding? What about someone who has a mental condition that causes him to stop drinking, like paranoid schizophrenia, OCD, or Alzheimer’s? Does God give people with mental illness a pass on the continuous drinking requirement?