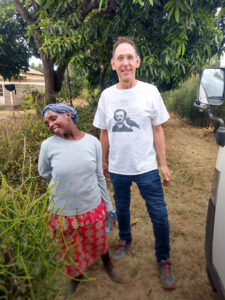 “My name is Irene.” Those were the first words she spoke to me. I was in Kenya and had just completed a very long Bible study on the parables of the Lord. The study was conducted in a very humble church in the countryside. It was made of crude sheet metal, with no windows, no running water, and had a dirt floor. Old timers will understand when I say there was an outhouse about 30 yards from the church.

There were about 90 in attendance, and all of them had been exposed to free grace teaching. They had heard the gospel of grace and were now interested in learning more about rewards. These were dedicated and new believers, some of whom had traveled for hours to be there.

After the study, my Kenyan host asked me to get into the van to rest a minute before we went to the next location to teach. As I sat in the van, I heard my host, who was standing outside, say that someone wanted to meet me and take a picture with the teacher from the United States. I got out of the van to meet that person.

I had not noticed her in the church building. It had been packed with people, and I am sure she sat in the back. The lighting was bad in there, and I am beginning to develop cataracts. But it was impossible not to notice her as she walked towards the van. She obviously had severe physical disabilities. I am pretty sure she had cerebral palsy, but I think there were other things involved in her condition as well. With every step she took, her feet protruded out in strange angles. Her body would move in jerky motions every time she took a step. Her head would turn in odd directions, looking off in different places. The ground was uneven, with no pavement. There were rocks on the ground as well. I thought she would fall every time she took a step towards me.

After she introduced herself, I told her my name is Ken. We then had a short conversation.

PLEASE DON’T FEEL SORRY FOR ME

Other than her name, the first thing Irene told me was that she “had not always been like this.” She said it in a matter-of-fact way, as if she were telling me she was going to the grocery store. It was of some importance to her for me to know that there was a time in her life when she did not have her physical limitations.

I don’t know the reason for her wanting me to know that fact. Perhaps she was being apologetic because, even though she was easily understood, her disease caused some of her words to sound strange. Maybe she was telling me she was sorry I might have some difficulty understanding her, and she wanted me to know that hadn’t always been the case.

I got the impression that she thought it would make me a little less uncomfortable if I knew that she had not been born with her condition. I would guess that she was around 16 years old. Maybe, in her mind, if I realized that for at least part of her life she did not have the difficulties she had now I would be a little less likely to feel sorry for her. It was clear she did not feel sorry for herself. She wasn’t looking for sympathy. The whole time we talked, she had a large grin on her face, even as her face would occasionally jerk off to the side as we continued our conversation.

Whatever reason she brought it up, I didn’t know how to respond to that statement. I quickly changed the subject. I asked her how she enjoyed the discussion on the parables of the Lord. She was much too polite to say anything negative about the study to the guy who had led it, so it was no surprise that she said she really enjoyed learning more about the teachings of Christ. We had a very brief discussion about those parables. She seemed genuinely happy that she had just sat through four hours of teaching on the Bible in a very humble setting. I am pretty sure that sitting that long would have caused her discomfort, but she didn’t even come close to complaining about it.

Another attendee approached us while we were talking. He asked her about her education for the year coming up. She said that she could “not find a place to live.” In her country, a person her age would go off to boarding school. The students stay at school during the week and come home on the weekend. What she was saying is that no school would take her as a student because they couldn’t cope with her many disabilities. They couldn’t meet her needs. While someone from our culture might not have understood, what she was saying is that her future educational opportunities were non-existent.

Once again, she said it in such a way that did not reflect the tragedy of her statement. She may as well have said she thought it might rain tomorrow. There wasn’t even a trace of disappointment in her voice. It seems that she didn’t want the person who asked the question to comment how sad it was that she would miss out on such an important phase of her life.

Irene then asked me if I wanted to come to her house and meet her grandmother. I assumed that is the woman who is her primary caregiver. I didn’t know if her grandmother would want a strange American visiting unannounced. But it didn’t matter. The van was getting ready to leave, and I had to go with it. I told Irene I would love to meet her grandmother, but my Kenyan host was telling me I had to leave. I then told her that if I came back to Kenya, I hoped to see her again, and if I did return, I would meet her grandmother then. She seemed pleased with that possibility.

She started walking down a dirt path towards her home. I watched her walk away, and once again I thought that with each step she took, I would find myself running to lift her up from the ground. I kept an eye on her until the van pulled away. Even though I don’t know how she did it, she kept upright the whole time.

If I would characterize our conversation, I would say it was a happy one. Irene did not emit any emotions of pity at all. But as I thought about our encounter the rest of the day, it sure raised certain emotions in me.

I think the first feeling I had as I drove away was a good one. How I wished the Lord had been at that church that day. Obviously, His teachings on His own parables would have been infinitely better! But more than that, unlike me, He would have noticed Irene sitting in the back of the room. With His word, He would have made her whole. He had done it before when teaching people about the kingdom of God (Mark 1:21-27; 2:1-12).

But I have to admit I had some bad feelings that day as well. I am pretty sure hatred would qualify as such a feeling. When I read about how the religious leaders in Jesus’ day were angry when Jesus healed people like Irene on the Sabbath day, I at the very least bordered on having feelings of hatred toward them (Matt 12:9-14; Luke 13:10-17). I wondered how they could be so cruel.

If hatred towards myself would qualify as a bad feeling, I was guilty of that as well. Looking at Irene’s attitude and her circumstances in life, I realized how ungrateful I am. I have been given so much, and I could not comprehend how difficult just one day of her life must be. I reflected on the fact that the vast majority of the things I complain about are nothing, especially in light of what she faces. We are told in the Scriptures that angels observe what believers do (1 Cor 11:10; 1 Pet 1:12; Heb 1:14). I don’t know what that looks like, but after meeting somebody like Irene, I can imagine a scenario. When an angel hears me complain about so many insignificant things in my life, he must turn to a fellow angel and say, “I sure wish he would shut up.”

I must admit, however, that I ended on a high note. My strongest emotion was a good one. I understood that meeting Irene was a gift from God. Everything led me to believe that she had believed the message of eternal life. She will be in the kingdom of God. My guess is that this is the main reason why she had such a great attitude.

The parables we studied that day taught about Christ’s coming kingdom. Surely, Irene makes all of us more eager to say, “Lord, please come quickly.” Isaiah the prophet looked forward to that day. On that day, the lame will “leap like a deer.” The blind will see. The deaf will hear. The tongues of those who could not speak will sing (Isa 35:5-6). Irene will walk straight, and the Lord will certainly give her a very nice “place to live” (John 14:2).

I know that when we believers get to the kingdom, we will look up our close friends and family members who are there. I only met Irene for a few minutes. But I am certain that on that occasion, I am going to visit where she lives. What a glorious demonstration she will be of what the Lord has done for all of us who have believed in Him for eternal life.

Ken Yates is a retired Army chaplain (Lt. Col). He has many theological degrees, including a Ph.D. from D.T.S. in New Testament. He leads the GES international ministry, cohosts the daily podcast, and assists Bob in all aspects of the GES ministry. His new book, Elisabeth, comes out soon. He and his wife, Pam, live in Columbia, SC.