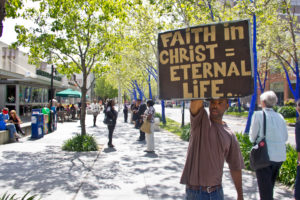 I was told if I did not get to the invitation prayer in the Four Spiritual Laws, then I could not count a conversation as evangelistic. There were lots of people that I shared the promise of
life with, and yet because they left or stopped the conversation before the prayer, I did not report those conversations.

No invitation, no evangelism.

Decades later, long after I graduated from Dallas Theological Seminary (DTS), I recall hearing a fellow DTS graduate, a guy who never was on staff with CCC, who said in a sermon that he gave an invitation whenever he preaches to or speaks with unbelievers, because if he did not, then he had not evangelized. He said that all evangelism must include an invitation. He never told us the prayer that he asked people to pray. But he did say that his invitation included asking people to pray a prayer.

While I was on staff with CCC, I did not question that thinking. I never even thought about how Jesus and the Apostles evangelized.

But when I got to DTS, I began to study the issue and think about how the Lord and His apostles evangelized.

There are many evangelistic messages in Acts too (e.g., Acts 8:4-13, 30-36; 10:34-44; 13:16-41, 44-47; 16:30-31ff.; compare Acts 15:7-11) The Apostles never gave an invitation either. Not once. No salvation prayer was ever mentioned in the NT. No opportunity to confess, commit, pray, or anything of the kind was ever given. Not even an invitation to believe in Christ! Instead, the Apostles, like the Lord, preached that whoever believes in Jesus has everlasting life (or is justified before God). No invitations.

The idea that you must give an invitation in order to evangelize is widespread. I have a collection of evangelistic tracks. I think I have over 100. In well over 90% of them, there is a sinner’s prayer, a salvation prayer, a prayer of commitment for salvation, and so forth. Almost all have invitations.

Of course, in many denominations they have invitations which are called altar calls. Charles Finney, Billy Sunday, Billy Graham, and others popularized altar calls and the sawdust trail. “Come on down, the buses will wait. Come forward so that you can be saved.”

That is man-made evangelism.

I think the opposite is true. If you offer an invitation, then you have not evangelized, at least not clearly, not in the way our Lord and His Apostles did.

Let’s do what Jesus did. Don’t you think that makes sense?