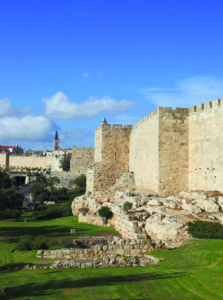 Most people in Christendom believe there will be a final judgment at which each person will be judged by their works to determine if they will be a part of God’s eternal kingdom. Some think true believers automatically perform good works and these works prove they are believers. Others believe that the good works done actually earn eternal salvation.

Who Will Be Rewarded?

It has been my experience that one reaction that some people have when exposed to the doctrine of eternal rewards is that they believe that only well-known Christians, or those who are involved in full-time Christian ministry, will receive great rewards on that day. Christians who are laypeople, or who are not involved in any public ministry, will not fare as well. There often develops an attitude that what some Christians do does not carry as much significance as what others do.

Of course there is ample teaching in the NT that contradicts such thinking. The Lord does not judge as we do. Jesus said that on that day many who are first will be last and many that are last will be first (Matt 20:16). One only has to look at the praise the Lord gave to the unassuming widow in Mark 12:43-44 to realize His approval is not only reserved for those involved in public or more “prestigious” service.

Great significance is attached to the Christian life lived in obedience to the Lord. Even if that life is lived “under the radar.” An OT illustration of this truth is found in Haggai 2.

The people to whom Haggai prophesied had recently returned from their captivity in Babylon. They were a small, insignificant group of people in the Persian Empire. Their neighbors were their enemies (Ezra 4:1-5). They were poor. Their recent crops produced little (Hag 1:6).

One reason they were experiencing some of their difficulties was because they had disobeyed God. He had told them to rebuild their temple, which had been destroyed by the Babylonians. However, they had only built the foundation and then stopped the rebuilding project in order to build their own houses (Hag 1:4, 9).

Through Haggai, God told the people that He would be pleased and glorified if they rebuilt His house (Hag 1:8). From a human perspective, it is easy to understand why the people did not put a high priority on building the temple. They were going through difficult times and were more interested in building their own homes (Hag 1:4). They wanted to devote their time and resources to those endeavors. Haggai’s sermon, however, did its work. They were convicted and made the decision to complete the work on God’s House (Hag 1:14).

In those discouraging times, God encouraged the people in their work. While addressing the political and religious leaders, as well as the people themselves, three times God told them to have courage in completing their work for Him. He reminded them that He and His Spirit were with them and they should not fear (Hag 2:4-5). 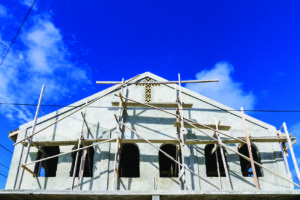 When Solomon’s Temple was built, the Jews had an abundance of gold and fine material (1 Kgs 6:18ff). In addition, when Solomon dedicated the Temple, the glory of the Lord filled the House in the form of a cloud. Even the priests could not enter the Temple because of the presence of God’s glory (1 Kgs 8:10-11).

The builders of this new temple did not have such resources. It would be small in comparison. There was no cloud of God’s glory or presence to fill this temple when it was completed. The Jews did not even have the Ark of the Covenant to place in the temple.

The elderly men and women reminded the younger workers of these facts. It would have been easy for these workers to wonder if there was any importance to their work. The tendency would have been to ask, “What is the use?” How much significance did their obedience to the Lord have?

For this reason, the Lord told the people to be encouraged. He reminded them that He was with them. His Spirit was with them. But He gave them other encouragements as well.

In Hag 2:8, He reminded the builders that the silver and gold belonged to Him. The point here is that they should not compare their service to Him with those who built Solomon’s Temple. If God wanted them to have an abundance of gold, silver, and cedar, He could certainly provide it. If God judged their obedience based upon the amount of wealth that was involved in the work, He would have given it to them.

This encouragement is straightforward enough. However, the Lord also encouraged these builders in a way that is somewhat cryptic.

The Lord tells the people that He will fill the house they are building with glory and that this glory will be greater than the glory of Solomon’s Temple (Hag 2:7, 9). What an amazing promise! But what does it mean?

There appears to be three possibilities. One is that the Lord is referring to the temple in the Millennial Kingdom. It will be larger and more glorious than Solomon’s Temple. This seems unlikely, however. The temple these men were building would be destroyed in AD 70. They were not building the temple that will exist in the Millennium.

The second option is that the temple these men were building would be more glorious than Solomon’s Temple because at a later time Herod the Great would expand it. Herod turned this temple into a building that was full of beauty and larger than Solomon’s (Luke 21:5). This seems unlikely as well. The fact that this temple would one day be larger and have beautiful adornments still would not compare to the cloud of God’s presence that filled Solomon’s Temple.

It seems that the best solution is a third option. One day, Jesus, the Son of God, would enter, teach in, and heal diseases in this temple. John says that the Apostles saw His glory (John 1:14). This would be the temple that would witness the glory of God in His Son. This glory would exceed the glory seen in the cloud of God’s presence. As the author of Hebrews says, in the OT God manifested Himself in many different ways, but Christ is the radiance of His glory and the exact representation of His nature (Heb 1:1-3).

But there is more. The Lord also told these men that in the temple they were building He would one day give peace (Hag 1:9). The first coming of our Lord, culminating in His death and resurrection, would result in peace to all who believe in Him for eternal life (Rom 5:1). The unbeliever is at enmity with God, but with faith in Christ comes peace with God.

Just imagine if the workers of the temple in Haggai’s day would have taken these words of the Lord and believed them. What significance this would have given to their work! If they had known that they were building the temple in which God Himself would minister, a ministry that would offer peace to every man and woman, what a difference it would have made in their attitudes and work. At the time they had no idea of these truths. They were called upon to believe in the words of the Lord and do the work He had given them.

The Value of Our Work

But isn’t all of this an illustration of Christian work? Every believer is given a spiritual gift. These gifts are to be used to build up the Church, the temple of God (1 Cor 3:16-17). We are all called to serve the Lord, but in different ways. A few have public and, it seems, more “prestigious” ministries. Most, however, serve the Lord with little fanfare. These include laymen and mothers who are called to be faithful in what God has called them to do, even if the work seems insignificant by the world’s standards.

But, like the men in Haggai’s day, we are called to work for the Lord. Work done for Him has eternal significance. Work done in obedience to His word brings glory to Him. Like the workers in Haggai’s day, we are called to believe these things. It will only be at a future day, at the Judgment Seat of Christ, when we will see the worth of such labor.

Our encouragement, however, is not just the eternal worth of our labor. Like the workers in Haggai’s day, the Lord and His Spirit are with us. The believer today has a greater experience of God’s presence than they did. His Spirit permanently indwells us (Rom 8:9). His Spirit is the One who empowers us to do what God calls us to do.

His Work, Our Hands

We live in a world, it seems, that is growing more openly hostile to Christian truths. It is a world that distorts the gospel. At times, it may seem that what we do has little impact or value. However, all we need to do is look at the men building the temple in Haggai’s day. Like them, we are to gain encouragement in the truth that God is with us. We are doing His work. Such work glorifies Him. Only in the future will we see the eternal worth of our labor. In His strength, let’s get to work, and keep on working until Jesus comes.