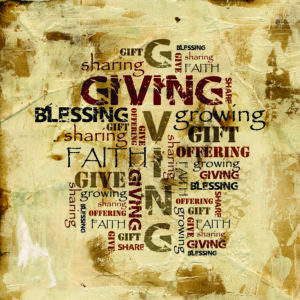 Free Grace theology emphasizes that eternal salvation rests upon the grace of God. We receive eternal life as a free gift through faith alone in the Lord Jesus Christ, apart from our works, the moment we believe in Him for that life.

But that raises a challenge. If we are to correctly proclaim God’s grace, we need to clarify how grace and works are related in the believer’s life. Some would say that anyone saved by grace will automatically be characterized by a lifestyle of good works, and that if a radically transformed life is not evident, that proves they were never saved to begin with.

Is that true? Do all believers automatically experience radical transformation that shows itself in a lifetime overflowing with an abundance of good works?

2 Corinthians 8-9 contains the longest discussion in Scripture of one particular example of Christian good works, namely, the issue of Christian giving. Specifically, Paul asked the believers in Corinth to give financially in order to help the poor believers in Judea.

If the first century Church was anything like the Church today, the subject of giving must have been a touchy one. There is a natural inclination to hold on to one’s money. What made this particular situation even more sensitive was that Paul had enemies at Corinth who might accuse him of false motives in asking for money (cf. 2 Cor 12:11-13; 13:3). Moreover, Paul was asking a mostly Gentile church to give to a Jewish church. This would involve both cultural and racial considerations.

It is interesting how Paul dealt with such a potentially difficult situation. What was the basis of his appeal? The answer is simple: the grace of God.

Even though these two chapters are about Christian works, they strongly emphasize grace. The word for “grace” (charis) occurs ten times (8:1, 4, 6, 7, 9, 16, 19; 9:8, 14, 15). Paul began his discussion with God’s grace (8:1), saying that God gave grace to other churches, specifically those in Macedonia, by giving them the opportunity to give to the needy believers in Judea.

And Paul’s discussion also ends with the theme of God’s grace. When the Corinthians give, God’s grace will be evident as working in them as well (9:14). Paul then says that he gives thanks (charis) to God for this gift (9:15). While the “gift” (dōrea) here could possibly refer to eternal salvation, the context suggests that it refers to the gift of having the opportunity to minister to the needs of other believers.

God’s grace, then, forms an inclusio— like the bread of a sandwich—around this discussion about Christian giving. It is God’s grace that allows us to do good works by serving others, and His grace that gives us the privilege of doing so.

Being Aware of God’s Grace to Us

In 2 Corinthians 8:9, Paul reminded the Corinthians that they were aware of the grace of Jesus Christ. Although He was rich, He became poor that they might become rich (2 Cor 8:9). This is a beautiful picture of what Jesus did for us. When we were in need, He left His divine throne and humbled Himself to become a man. He died the death of a criminal, taking upon Himself the sins of the world. He did all this that through faith we might receive eternal life.

In other words, He met our need and served us when we were “poor.” Paul is making the point that when Christians serve the needy, they are being like Christ. Christ’s life provides us with the example of grace in action. It should motivate us to minister to others, just as He ministered to us.

Even though Paul was specifically talking about the work of giving financially to others, his point applies to any good work we do. When a believer ministers to others through his or her spiritual gift, God gives us the grace to do it. The privilege of serving others is itself an example of God’s grace.

Good Works Are Not Automatic

The NT teaches that all Christian service is a giving of oneself to others. One need only think about the teaching of the Lord in Mark 10:43-45. Like Paul’s discussion in 2 Corinthians 8-9, the Lord told the disciples that when they serve others they are being like Him. Greatness in Christian service is serving others.

But it is also clear from Paul’s discussion that such works do not come automatically for the believer. In this passage Paul uses the example of the Macedonians (8:1-5) to urge the Corinthians to do the same. We learn here that believers can, by their actions, provide an example for others to follow.

But it was also possible for the Corinthians not to follow the example of the Macedonians. Paul told them that they had the option to give, and that it was not a command (8:8). He also acknowledged that the Corinthians may fail to do well in this gracious work. Their giving might be stingy and a source of embarrassment (9:3-5).

The same is true for any Christian good work. Good works are possible, not automatic. The believer has the power to refuse to act upon the grace of God. We can refuse the privilege of serving others and being like Christ.

But whether believers accept or reject the opportunity to serve others, they reap the consequences of their actions. There is a spiritual law of sowing and reaping. Paul told the Corinthians that giving is a case in point. They would reap based upon what they sowed (9:6, 10). However, the potential harvest was not static. God could multiply the impact of their giving. Paul prayed (as they should as well) that God would do that: “Now may He who supplies seed to the sower, and bread for food, supply and multiply the seed you have sown and increase the fruits of your righteousness” (9:10). In the context, the things they would reap included thanksgiving and glory to God (9:8-13). The harvest, then, includes reaping things pertaining to this life.

However, the NT is also clear that Christian service will also result in a reaping in the next life, at the Judgment Seat of Christ. On that day, believers will be rewarded for how they have served the Lord and others. One of the major contributions of Free Grace theology is distinguishing between eternal salvation and eternal rewards. The former is free. The latter requires work. And both are only possible by the grace of God.

2 Corinthians 8–9 teaches us a great deal about good works. By using the example of giving, Paul shows us that the privilege of obedience to Christ and serving others are examples of God’s grace in our lives. We can be motivated to do good works by observing others or even being an example for others to emulate. In our obedience and service we are following Christ’s example. When we respond to God’s grace by serving, we are displaying the grace that He demonstrated to us in providing for our eternal salvation. Such obedience also results in a harvest of rewards both here and in eternity.

This passage also teaches us that both our induction into the Christian life and our service are a result of God’s grace. However, we must always keep the two distinct. The believer has received eternal life by grace through faith. He or she can never lose that life. Eternal salvation is just that—eternal.

However, we can spurn the grace that God continually gives us to serve Him and others. Or we can gladly respond to His grace and use our time, talent, and treasure to minister to others in His name. But make no mistake, there are consequences. What we sow we reap. God is gracious in giving us the opportunities to serve Him and others. But will we act in a Christ-like manner and grasp those opportunities? Doing so is not automatic. We must be intentional in our actions.

One of my favorite hymns is He Giveth More Grace by Annie Johnson Flint. It speaks of God’s great limitless love, power, and grace. Even though the hymn specifically addresses how God gives His children grace when they experience affliction, the words of the chorus also apply to the grace God gives us to serve Him. It summarizes what Paul teaches about Christian works in 2 Corinthians 8-9:

His love has no limit;

His grace has no measure.

His pow’r has no boundary known unto men;

For out of His infinite riches in Jesus,