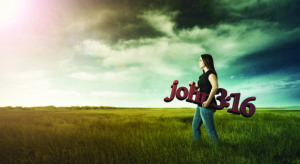 In a recent blog, I indicated that there are over 100 passages in the Bible which say that the one and only condition of everlasting life is believing in Jesus. That led to an email from one of our blog readers:

I have known that for a long time, but it would be a nice tool if we had a list of where all those places are in the Bible. As you well know, for most people, that has to be an incredible statement, like “I’ll believe it when I see it.” I am wondering if you could put out there on a blog those 100 passages.

Well, I happen to have such a list. But before I give it, let me give some explanation.

Lewis Sperry Chafer famously said there are over 150 verses in the NT that clearly say that everlasting life (or justification) is solely based upon a person’s belief or faith in Jesus Christ (Systematic Theology, Volume 3, Soteriology, p. 376).

There is even one verse, Gal 2:16, which three times in the same verse says that justification is by faith and not by works. Is that one or three references? I counted it as one.

I have taken a sort of middle of the road approach to such passages, counting them as more than one in many cases, but often less than the number of verses involved.

If we are looking for texts that explicitly say that the one who believes in Jesus has everlasting life (or is saved or is justified), the number is around seventy-four.

If we include fifty-five texts which implicitly say that (for example, saying that someone is born again by the Word of God, but not specifically mentioning faith in Christ), the number rises to 129.

Note that in some of the seventy-four definite verses, faith is not specifically indicated as faith in Christ. Ephesians 2:8-9 is a famous example: “For by grace you have been saved [made alive, v 5] through faith…” Since in such cases it is clear based on the context that the author means faith in Christ, I have included these.

Matthew and Mark have no verses which explicitly teach faith alone.

Luke has one explicit verse on faith alone: 8:12, “The devil comes and takes away the word out of their hearts, lest they should believe and be saved.”

First Corinthians has only one clear verse: 1:21, “to save those who believe.”

Philippians has one clear text on faith alone: 3:9 (“the righteousness which is from God by faith”).

First Thessalonians has one: 5:10 (“whether we watch or sleep, we should live together with Him”).

First Timothy has one: 1:16, “I [am]…a pattern to those who are going to believe on Him for everlasting life.”

Second Timothy has two clear texts: 1:12 (Paul knows he will be with the Lord and will be rewarded by Him for the work he has done); 3:15.

If we were to be very narrow in our list, the number would be around sixty-nine.

Matthew, Mark, and Luke have six implicit faith alone messages. In all six places the Lord Jesus, after healing someone, says, “your faith has saved you.” Those verses are Matt 9:22; Mark 5:34; 10:52; Luke 8:48; 17:19; 18:42. The Lord might have simply been referring to physical healing. However, it is quite possible that He was referring to both physical healing and eternal salvation.

Second Corinthians has one: 4:4.

First Timothy has one implicit verse: 4:10

And Revelation has one implicit text: 22:17.

If you have time, work your way through both lists. You might not agree on each and every one of the verses I listed there. You may have many more you put on your own list. But the point is clear. There are a lot of verses in the Bible which make it crystal clear that justification/regeneration/eternal salvation is gained simply by believing in the Lord Jesus Christ. No works required. He took away the sin of the world at Calvary (John 1:29). All that we need to do is believe in Him in order to have the life which He promises to the believer, ever-lasting life. 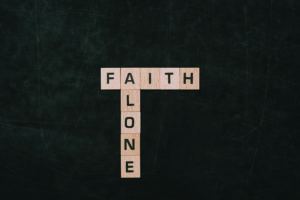 Why Is There Resistance to This?

The puzzling question, in light of the evidence cited above, is why anyone in Christianity would deny that justification is by faith alone, apart from works? And why would anyone who calls himself a Christian say that we are justified by faith alone, but then define true faith as including repentance, commitment, and obedience?

The faith alone message is hard to believe. That is the bottom line. And many if not most people in Christianity are unwilling to believe it.

I personally was opposed to this message and unwilling to believe it until one day before my senior year in college a friend, John Carlson, asked me if my view of the gospel might be wrong. That hit me hard. At that moment I became willing to consider whether I was wrong. I told the Lord that. But I also told Him that I had to be convinced by the Bible. After five one-hour sessions debating the faith-alone message with a Cru staff member, Warren Wilke, I came to faith in Christ for everlasting life. I knew I had everlasting life by faith alone and that I could never lose it. What a day of rejoicing that was.

In His ministry in Israel, Jesus repeatedly confronted this very situation of legalists unwilling to believe. Here is one of my favorite texts on that issue, one of the definite verses listed above, John 5:39-40. The Lord said, “You search the Scriptures, for in them you think you have eternal life; and these are they which testify of Me. But you are not willing to come to Me that you may have life.”

Do you believe? That is, are you convinced that all who simply believe in Jesus for everlasting life have that life?

If not, are you willing to believe that?

Is it possible your view of the gospel is wrong?

I am so thankful for the witness of John Carlson and Warren Wilke. They convinced me that the faith-alone message is correct. You might say that I’m eternally grateful.