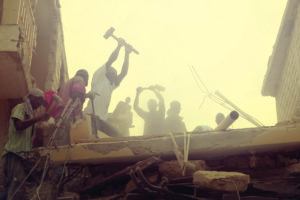 In a famous verse in 2 Timothy, Paul writes that “All scripture is given by inspiration of God, and is profitable for doctrine, for reproof, for correction, for instruction in righteousness” (2 Tim 3:16).

Paul says here that all Scripture is useful for us. This would certainly include the OT.

In referring to the OT, Paul also tells the church at Corinth that what happened to the Jews in the wilderness was written for us, that is, the Church. These things are an example from which we can learn (1 Cor 10:6, 11).

When the NT explains how things in the OT apply to us as examples, it is easy to see and understand.

For example, in the passage in 1 Corinthians, Paul says that the attitude and actions of the Exodus generation in the book of Exodus teach us that we should not live immorally and in rebellion against God. If we do, we will experience negative consequences, just like they did.

In a positive example, James presents us with Elijah. In this OT prophet we learn that the prayers of a believer in fellowship with God can accomplish much (Jas 5:16-18).

When the NT gives us divine interpretations of these events in the past, we can comprehend how these things are useful for us. But what about when we do not have a NT explanation of how a particular passage applies to us today? Admittedly, this is much more difficult. However, we can still look at such OT passages and see that they provide examples for us to learn from.

One such passage is Nehemiah 3. Not only is this passage not discussed in the NT, Nehemiah is one of the few books in the OT that is not mentioned at all. But it is my contention that it is useful for us as believers today, just as Paul says to Timothy. To understand how, we must look at the historical background of the book.

Nehemiah was one of the leaders of the Jews who returned to their homeland after their captivity in Babylon. Because of the sins of their fathers in disobeying God, they had been conquered by the most powerful nation on earth and become their slaves. Their capital city, including the Temple of God, had been destroyed.

After the Jews had lived 70 years as captives in Babylon, the Persians had defeated the Babylonians and allowed the Jews to return to their land. It was a difficult return. Many Jews decided to remain in Babylon, which for most was the only home they had ever known. Those that returned were a poor group of people. They returned to a desolate land and a destroyed capital city.

We are told that at times their crops were poor. In addition, enemies such as the Samaritans and the Arabs tried to thwart their attempts at rebuilding their land. To make matters even worse, we are told in the book of Ezra that many of the Jews who returned to the land followed in the same example of disobedience as their fathers. They had married foreign women in the land, which was a direct violation of God’s commands. There was the fear that God would judge them as He had done their ancestors.

It is with this background that Nehemiah arrived on the scene. He was given the task of rebuilding the wall that surrounded Jerusalem. This wall was very important because it provided safety for the inhabitants of the land. If their enemies decided to attack them, the city would provide a safe haven within the wall. It was Nehemiah’s responsibility to motivate the Jews in this undertaking.

It is interesting to note that Nehemiah did not come to Jerusalem to accomplish this work until about ninety years after the Jews had returned to the land. No doubt, the Jews had other more pressing needs than building the wall. They had their own homes to build and they had crops to plant. The idea of building a two-mile wall around the city took a low priority. And, as mentioned above, this was a discouraged group of people.

This discouragement is seen in the book of Nehemiah. In chapter 4, Nehemiah records the scorn of the enemies of the Jews as they began building the wall. Both the Samaritans and Arabs mocked their work. They referred to the Jews as a weak group of people. They only had burned stones with which to build the walls. These were the stones that remained from the destruction many years earlier when the city was burned by the Babylonians. Such stones were of a weaker quality and would not make for a sturdy wall. In fact, one Arab taunted them by saying that if they built the wall and a small animal were to climb on it, the whole thing would fall down (Neh 4:1-3).

What Was Their Motivation?

But in the midst of all their discouragement, the Jews built the wall. The first question that must be asked is, “What motivated them to do so?”

To be sure, they were concerned about their safety, and the wall would provide a measure of that. But there was more.

Before and during the captivity in Babylon the Jewish prophets had told the people that God would bring them back to the land. In addition, God said that the Messiah, their King, would come to Jerusalem, the very city they were rebuilding!

In fact, the prophet Daniel said that the rebuilding of the city would start the clock running on the time the Messiah would come (Dan 9:25).

By building that wall, they were doing the work of God and believing in what He had said.

Even in the midst of discouragement and surrounded by enemies, they were demonstrating that God would fulfill His promises to the nation.

An Example for Us

In this context, we can see how these people are an example for us. We see this in the building of the wall in Nehemiah 3.

One of the things we see is that the Jews who built the wall, and who were engaged in this work, did it together. Each one was assigned a portion of the wall to build and over and over again in the chapter it says that each person worked “next” to the one previously mentioned.

The work of God is not something we do as individuals, but as part of a group. For believers today that is the Church.

We also see that all kinds of people were involved in the work. In Neh 3:1 we are told that the high priests and his fellow priests built part of the wall. As leaders they had a responsibility to be engaged in and encourage others in this endeavor.

But those with less stature in the community were also involved. In v 26 we are told that the Nethinims worked side by side with the priests. The Nethinims were those men assigned menial tasks within the Temple. In addition, v 12 says that women also took part in the work. People from all walks of life worked together to accomplish what God desired.

Even though the nation had its enemies surrounding them, some of the workers had additional opposition.

Verse 5 relates how the men of one city came to work on the wall. They came from the town of Tekoa, which was about 12 miles south of Jerusalem. However, Nehemiah relates how the leaders of that town were not willing to help. Perhaps these leaders felt the men were needed at home or perhaps they felt more exposed to the enemies of Israel and did not want to provoke them further.

In any case, these men obeyed the Lord even though they faced opposition in their own community.

A Man on Fire

The highlight of the chapter, in my opinion, is found in v 20.

A man by the name of Baruch worked on his section of the wall. It says that he did his work “earnestly.”

The basic meaning of this word is that of “fire.” He had a burning zealousness about his work. He did it diligently. Here was a man that was doing the work of the Lord, preparing for the coming King. And did his work with gusto. He did this even in the midst of the discouragement that was all around him.

I do not think we are going out on a limb when we conclude that these Jews in Nehemiah 3 are an example for us.

As believers in Jesus Christ we are part of a group doing the work of the Lord.

As the Church, the Body of Christ, we are to be about doing what He has commanded us.

We are preparing for the day when the King comes again.

Within the Church with our spiritual gifts, and outside the Church in evangelism, we are preparing for that day. We work side by side, and there is nobody who can say that what they do is unimportant.

Just like the Jews in Nehemiah, there are plenty of things that can discourage us. These things can come from the world or even from people close to us.

But may we not simply be those who work for the Lord. May we all be like Baruch and do what we are doing for the Lord with a burning zealousness, with diligence, regardless of the circumstances we find ourselves in.

Perhaps it is no coincidence that Baruch’s name means “blessed.” When we stand before the Lord to give account of the work we did for Him (2 Cor 5:10) in order to determine our rewards in the world to come, how “blessed” will we be if the thing said about Baruch is said about us.