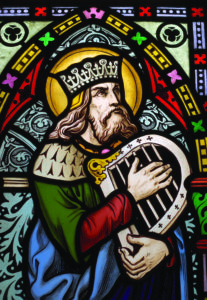 When I study the New Testament, I like to see how it deals with Old Testament quotes. It is always interesting to go back and study the original context. For example, take Heb 10:5-7:

Therefore, when He came into the world, He said: “Sacrifice and offering You did not desire, But a body You have prepared for Me. In burnt offerings and sacrifices for sin You had no pleasure. Then I said, ‘Behold, I have come—In the volume of the book it is written of Me—To do Your will, O God.’”

Christ’s Death, Not Animal Sacrifices, Was Needed to Take Away Sins

In this passage, the author of Hebrews tells us that the Old Testament sacrificial system could never take away the sins of God’s people. It is impossible for the blood of bulls and goats to do that (Heb 10:4).

Then, the author tells us that Christ took on a human body in order to make that sacrifice (Heb 10:5-7). What the blood of animals could never do, the blood of the eternal Son of God could. His death paid for the sins of His people forever. Because Christ made this sacrifice, believers have been made holy forever (Heb 10:10, 14).

When the author refers to Jesus taking on a human body, he quotes from Ps 40:6-8. This Psalm is traditionally ascribed to David.

But what was David talking about when he wrote these words nearly ten centuries before the time of Christ?

David Remembers His Own Divine Deliverance

In the first part of the Psalm we see that David is referring to something that happened to him in the past. God had delivered him from some kind of problem. Perhaps it was a serious illness or from some kind of enemy. David describes it as a “horrible pit” in which his feet were sunk in miry clay (Ps 40:2). When David was confronted with the problem, he trusted in the Lord to deliver him. He cried out to God, Who heard and delivered him (Ps 40:1).

David responds to God’s deliverance by singing a new song (40:3). One is reminded of the song of deliverance the children of Israel sang when God delivered them from Egypt and through the Red Sea, while at the same time destroying their enemies who pursued them (Exodus 15).

David tells everyone about his deliverance and about God’s faithfulness, power, and lovingkindness (Ps 40:9-10).

When David tells others of these things, he also tells them they can trust in God too. In times of trouble it is easy to trust in our own power or in the power of others. But David wants us to trust in God. David waited on Him. He cried out to Him. And it was God who delivered him (Ps 40:4).

It was only natural that David should trust in God. He knew from experience that the Lord was trustworthy. God had demonstrated His power and ability to deliver many times in the past (Ps 40:5). God delivered the Jewish people. He also delivered David as a young shepherd from the mouths of lions and bears, as well as from Goliath, King Saul, and other enemies.

After declaring how God had delivered him, David writes the verses quoted in Hebrews. Even though they point to Christ, they are also directly relevant to David.

As a result of what God had done for him, David is compelled to obey God. God has opened his ears so that he wants to obey (40:6). It is his delight to do what God requires of him. The law of God is within David’s heart (40:8). This does not mean that David is enjoying the benefits of the New Covenant (where God’s Law is written on the heart of the child of God—Jer 31:33). It means God has captured David’s affections. He does not want to simply obey God through rituals like sacrifices and meal offerings (40:6). It is no longer a matter of simply going through the religious motions for him. David actually wants to obey God.

Of course, all of this also points to Christ and His obedience. We all know how He took on a body in order to pay the penalty for our sins. But from the context of Psalm 40, there is more.

Christ was the perfect example of David’s desire to be completely dedicated and obedient to God. This is shown through the sacrifice He willingly made for the sins of mankind.

Christ, like David, trusted in God to save Him. Like David, He cried out to His Father to deliver Him from death (Heb 5:7). After demonstrating this trust, Jesus, like David, became one who proclaimed to others that such trust was warranted (Heb 2:12-13).

We learn many things from Psalm 40 and its use in Hebrews 10.

First, Christ took on a body and died on Calvary to pay for all of our sins once for all. When a person believes in Jesus Christ for eternal life they receive that gift and are made holy forever. They cannot lose it.

Second, all of this was the result of the obedience of Christ to the Father. Christ’s obedience is a model for us.

Third, Christ has shown that we can trust in God when we need deliverance. God has delivered every believer from the greatest enemies of all—sin and death. The believer can now call upon God to save (i.e., deliver) him in every circumstance, and from whatever issue, he needs deliverance.

Fourth, because God has done that for us, we should also follow Christ’s, and to a lesser degree David’s, example. We, out of grateful hearts, should desire to obey God. We should desire to serve Him not out of some kind of legalistic or ritualistic requirement. The believer has the Law of God written on his heart. God has given us the ability to obey Him through His Spirit. After all He has done for us in Christ, like our Savior, He should have our total affection.