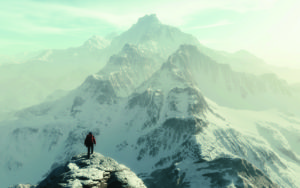 Recently I ran across a quote by a Calvinist. He said that he was sure he was born again and eternally secure “without a doubt.” He went on to say that he was sure he would persevere, going so far as to say that even if he tried to walk in rebellion against Christ, he would be unable to do so because God guarantees to keep him walking with Christ.

Is that correct? Can we be sure that we will persevere in faith and good works?

The Bible makes it clear that we cannot be sure we will persevere. The Apostle Paul was not sure he would (1 Cor 9:27). If he couldn’t be sure, then we can’t be either.

I have debated multiple Calvinists (and one Arminian) who have said that they were not sure they would persevere.

I have only met one person who told me he was sure he would persevere—an Arminian Charismatic, one who believed that everlasting life could be lost. But he told me that God told him personally he would not fall away. God gave him a special promise that he would persevere and keep his salvation.

I remember Dr. James Dobson, an Arminian, talking about his Arminian father who nearly died during a medical emergency. He ended up living another year or so. But Dr. Dobson reported on the radio that God appeared to his father while he was recovering and told him that he would definitely persevere. Dr. Dobson pointed out how comforting it was for his father to know he was secure in his salvation.

I agree, it is comforting to know that we are secure in Christ and cannot lose our salvation. But the good news is that we do not need any other special revelation than that which we already have in the Bible in order to know that we are secure in our salvation. Jesus promised, “He who lives and believes in Me will never die” (John 11:26). I believe in Him. I know I will never die spiritually. Whether I persevere or not, I am saved once and for all. So are you if you believe His promise of life.

Perseverance is commanded in the Bible. But it is not guaranteed. Christians can fail to persevere. However, even if we do fail to persevere, we remain eternally secure (John 11:26; 2 Tim 2:12). What we lose if we do not persevere is God’s blessings in this life and the eternal rewards that we could have received at the Judgment Seat of Christ, including especially His approval and the right to rule with Him in the life to come.

So, can we be sure that we will persevere? No. We can’t. But we can be sure that we have everlasting life that can never be lost. And that assurance can produce in us such a profound sense of gratitude that our walk with Christ will continue as long as we retain our gratitude and our love for our Savior, Lord, and Judge.