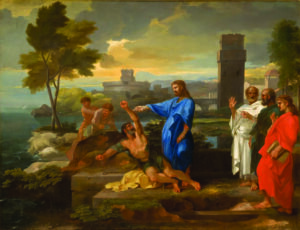 The Scriptures invite both believers and unbelievers to petition God. Matthew 7:7-12 and the Lord’s calls to ask, seek, and knock are prime examples.

Some early manuscripts of Mark 5:1 read Gerasenes, not Gadarenes. English translations like the NASB, NIV, NET, and HCSB, which follow the so-called Critical Text, read “Gerasenes.” However, most manuscripts, the Majority Text, read Gadarenes and should be accepted as original.

The cast of characters includes the demons, the man who was possessed and then delivered, the pigs, the people tending the pigs, and the people of Gadara and the surrounding areas who hear about the miracle. Most of the people in the story are Gentiles, which was rare in Jesus’ ministry.

Three of the characters in the story beg Jesus to do something for them: the demons, the man who was delivered, and the town’s people.

It is surprising what each asks.

It sometimes means to ask in the NT. But in these verses, it means “to make a strong request” (BDAG), that is, to beg, plead, or implore.

Unfortunately, the NKJV and the NIV and most translations do not translate it the same way each time. They translate it as begged in vv 10 and 12 and 18 and to plead in v 17. It should be translated the same each time.

The NASB(95) has the word implore in all four of the verses.

This passage revolves around the word beg. It is good to beg Jesus to do or allow something, but only if we are begging for a good thing.

This miracle occurs after Jesus stilled the storm while He and the disciples were in a boat facing drowning (Mark 4:35-41).

Soon after He gets out of the boat, a demon-possessed man confronts Jesus.

Gadara was both a city and a region south of the Sea of Galilee. The demon-possessed man lived in the rocks and caves in the region.

He was a very dangerous man. No chains could hold him. He was as dangerous as the deadly storm on the Sea of Galilee that the disciples had just survived.

Verse 6 says, “When he saw Jesus from afar, he ran and worshipped Him.”

Worship refers to kneeling before someone. Here the man kneels before Jesus.

This is amazing since “he” refers to the demons within the man! Here are myriad demons worshipping the Lord Jesus. Amazing.

The Demons Worship and Implore Jesus Not to Torment Them (5:7-9)

In v 7, the speaker uses the first person singular: “What have I to do with you, Jesus, Son of the Most High God?”(emphasis added). We are not told how he knew His name was Jesus and that He is the Son of God.

Though a singular pronoun is used in v 7, it soon becomes clear that the speaker is not the demon-possessed man but is instead the spokesman for the thousands of demons who possessed him.

There are several ways in which these demons could have learned Jesus’ name and identity. Even in a predominantly Gentile region, the many demons might have heard reports about Jesus. But since new demons came to possess the man over time, demons who could have been from Capernaum or other cities of Galilee would regularly bring new information. Think of the Borg in Star Trek. The demons within this man were a collective. They shared information. Of course, Satan might have a way of communicating directly with his servants as well.

The demonic spokesman says, “I implore [adjure, urge, strongly request] You by God that You do not torment me.” It is ironic that demons are imploring Jesus by God not to torment them.

The Lord then commands the demon to come out and asks the demon his name. In v 9, the demon clarifies who he is: “My name is Legion; for we are many” (emphasis added).

A Roman legion was 4,000 to 6,000 soldiers. That suggests that there were thousands of demons inside this one man. That accounts for the great strength. He had superhuman strength. 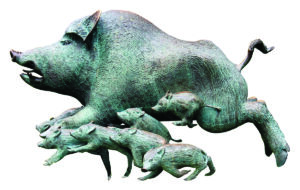 The head demon, the spokesman for the Legion, begs Jesus not to send them outside the country, or region. The demons realize that Jesus, the Son of God, is in control. He could send them to the Abyss. Or he could send them into the wilderness, far from any people. They are begging Him because they are powerless in His presence.

They ask for Jesus to send them into the herd of swine.

Jewish people did not eat pork, and they normally did not raise swine.

Gadara was one of the ten major cities in the Decapolis, a primarily Gentile area. While Jesus was sent to the house of Israel, He did interact with a few Gentiles and Samaritans during His ministry (e.g., a Roman centurion, a Canaanite woman, as well as the woman at the well and other Samaritans at Sychar). This is one example of that. The demon-possessed man was most likely a Gentile, and so were the herdsmen and most of the people of the town and countryside.

Demons are spirits without bodies that live in bodies like hermit crabs live in abandoned shells. This is the only case in the Bible where we learn of demons going into animals.

What Happened Immediately After the Miracle? (5:13-15)

Jesus permitted them to go into the herd, and they entered about 2,000 pigs. Most likely, each pig had one or more demons in it.

The herd basically committed mass suicide. They ran down into the sea and drowned there. Pigs can swim. It seems that the pigs chose to die, rather than be possessed, though we cannot be sure of that. Many commentators think that the demons wanted to kill the pigs. But it seems more likely that the pigs were unwilling to be possessed.

Remember that the disciples had nearly drowned in the sea right before this incident took place. Now they see 2,000 swine drown in the sea. It must have been a very odd sight.

Those who tended the swine went into the city and the countryside and told everyone what had happened.

The result is that people of the city and countryside came out, saw the man “sitting and clothed and in his right mind,” and they were afraid. The man had been uncontrollable before. He had been out of his mind and extremely dangerous. The Gentiles of the region were probably asking the same sort of questions the disciples asked after Jesus stilled the storm, “Who can this be…that even a demon-possessed man obeys Him?” (compare Mark 4:41).

How do you think they should have reacted?

Here was a great miracle. A man who had been wild and insane and dangerous was now no longer a danger, no longer wild, and no longer insane.

Of course, someone lost a lot of money in the 2,000 drowned swine.

But here was a miracle so great that they should have begged Jesus to teach them about God and salvation.

Instead, they beg Jesus to leave: “They began to plead [or to beg] Him to depart from their region” (Mark 5:17).

The consequence was the pathetic request of the inhabitants that Jesus leave them. Their motive may well have been that they were afraid to have in their midst one whose power was as great as that which Jesus had demonstrated (Lane, Mark, p. 187).

Instead of being drawn to Jesus they shrank from him. They were blind to his mercy, they feared only his power. This reaction was wholly abnormal and unreasonable as all the reactions of unbelief are (Mark, p. 214).

The Healed Man Begged Jesus to Let Him Follow (5:18)

Jesus is about to leave with His disciples when the healed man “begged Him that he might be with Him” (v 18). It was a great request. Jesus wanted people to follow Him.

But Jesus wants him to stay and be a witness there.

This is a strange reversal. Normally Jesus wanted people to leave everything and follow Him. But He wanted this man to stay.

The name Decapolis means ten cities. This was a region that had ten main cities.

Jesus and His disciples had been rejected. But Jesus wanted a witness there. He sent the man who had been healed. That man would find many willing to listen.

Of course, the Lord Jesus only told him to “Go home to your friends and tell them what great things the Lord has done for you, and how He has had compassion on you” (Mark 5:19). The man took the initiative to talk to far more than simply his friends or even the people in Gadara. He went on a preaching tour throughout the ten cities and the countryside between. We are not told what he said. Surely, he told of his healing. He probably also told them that Jesus is the Messiah and that all who believe in Him have everlasting life. While Mark does not report that the Lord Jesus led the man to faith in Him, it is inconceivable that the Lord would deny his request to be with Him and would send him out to share his story unless He had first shared the promise of life with him.

Lane writes, “Thus in the midst of the Gentiles, the God of Israel was glorified through the proclamation of what Jesus had accomplished” (Mark, p. 189).

We might call this man Jesus’ first Gentile missionary.

Always remember that our Lord is the one who controls everything, including nature and Satan and his servants. Jesus is in control. He is all powerful. Nothing is outside His control. We can praise God that our Lord is sovereign.

We should tell others what Jesus has done for us.