[Chapter 12 from the forthcoming book: Faith Alone in 100 Verses]

“You search the Scriptures, for in them you think you have eternal life; and these are they which testify of Me. But you are not willing to come to Me that you have life” (John 5:39-40).

The Jewish leaders believed in salvation by law keeping. They searched the Scriptures so that they might make sure they understood all of the commandments and that they knew which were the most important. You will recall that Jesus was asked what the greatest commandments were. This was asked so that the listeners could feel better about themselves.

The Jewish religious teachers thought that “in them [the OT Scriptures] you think you have eternal life.” They did not believe the faith-alone message. They believed that faith in the one true God was necessary. But that alone would not save anyone. They believed that faith in God must be wedded with a life of good works. Sounds familiar? Lots of people in Christianity believe that today. 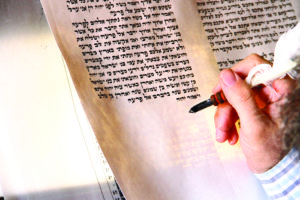 The Old Testament Testifies That Jesus Is the Messiah

The words “and these are they which testify of Me” are meant to draw the audience to faith in Christ. They should have been searching the Scriptures, but not to make sure they were doing enough. They should search the Scriptures to see if what Jesus is saying is true (cf. Acts 17:11).

Though yet future to the time Jesus was speaking, He would soon go the cross and then rise from the dead, both in fulfillment of Scripture.

Being Willing to Come to Jesus for Life

Legalists typically are not open to the faith-alone message. I was raised in a sinless-perfection group. I became an extreme legalist. I was closed to the faith-alone message until a few weeks before the start of my senior year in college. A friend from the group came to faith in Christ and said to me, “Bob, is it possible your view of the gospel is wrong?” That shook me up. I suddenly became willing to believe something different than I’d been taught. I was afraid. But I prayed for God to show me the truth and I went with my friend to a Campus Crusade for Christ meeting and a month later I came to faith.

What an indictment for the Lord to say, “But you are not willing to come to Me that you may have life.” Finally, the long-awaited Messiah was in Israel. And most of Israel was unwilling to believe in Him.

The expression coming to Me in John’s Gospel refers to believing in Him for everlasting life. Compare John 6:35, “He who comes to Me shall never hunger, and he who believes in Me shall never thirst.”

The answer is in the Bible to those who are willing to accept it. The million dollar answer is not which are the two greatest commands in the Bible. To gain everlasting life one needs to believe in the Messiah, Jesus. It is that simple. Faith in Jesus, plus nothing.

If you know a legalist, or if you are one, why not pray about this? Ask God to show them/you if the faith-alone message is true.