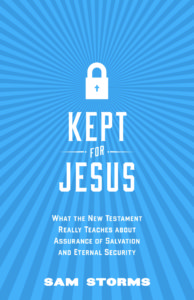 Kept for Jesus: What the New Testament Really Teaches about Assurance of Salvation and Eternal Security. By Sam Storms. Wheaton, IL:Crossway, 2015. 203 pp. Paper, $15.99.

Sam Storms graduated from Dallas Theological Seminary in 1977, the year before I began. While we did not overlap, I have long known of him. He departed from Dispensationalism, adopting Covenant Theology. He also ceased being a Cessationist. However, he has maintained a reputation as a solid Bible teacher.

Preservation of the Saints

This book presents Calvinist teaching on the preservation of the saints (eternal security) and the perseverance of the saints (assurance of salvation). However, the extreme comments often found in Calvinist Lordship Salvation writings are rarely present in this book. I found Storms to be easy to follow. Generally he is irenic in tone.

I don’t recall reading a Lordship Salvation person who suggests that Jas 5:19-20 refers to one believer saving another believer from physical death. That is a typical Free Grace view. But that is Storm’s view (p. 161).

In the same place he also suggests that Ananias and Sapphira in Acts 5 and the believers under God’s discipline in 1 Cor 11:30 were examples of born-again people who died under temporal judgment (p. 161).

Unfortunately, the discussion of Jas 5:19-20; Acts 5; and 1 Cor 11:30 is the exception. Lordship Salvation understandings are the rule.

Repeatedly we find statements which indicate that saving faith includes repentance, believing the gospel, and embracing Jesus as Lord (p. 39; see also p. 25), that to be born again one must trust in and swear allegiance to the Lord Jesus Christ (p. 49), and that one must have a deep commitment to Christ (p. 50), not a “shallow commitment” (p. 115).

In light of how careful Storms is in his language, I was surprised to see a number of places in which he suggested that saving faith is a process, not something which occurs at a point in time. Maybe I misunderstood. But when speaking of “unsaved believers,” he said, “John often portrays people as ‘believing’ in Jesus who are clearly not born again. He clearly envisions a stage in the progress of belief in Jesus that falls short of genuine saving faith and thus falls short of salvation” (p. 48, emphasis added). The progress of belief? “There is in John’s Gospel, therefore, a transitory, superficial, surface faith or belief…” (p. 50, emphasis added).

He sees the people discussed in Heb 6:4-6 as unbelievers. He favorably cites Grudem who says “these experiences are all preliminary to those decisive beginning stages of the Christian life” (p. 113). The discussion here is weak. It is hard to think of a stronger way that one could refer to a born-again person than the five participles in Heb 6:4-5. Yet no exegesis is done by Storms to show that these really are not believers. Rather than studying the expression once enlightened (hapax phōtisthentas), he merely pontificates, saying, “‘Enlightened’ need mean no more than to hear the gospel, to learn or to understand” (p. 111). Where is the evidence?

Nor does he discuss other uses of the word taste (geuomai), which also occurs in Heb 2:9 of Jesus tasting death. Again, he simply asserts that this means that the readers had “a genuine spiritual experience…They have experienced some degree of blessing” (p. 111). But he says it was not “a genuine saving experience” (p. 111; compare p. 113).

Storms does at least proof text “having become partakers of the Holy Spirit.” He cites Luke 5:7 and Heb 1:9, without quoting them and without discussing the contexts.

The fruits in question are the false teachings of the false prophets. Compare Matt 12:33-37 where fruit is identified as words spoken.

After having read five pages’ worth of discussion of how Calvinists understand falling from grace in Gal 5:2-4 (pp. 145-49), I was moved to see this honest and humble admission by Storms: “Although I’m not entirely satisfied with any of the interpretive options suggested by Calvinist scholars, one of them must surely be correct” (pp. 149-50).

Only Those Who Persevere

Like most Calvinists, Storms says that only those who persevere to the end will prove that they were really born again in the first place. Hence for him assurance is not certainty. It is impossible to be sure that you are born again because you cannot be sure you will persevere. “In the absence of all this, no one can be assured of salvation” (p. 57). In the previous sentence he defined all this as follows, “It means we are always prayerful, embedded in Christian community, worshipping Jesus in all of life, and living on mission with him every day” (p. 57).

No one can be sure he will continue to do those things.

A character in the book who comes up in the Introduction and several other times is “Charley.” He is a young man who grew up in a Christian home, professed faith in Christ at twelve, was baptized, and was discipled by the youth pastor for several years. “Charley’s faith appeared to be quite vibrant and joyful. He endured the same trials and temptations as do virtually all teenaged boys, but he never wandered far or failed to repent when he sinned. He prayed every day and read his Bible and was growing in his understanding of God” (p. 11). But. College. “It wasn’t long before Charley stopped attending church and eventually declared himself to be an atheist” (p. 12). Worse still. “Charley is now thirty, already twice divorced, an alcoholic, and painfully bitter and unpleasant to be around” (p. 12). Unless Charley comes back to the Lord, he will end up in the lake of fire because he will prove he never had true saving faith (pp. 54, 191).

In the conclusion, after bringing up Charley and a similar case study called Charlene, Storms says, “Scripture does not give us warrant for assuring them that no matter what has happened ‘it is’ still ‘well’ with their soul. Sadly, it may not be” (p. 191).

Of course, if Charley had died before college, then Storms would have said he was likely with the Lord now. He just lived too long. What about Storms himself? What if he becomes an atheist and alcoholic in his senior years? Wouldn’t he then be just like Charley?

I know that could happen to me. Anyone who does not think he can fall is much more likely to fall.

The last two sentences of the book are quite telling. Speaking about Charley and Charlene: “In the final analysis, as much as we’d like to have a well-grounded reason to draw a definitive conclusion about his or her salvation, only ‘the Lord knows who are his’ (2 Tim. 2:19a). We don’t” (p. 191).

We don’t know who is born again and who is not.

I highly recommend this book for well-grounded believers. I would not, however, recommend it for new or poorly taught believers or for unbelievers.