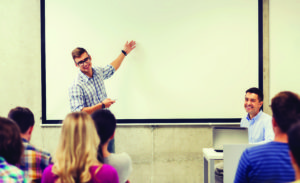 In Acts 18:24 we are introduced to a man by the name of Apollos. We are told that he was an “eloquent man and mighty in the Scriptures.” He lived in a Greek culture where eloquence was a much desired trait. Luke goes on to say that Apollos had been “instructed in the way of the Lord” and was a man fervent in spirit (v 25).

So here was a man who was a great speaker and had the intelligence to go along with it. We can assume that Apollos was the kind of man that fellow believers would have admired. If he lived today, it would be easy to picture him in the pulpit of a large church or being a well-liked and popular seminary professor. He probably would have authored a couple of best selling books.

But as gifted as Apollos was, there is another trait in this passage in Acts that in my opinion stands out even more.

Luke tells us that Apollos was teaching in the synagogue. A couple named Aquila and Priscilla were in the audience (v 26). While this couple is described in the NT as great servants of the Lord, their ministry in the church was not a public one. They certainly did not have the speaking skills of Apollos.

Luke tells us that there were certain things that Apollos did not know. Aquila and Priscilla, after hearing him speak, noticed that there were “holes” in Apollos’ theology. They took him aside to teach him things he needed to correct, or as Luke says, they “explained to him the way of God more accurately.”

So, here was a nondescript couple, Aquila and Priscilla, teaching a rising star in the early church. This couple were tentmakers by trade. One can picture many people in the synagogue who were listening to Apollos speak, hanging on his every word. Then Aquila and Priscilla came up to him and told them they could help him in his ministry.

I would imagine that many in his position would have an arrogant attitude towards this couple. Who did they think they were? What
could they possibly teach this golden tongued, educated preacher? The people had come to hear him speak at the synagogue. It would have been easy for Apollos to reject any advice this couple could give him.

But that was not the attitude of Apollos. The way Luke describes what Aquila and Priscilla did, we see that Apollos accepted the correction
to his theology that they gave him. The next two verses tell us that as Apollos continued his ministry, it was a highly fruitful one. The implication is that Aquila and Priscilla had a hand in that.

To me, the greatest trait of Apollos in this section is his willingness to be taught. He was willing to change his view of certain theological
points when confronted with the truth. The more gifted a person, the harder that is.

We in the Free Grace movement often find ourselves in the position of Aquila and Priscilla. We often hear the gospel of grace distorted, or
a denial of eternal rewards, or certain passages mishandled. We might want to speak to the person involved but face a daunting task. What
we have to say often goes against what well-known and successful Biblical teachers say. How could we possibly be right when popular experts tell us we are wrong? Experience tells us that our offer of help is often rejected.

But it is the same with us. It takes humility to admit we are wrong and need correction. It is probably harder to do if we have been in public
ministry or even if we have been believers for a long time. Sometimes we can be Aquila and Priscilla and can be of assistance to others. Other times, we need to have the attitude of Apollos and accept what others can help us with. If we are going to accurately divide the Word of God and teach others, being humbly teachable is one of the greatest traits we can have.

____________________
Ken Yates is Editor of The Journal of the Grace Evangelical Society and GES’s East Coast and International speaker. He is the pastor of Little River Baptist Church in Jenkinsville, SC.