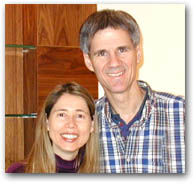 I decided to see if I could run a marathon. So I extended my distance. I got to where I was running eight miles at a time at a pretty good pace.

At this time I was invited to speak at a very big church in Colorado Springs. My friend, Steve Thurman, had planted a church there. It went from a Bible study to 2,000 people. He and Donna were soon to leave for New Zealand as missionaries.

I spoke at both services and really enjoyed my ministry there.

After church several people took me out to lunch. When I went to the bathroom, I noticed my urine was brown. I was concerned. I had had blood in my urine before. I was worried this might get worse. It did. A lot worse.

By the time I landed in Dallas, my urine looked like it was straight blood.

The next morning I saw my urologist. He scheduled me for various tests. One test showed no kidney stones. There was just a bunch of white static like stuff on the x-ray.

They did other tests that showed I had no cancer that they could see.

Now my urine had blood clots in it. I was losing a fair amount of blood. After twenty-one days of what they call gross hematuria, I was facing the need for a transfusion.

Then the urine turned brown. Then it was clear again.

My urologist decided that all those white flecks in my x-rays probably were something. They were probably thousands of little kidney stones.

I had not hydrated at all while doing my long runs. I would run eight miles in the Dallas heat and not drink anything until the run was over. And even then I did not drink much. That was a terrible idea.

Since then, I’ve had three or four more bouts with kidney stones. But I’ve not had gross hematuria since then. When I think about it I’m very thankful that my urine is clear. Twenty years ago I thought the blood in my urine was a sign that I was dying.

The lesson for me spiritually has been that I need to be wise in how I take care of my body. I can only do ministry if I am healthy enough. So now I drink lots and lots of water. And knee and hip issues a few years after that moved me to take up racewalking. I’ve been able to complete five marathons, though I’ve had to do that by racewalking.

Thank you, Lord, for good health. I no longer take it for granted.