Home
→
Blog
→
Are All Who Identify as Free Grace Cessationists?
July 5, 2022 by Bob Wilkin in Blog - Cessationism, charismatic, pentecostal

The following question was put on the GES Facebook page in light of a recent post there: “Are all who identify as Free Grace cessationists?”

That is a great question.

Cessationism is the view that the sign gifts ceased in the first century during the lifetimes of the apostles. Tongues, interpretation of tongues, prophecy, and healing (via a person with that gift) no longer operate today.i

While I believe in cessationism, and GES as a ministry does as well (it is in our doctrinal statement), some people in basic agreement with Free Grace Theology (FGT) are charismatics or neo-charismatics. I think of people like R. T. Kendall and Michael Eaton. While neither has, to my knowledge, ever identified as holding to FGT—they may not even be familiar with that label, I think they agree that faith is simple persuasion, and that in order to be born again one must believe in the Lord Jesus Christ for the gift of God, that is, for everlasting life that cannot be lost.

Jack Deere, a well-known third-wave proponent, might agree with that as well. When I graded for him at DTS, he was a good friend of Zane Hodges and his theology. I’m not sure if he still holds to FGT.

Beyond those three, I do not know of any third wave or charismatic theologians who hold to eternal security, let alone FGT. My guess is that there are more. But most would not agree with FGT on justification or sanctification.

Most charismatics and neo-charismatics believe in Arminian Lordship Salvation. That is, they believe that one is born again by faith plus commitment and obedience, and that one stays saved only as long as the faith, commitment, and obedience continue.

Non-cessationists typically differ from FGT in the area of sanctification as well. FGT says that one is progressively sanctified by the Spirit of God taking the Word of God and renewing our minds (Rom 12:2; 2 Cor 3:18; 1 John 1:7-9). But charismatics, neo-charismatics, and Pentecostals look not simply to the transforming power of God’s Word, but also to the transforming power of tongues, prophecy, healings, words of knowledge, and so forth. Their view of sanctification includes a strong emphasis on feelings. The fact that they feel God’s presence is a key part of their Christian lives.

Of course, FGT does not devalue feelings. But we do not put our faith in feelings either for justification or sanctification. We are born again by “the word of truth” (Jas 1:18). And we are progressively sanctified when “with unveiled face, [we] behold as in a mirror [God’s Word] the glory of the Lord” and are “transformed into the same image” (2 Cor 3:18).

i Many people claim to do these things, and not just in Christianity. However, objective studies reveal that these things are not the gifts we see in the New Testament. I remember that during the year I taught at Multnomah School of the Bible, Dr. Garry Friesen used to send his students to healing services and asked them to compare what they saw and heard with the Biblical evidence of sign gifts. They came away convinced that what they had observed was not legitimate. 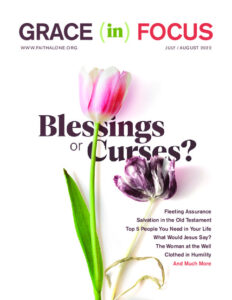