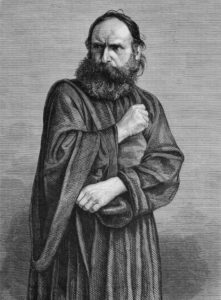 While doing a Logos search I discovered that the expression woe to that man (ouai tō anthrōpō ekeinō) occurs only four times in the NT, twice in Matthew (18:7; 26:24) and once each in Mark (14:21) and Luke (22:22). I wondered whether the Lord might have a specific man in mind in all these places, since in three of the four it is clear who that cursed man is.

The Son of Man indeed goes just as it is written of Him, but woe to that man by whom the Son of Man is betrayed! It would have been good for that man if he had not been born.

The Lord is speaking of Judas Iscariot, the betrayer. Mark 14:21 and Luke 22:22 are parallel and also refer to Judas using the expression woe to that man.

Whoever causes one of these little ones who believe in Me to sin, it would be better for him if a millstone were hung around his neck, and he were drowned in the depth of the sea. Woe to the world because of offenses! For offenses must come, but woe to that man by whom the offense comes!

Then Jesus said to them, “All of you will be made to stumble because of Me this night, for it is written: ‘I will strike the Shepherd, And the sheep of the flock will be scattered.’”

The word stumble is the same word used in Matt 18:6, skandalizō (translated as cause to sin there). When Judas betrayed Jesus he also caused the eleven to stumble during the Lord’s trials and crucifixion.

Jesus used the words skandalizō and skandalon six times in Matt 18:6-9. It is translated there as causing another to sin or causing an offense. I believe that in Matt 18:6-9 the Lord was giving a warning to Judas, which sadly went unheeded (cf. John 13:10-11; 17:12).

1. Editor’s note: Clearly the passage begins with Jesus sitting “a little child” in the midst of the crowd (Matt 18:2). That is literally a child, a little one. However, it is possible that in vv 6-9 “these little ones,” while still including those who are literally small children who believe in Him (v 6 “who believe in Me”), might, as Fiess suggests, include the disciples, since all believers are to be as little children (v 4).