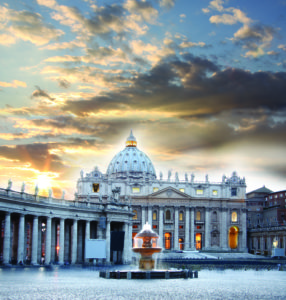 We have seen that one of the effects of Replacement Theology was the transformation of the church into a priestly hierarchy. This in turn obscured the Biblical doctrine of salvation by grace through faith. On a personal level, this is the most serious consequence of Replacement Theology, as the new priestly cast claimed to mediate God’s grace through priestly administrations, later called “sacraments.” This new concept of Christian ministry does not have roots in the New Testament but rather in the instructions given to Levitical priests in the book of Leviticus.

Among those who have received the “sacrament” of baptism in their infancy, how many take the trouble to know what the Apostles teach concerning how salvation can be experienced personally? Do they know that to experience salvation it is necessary to believe personally in the risen Christ and in the sufficiency of His atoning sacrifice (John 3:14-16; Acts 4:12; Rom 3:23-26; 4:25; 10:9)? Do they know that no one comes to the Father except through Jesus Christ the Son (John 14:6; 2 Tim 2:3-6)? Do they know that Jesus’ priestly role will never be delegated to anyone else (Heb 7:22-25)? Do they know that it is the Holy Spirit who dispenses grace and implants new life in those who believe (John 1:11-13; 3:3-8; Titus 3:4-7)?

Unfortunately the false priesthood and the priestly functions which developed within Christianity, on the foundation of Replacement Theology, continue to create, in innumerable people, the illusion of being right with God. In reality, only Jesus “is able to save completely those who come to God through him, because he always lives to intercede for them” (Heb 7:25).

According to the divine revelation that God entrusted to Israel, there will be a time when a descendant of David will establish a universal kingdom of peace and righteousness centered in Jerusalem (Gen 49:10; Isaiah 2 & 11; Ezekiel 34; Zechariah 12–14; etc.). Jesus and the Apostles confirmed this prospect, linking it with the Second Coming of Christ (Luke 19:11-27; Acts 1:6-8; 3:19-21; 1 Cor 15:23-28). From the Book of Revelation we learn that when Christ comes in glory, at the end of a period of great tribulation, He will judge the Beast and the false prophet and will then reign for one thousand years, while Satan will be bound. At the end of Jesus’ earthly reign, Satan will instigate a further rebellion against God, inducing the nations to attack “the city that God loves,” Jerusalem, but this rebellion will be immediately repressed. Then, after the Great White Throne Judgment, time will give way to eternity when God makes “everything new” (Rev 19:11–21:5).

That is a very brief summary of what the prophets, Jesus, and the Apostles teach us about the future reign of Christ. In the early days of the Church this prospect was considered an integral part of orthodox belief. So much so that Justin Martyr, around 140 A.D. could write,

But I and others, who are right-minded (orthogōmones) Christians on all points, are assured that there will be a resurrection of the dead, and a thousand years in Jerusalem, which will then be built, adorned, and enlarged [as] the prophets Ezekiel and Isaiah and others declare.1

This doctrine held the field from the time of Papias (ca. 120 A.D.) until the last period of the life and ministry of Augustine.2 It is instructive to read Augustine’s own account of what made him change his mind on this point. It was not careful Biblical exegesis.3

By mentioning Augustine, we have skipped over Origen’s attempt to overthrow the Church’s teaching concerning an earthly Messianic kingdom. Origen is famous for his allegorical interpretation of the Bible, following the way the Greeks interpreted passages from their classical writings which they could no longer accept at face value. R. Hanson has this to say about Origen’s denial of eternal punishment, a denial based on the allegorical interpretation of the relevant Biblical passages: “Origen was obviously moving with the tide of contemporary sentiment.”4 Regarding the Millennial kingdom, Hanson observes:

The presupposition of Origen’s denial that there will be a literal Messianic kingdom was a very radical version of Replacement Theology, according to which true, spiritual Israel had always been the Church.

Especially after Origen, the traditional interpretation of Rev 20:1-6 was on shaky grounds because this was the only remaining Biblical passage concerning a Messianic kingdom that continued to be taken literally by most interpreters. Replacement Theology had effectively removed the foundations of this doctrine in the Scriptures used by Christ and the Apostles. So, by the time of Augustine, the only thing necessary in order to apply all kingdom teaching to the Church was an alternative interpretation of Rev 20:1-6.

The alternative interpretation on Rev 20:1-6 supplied by Augustine has some important exegetical flaws. Among other things, it ignores references in Revelation to Satan deceiving the nations.6 Augustine attributes his change of mind concerning the meaning of the passage to dissatisfaction concerning how others had interpreted it. But in reality it was more the result of current events, in particular the sack of Rome in 410 and the accusation that the Church was largely to blame for this calamity. Augustine answered this accusation by suggesting that the kingdoms of men were in the process of being replaced by the kingdom of God. Revelation 20 was used in support of this thesis. For Augustine, Christ’s kingdom is to be identified in the Church, especially the hierarchy and the martyrs.7 By the way, the presumed role of the martyrs, as reigning with Christ, favored the practice of praying to the “saints.”

How Augustine’s Kingdom Teaching Was Applied

The transformation of the Church into an institution governed by a hierarchical priesthood had prepared the way for a very dangerous application of Augustine’s teaching concerning the kingdom of God. The prestige gained by Leo I, bishop of Rome, at the Council of Chalcedon (451 A.D.) and consolidation of the political power of the Roman Catholic Church by Gregory the Great (590-604) paved the way for the Western Church to become the Triumphant Church of Medieval times. This long chapter of Church history is remembered mainly in relation to the exercise of temporal power.

The consequences of the Augustinian understanding of the Messianic kingdom, known as “Amillennialism,” are well-known. Far from incarnating the values of the kingdom of God, successive popes exercised purely human power, not hesitating to fabricate the false “Donation of Constantine” which gave the Catholic Church its own territory. The acme of abuse of the claim to act in the name of Christ may be seen in the reigns of Urban II (1088-1109), who authorized the first of the Crusades (1096-1103), which condoned the massacre of both Jews and Muslims. Two centuries later, Boniface VIII (1294-1393) issued the Papal Bull “Unam Sanctam” according
to which secular governments possess a little sword, while the pope uses his Godgiven big sword to wield authority over all purely human governments.

The abuses of power mentioned above were the logical consequences of the course taken by the Roman Catholic Church, based on the (false) claim to be the true Israel. According to Peter Beyerhaus, failure to observe the distinctions between the different stages in which the redemptive economy of God is unfolded has the effect of “changing the Kingdom of Heaven as promised and given to God’s sons and daughters into a Kingdom on Earth which is to be constructed solely by the autonomous efforts of man himself.”8 The claim of the Triumphant Church to be the kingdom promised to Israel was one of the long-standing effects of Replacement Theology. However, because God was not behind this operation, instead of the universal blessing of which the prophets speak, the Medieval Church produced much injustice and suffering—not to mention the damage done to Christian witness to the Jews.

Ronald E. Diprose was Academic Dean at Istituto Biblico Evangelico Italiano, Rome, for twenty five years, and is Editor of the theological journal Lux Biblica. For more information on Replacement Theology please read his book, Israel and the Church: The Origin and Effects of Replacement Theology (Waynesboro, GA: Authentic Media, 2004).

2. A future Millennium was taught, by Papias, Justin Martyr, the Epistle of Barnabas, Tertullian, Commodianus, Eusebius, Methodius, Lactantius and others (see my Israel and the Church, 148-159).

4. R.P.C. Hanson, Allegory and Event: A Study of the Sources and Significance of Origen’s Interpretation of Scripture, (Richmond, VA: John Knox Press, 1959), 341.