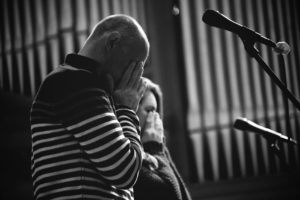 One of the greatest blessings that the Lord has given me is that I was raised in a Free Grace home. My father, Ken Yates, and I spend a lot of time together. Many of our conversations center around theology. Not too long ago, my dad wrote a blog for GES about the issues concerning personal testimonies. This article is an extension of what my dad said in his blog and the discussions we have had.

As a general rule, the average testimony given in our churches today is misleading and profoundly rooted in Reformed Theology. Here’s a recent example.

Not too long ago, I was sitting at a table with three Evangelical missionaries. The conversation turned to salvation, and each man proceeded to give his personal testimony.

The first described how he went into a church and bowed his knees at the altar and cried out to God.

The second said he was saved as a child when he prayed for forgiveness and asked the Lord to enter his heart.

The third gentleman gave a detailed account of his life prior to salvation. He was a bad kid growing up. He bullied girls, stole candy, was a terrible student in school, and was disrespectful to his teachers. He went on to say that he accepted Jesus as his Lord and Savior. After he was saved, he no longer bullied girls, or stole things, and his teachers and classmates were all amazed by the transformation in his life.

I think most Christians can relate to the experiences I have had listening to the testimonies about how people became Christians. These are standard examples of how people give their testimonies. In fact, if you google “how to give a testimony,” a common formula you will find is as follows:

Step 1: Describe your sinful life prior to salvation.

Step 2: Describe the moment of salvation.

Step 3: Describe how you have stopped sinning now that you are saved.

This formula, or one similar to it, is often found in Christian literature, in practice, and when people train to do evangelism. Perhaps we have used it ourselves. I think we should reconsider this way of doing things.

There are a number of problems with the way testimonies are often given. First, it is fundamentally a Lordship formula. Lordship Salvation claims that in order for a person to be saved he must submit his life to the Lordship of Jesus Christ. He must turn from his wicked ways and give his lives to Jesus. This is demonstrated in the “before” and “after” of personal testimonies. Sadly, this places salvation on the works of the individual and not on the promise of Jesus Christ to all who simply believe in Him for eternal life as a free gift.

Second, this formula emphasizes sin rather than belief. In fact, in all three examples above, not a single testimony mentioned belief or eternal life. The focus of these testimonies is often on the lifestyle of the person rather than what that person came to understand and believe about Christ.

Third, it is very confusing to an unbeliever. Oftentimes, people use their testimonies as a way to evangelize. When unbelievers hear testimonies like these, they walk away thinking one of two things. First, that they must clean up their lives in order to be saved, or that if they are saved, they will no longer struggle with sin. One places assurance on one’s work; the other robs people of assurance the moment they struggle with sin. But assurance comes when we believe in what Jesus promises us, which is eternal life.

A Biblical Testimony Isn’t As Exciting

We all love to see “before and after” pictures of people when they lose weight. There is something impressive about a 300 pound man losing 100 pounds. Marketing gurus know this, which is why we see them so often in commercials. It makes people think that whatever weight loss program they are trying to sell you is a quick fix.

But we all know that weight loss doesn’t work that way. Discipleship and maturity in our Christian walk do not work that way either. It takes time, self-control, discipline, and lots and lots of grace (1 Cor 9:25-27). Sadly, what we often see in testimonies is a mixing of discipleship and salvation. People sandwich months, if not years, of sanctification growth in their salvation accounts and make it sound as though both occurred simultaneously.

We need to make these two experiences distinct. There is a time and place for testimonies in which we have seen the Lord transform us and helped us overcome sin in our lives. These types of testimonies are incredibly edifying for other believers, especially for those that may be struggling with similar situations. We can encourage other believers with our “weight loss” journey within the context of discipleship. This is not the same as discussing our salvation experience.

So, what does a clear salvation testimony sound like? The Apostle Paul is often seen as the gold standard answer to that question. His example is often portrayed in light of his works. Prior to salvation, Paul killed Christians; he was a Pharisee and blasphemed God. After he was saved on the road to Damascus, he became the greatest missionary of all time, wrote many books in the NT, and established churches throughout the Roman Empire.

Talk about a Jenny Craig commercial! You will even hear folks ask, “What was your Damascus road experience?” when they want to hear your own salvation account. It’s an intimidating comparison and carries with it a lot of confusion. While Paul describes his life prior to salvation in terms of his disobedience towards God (1 Tim 1:13), he also describes himself as blameless in regards to the law (Phil 3:6). Someone might even describe Paul as a righteous Jew, and his lifestyle prior to being saved was characterized by obedience towards God. However, his lifestyle prior to and after salvation is not relevant. When Paul gives his testimony to Timothy, he writes: “However, for this reason I obtained mercy, that in me first Jesus Christ might show all longsuffering, as a pattern to those who are going to believe on Him for everlasting life” (1 Tim 1:16, emphasis added). The issue we see in Paul’s testimony isn’t his change in lifestyle. It is that he believed in Jesus for eternal life.

Therefore, if we want to follow Paul’s example, we should talk about faith. A possible format for how a believer could give his testimony is to describe what it was that he believed prior to salvation. This will be different for each of us. Maybe you were an atheist prior to salvation or a member of a cult that taught that salvation is by works. Whatever your belief system prior to salvation, describe it and why you came to the realization that it was wrong. Then describe the moment you understood that it was by faith in Jesus for eternal life. You could use the Scripture that brought you to that understanding.

Not too long ago, I attended a church where I was asked to give my testimony. I remember being uncomfortable about the experience, but at the time I wasn’t sure why. It wasn’t until I began to process how people traditionally give testimonies that I began to understand what was going on in my thinking.

My testimony wasn’t exciting. There was no major lifestyle change when I became a believer. You might even say that my testimony was boring. I think some people even questioned its authenticity because I never described a “before and after” experience. I was saved when I was a child. I don’t remember it. I couldn’t tell you how old I was. In fact, I have no memory at all of the day I was saved. I just know that there came a time in which I knew I had eternal life because Jesus promised it to me. My prayer is that everyone can come to know and believe the same promise. When we give our testimony, the personal details may be different. But the message will always be the same. We became children of God and received eternal life when we believed in Christ for that wonderful gift.

Kathryn Wright is a graduate of Luther Rice Seminary and teaches overseas.