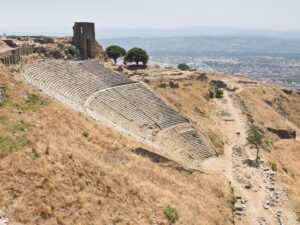 BEWARE OF DOCTRINAL AND MORAL COMPROMISE

There are similarities between the New Testament world and ours. When the apostle John wrote down Jesus’ message to the seven churches, philosophies from the East, from Egypt, and from the hills beyond Pergamum were sweeping through the Mediterranean world. People were spiritually hungry, but not morally disciplined. Some of the spiritual practices involved sexual rites and the use of wine or drugs. Today, people are spiritually hungry, but many ignore the true source of life. Instead, they dabble in astrology, mysticism, eastern philosophy, or the worship of money, sex, and power.

Pergamum had believers within the church who were succumbing to false teaching. The same is true of believers today. We can learn from the message of Jesus to the believers at Pergamum and reorient ourselves to truth.

Forty miles north of Sardis sat ancient Pergamum. It was the center of Roman authority in the province. It became the site of the first temple of the Caesar-cult, erected in honor of Augustus Caesar. The city also housed an ancient temple to the God Zeus. The altar from that temple is in the Berlin Museum and was often visited by Adolf Hitler.

Pergamum was known for its Asklepion, a healing and medical center. Here, religious meditation, dream interpretation, snake-handling, and medical arts were combined for healing purposes. The Sacred Way led from the Asklepion, built in honor of the god of healing, toward the Acropolis, which rose a thousand feet above the plain. Near the summit stood the immense altar to Zeus.

There was little distinction between religion and politics in Pergamum. The city’s coins depicted intertwined serpents to represent the interconnection between the sacred and the secular. For the pagans in this city, politics was religion, and religion was politics. For the believers in Christ, there was a constant temptation to compromise their beliefs and practices for political and economic gain.

Jesus told the church at Pergamum, “I know where you live.” He assured these believers that He knew they dwelt in a city under Satan’s control. He understood the persecutions and temptations they experienced from the rampant Satan-inspired religions. He praised them for holding fast to Him in the face of danger and persecutions.

Some believers in the church of Pergamum died for their faith. Jesus singled out one man, Antipas, and called him “My faithful martyr.” The word “martyr” meant “witness” and has come to mean those who witness by their death. Church tradition tells us that Antipas was brought before a statue of Caesar and told to swear that Caesar was God. But Antipas proclaimed that Jesus alone is Lord and that there is no other God but Him. Antipas was put to death for that.

Jesus had a severe criticism for the church. They were tolerating those who followed Balaam’s teachings and that of the Nicolaitans.

Balaam is most often remembered for the talking donkey incident. He was a prophet hired by a king named Balak to utter a curse on Israel (Num 22–24). God would not let him do this and even made Balaam’s donkey talk back to him to restrain him. Balaam then advised Balak to send women to seduce the Israelite men and draw them into the worship of false gods, thus incurring the judgment of God (Num 25:1-3; 31:16). Balaam’s clever notion was to bring down Israel by an indirect attack on their morals and faith. Balaam is a prototype of corrupt teachers who betray believers into fatal compromise in morals and beliefs.

Knowing this about Balaam helps us to know what was going on in Pergamum. Several religions of the area involved festivals and temple prostitution. Apparently, some of their practitioners had infiltrated the church and were leading some believers into sexual immorality and idolatry.

The Greco-Roman world looked upon sexual promiscuity as an acceptable way of life. For example, Demosthenes stated, “We have prostitutes for the sake of pleasure. We have concubines for the sake of daily cohabitation. We have wives for the purpose of having children legitimately and of having a faithful guardian of our household affairs.” Cicero argued, “If there is anyone who thinks that young men should be forbidden to love a prostitute, he is extremely severe. He is at variance, not only with the license of what our age allows, but also with the customs and concessions of our ancestors.”

There were those in the church who said, “Live like everyone else around you.” They asserted that the standards of the world could also be an accepted pattern of life for believers. This doctrine of Balaam is also around today.

Jesus referred to the eating of food sacrificed to idols. We are free to eat or not to eat such food (see Romans 14; 1 Corinthians 8; 10:20-30). Why was it such a problem here? Apparently, believers were being drawn into pagan practices by participating in their feasts. As such it would have been better to avoid these feasts altogether.

Jesus condemned the teachings of the Nicolaitans. Irenaeus said that they were followers of Nicolaus of Antioch, a proselyte who was among the seven men chosen to serve the Jerusalem congregation (Acts 6:5), and who had forsaken true doctrine and lived in unrestrained indulgence (Against Heresies I, 26:3). Hippolytus confirmed this by noting that Nicolaus abandoned correct doctrine and had the habit of indifference as to what a man ate and as to how he lived (Refutation of Heresies 7:24). Although Clement of Alexandria defended Nicolaus by explaining that his followers had misunderstood him, he observed that the Nicolaitans abandoned themselves to pleasures like goats in a life of shameless self-indulgence (The Miscellanies 2:20). They advocated license in matters of Christian conduct, including free love.

It may be that the doctrine of the Nicolaitans was dualistic. They reasoned that the human body was evil, and the spirit was good. A believer, therefore, could do whatever he desired with his body because it had no importance.

These false teachers believed that a little idolatry or a little immorality or a little compromise of the truth couldn’t really hurt anything. When believers commit adultery, cheat in business, or compromise their doctrinal or moral standards to fit the situation, they fit into the Pergamum mentality.

Jesus exhorted the believers to repent! They were to turn from their compromise and separate themselves from those who taught things contrary to the truth.

To those who overcome, Jesus promised three things: 1) hidden manna, 2) a white stone, 3) a new name.

Jesus does not want believers to be lured away from fellowship with Him. If we refuse to be drawn away by the enticements of false religions, Jesus promises “hidden manna,” special fellowship meals with Him.

Jesus will also give us a white stone inscribed with a new name. Such a white stone with one’s name on it was the basis for admission to special events. It was also a custom to reward victors at the games with such a token enabling them to gain admission to a special feast. The “hidden manna,” the other part of the reward, also suggests a reference to the Messianic feast. The white stone is, then, a personalized tessera, which would serve as a token of admission to this great future feast. The giving of the white stone to the believer indicates that he has been favored by Jesus. The new name might reflect the proven character of the overcoming believer.

WWJS to the church tolerating false doctrine: “Don’t succumb to false teaching, and don’t tolerate it.” He who keeps himself from spiritual and moral error will receive a double blessing in the life to come. The one who overcomes will enjoy special fellowship meals with the Lord Jesus and will be honored with a special name. Feast with Christ today, and feast with Him in glory.

Philippe Sterling is the pastor of Vista Ridge Bible Fellowship in Lewisville, TX. He and his wife of 45 years, Brenda, live in Denton, TX, near their daughter, Sarah, son in law, Ben, and grandkids.