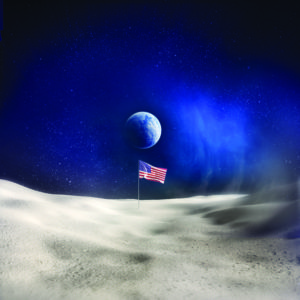 Apollo 11 carried to the moon a Goodwill Disc that had messages from seventy-three countries. This thin silicon disc was left in a simple cloth pouch in an aluminum case on the Sea of Tranquility in July 1969 by astronauts Neil Armstrong and Buzz Aldrin.

This Psalm of David begins and ends with the same phrase, “O Lord, our Lord, how majestic is your name in all the earth” (ESV). It frames the content of the Psalm in the praise of the majesty of God. The Psalm asks a penetrating question, “What is man that you are mindful of him, and the son of man that you care for him?” (ESV). The question occurs essentially in the middle of the Psalm. When we observe what leads up to the asking of the question and what follows from it, we notice that the Psalm has a particular (i.e., chiastic)1 structure:

The first part of verse 1 is the introductory refrain, “O Lord, our Lord, how majestic is your name in all the earth!” It is a note of praise to the Lord of Creation. God’s majestic name is His revealed character which is exalted above all Creation. God displays His majestic name in the greatness of creation and in His grace towards man.

“You have set your glory above the heavens. Out of the mouth of babies and infants, you have established strength because of your foes, to still the enemy and the avenger” (ESV).

David marveled that God uses strength from infants to silence his enemies. The idea is that God uses the weakest to confound the strong (see 1 Cor 1:27). God used the young David to defeat Goliath (1 Sam 17). The birth of the baby Jesus brings salvation to the world (Luke 2:1-38).

King David first observed the great work of Creation, and then was amazed that weak finite man should have responsibility over it:

When I look at your heavens, the work of your fingers, the moon and the stars, which you have set in place, what is man that you are mindful of him, and the son of man that you care for him? (ESV).

The sun’s blinding light usually blots out anything else we might see in the heavens during the day, but at night, we are amazed by the display of beauty from the moon, stars, planets, and galaxies. God spoke the worlds into existence, but David pictured Creation as coming from God’s fingers, the work of a Master Sculptor. What we know today about the size of the universe makes the earth and its inhabitants look even more insignificant than they appeared in David’s day.

An explorer by the name of William Beebe was a good friend of President Theodore Roosevelt. Sometimes when he visited the President at Sagamore Hill, the two men would go outdoors at night to see who could first locate the Andromeda galaxy. Then, as they gazed at the tiny smudge of distant starlight, one of them would recite,

“That is the spiral galaxy of Andromeda. It’s as large as our Milky Way. It is one of 100 million galaxies. It is 750,000 light years away. It consists of 100 billion suns, each larger than our sun.”

Then Roosevelt would grin and say, “Now I think we are small enough! Let’s go to bed.”

What is a human being that God is mindful of him? How do we define humanity? This question has exercised the minds of men to our times.

Mark Twain published a book with the title What Is Man? in 1906. It is a dialogue between a Young Man and an Old Man regarding the nature of man. The Old Man asserts that the human being is merely a machine, and nothing more. The Young Man objects, and asks him to furnish his reasons for his position. Twain appears to uphold the view of the Old Man.

Isaac Asimov wrote a short story entitled “…That Thou Art Mindful of Him.” Two robots debate the subject of what is man and conclude that they as robots are a superior form of being that should usurp the authority of their makers.

Martin Luther King, Jr. delivered a sermon soon after his ordination entitled “What Is Man?” based on Psalm 8. He stated, “Although there is widespread agreement in asking the question, there is fantastic disagreement in answering it.” “There are some people,” he continues, “that believe man is little more than an animal and there are those who would lift man almost to the position of a God. There are then those who would combine the truths of both and see within man a strange dualism, something of a dichotomy.”

The Old Testament Scriptures pose the question “What is man?” twice. Most of us know of David’s reflections in Psalm 8. We rarely remember Job 7:17-18, “What is man, that you make so much of him, and that you set your heart on him, visit him every morning and test him every moment?” (ESV). Both David and Job pondered why God, having such greater power and majesty, should take interest in the human race.

The rhetorical question of Ps 8:4 emphasizes that man is an insignificant creature in the universe. Yet God cares for him immensely. It amazed David that the Lord of the universe even thinks about man.

God created man as His representative on earth. Picking up on the theme he began to raise in Ps 8:1b-2, David expresses amazement that God would exalt weak, finite man to such a place of honor and dominion:

Yet you have made him a little lower than the heavenly beings and crowned him with glory and honor. You have given him dominion over the works of your hands; you have put all things under his feet, all sheep and oxen, and also the beasts of the field, the birds of the heavens, and the fish of the sea, whatever passes along the paths of the seas (Ps 8:5-8 ESV).

Instead of humans being “a little higher than animals,” as evolutionists believe, we are actually “a little lower than God.” We are co-regents of Creation with God!

David reflected on man’s position as God’s representative in His Creation. After God made Adam and Eve, He commanded them to have dominion over all the earth (Gen 1:28). All living creatures were to be under them. But because of sin that dominion has never been fully realized.

Hebrews 2:6-8 quotes Psalm 8 to contrast man’s failure with his exalted destiny. Jesus Christ, the Son of Man, is the last Adam (1 Cor 15:45); all things will be subjected to Him when He comes to fulfill the Father’s intended plans for the Creation. Jesus has regained the dominion for us and will one day share it with us when He reigns in His kingdom.

Verse 9 is the concluding refrain, “O Lord, our Lord, how majestic is your name in all the earth!” The psalm closes with the same expression of praise for God’s majestic name with which it began (Ps 8:1a). God has displayed His majestic name in His care and design for man.

Matthew 21:16. Jesus uses the Septuagint version of Ps 8:2 to defend the children praising him as the Son of David.

1 Corinthians 15:27-28. Paul quotes Ps 8:6. Jesus’ dominion goes beyond the “sheep and oxen, and also the beasts of the field.” He also has dominion over all the earth and eventually all will bow to Him.

Hebrews 2:6-8. The writer of Hebrews takes the entire psalm to a Messianic level. The ultimate fulfillment of this psalm is about Jesus, crowned by God to overcome the enemy on our behalf. Though he is divine, the Son of Man took on flesh, was made a little lower than the angels, and was granted dominion over all of God’s works.

Jesus is the Christ who promises eternal life to all who simply believe in Him for it. The Apostle John gave this purpose statement for his book in John 20:30-31,

Now Jesus did many other signs in the presence of the disciples, which are not written in this book; but these are written so that you may believe that Jesus is the Christ, the Son of God, and that by believing you may have life in his name (ESV).

Jesus is the Christ who is now preparing faithful believers to reign with Him in the world to come (Heb 2:5-13). Psalm 8:4 poses the important question: “What is man that you are mindful of him, and the son of man that you care for him?” Is man only a highly developed animal as Darwin taught? Is he merely a biological machine, and nothing more?

Psalm 8 declares that God created man as His vice-regent to have dominion over all creation! Jesus the Christ has regained that dominion and will share it with all believers who are faithful to Him (see Rom 5:12-21; 2 Tim 2:8-13). Are you preparing to reign?2 If we are faithful to Christ in this life, we will reign with Him in the world to come (Luke 19:16-26; 2 Tim 2:12). As Jesus promised, the “overcomer” will rule over the nations with Him (Rev 2:26).

Philippe R. Sterling is the pastor of Vista Ridge Bible Fellowship in Lewisville, TX. He has a Th.M. from Dallas Seminary.

1. Editor’s note: A chiastic structure is one where the ideas stated in the first half of a section are repeated in reverse order in the second half. The center of a chiasm may be repeated, but not in this case. The structure of Psalm 8 is AB-C-B’A’. Other chiasms might be AB-CC’-B’A’. In some cases there is no center point per se, as in ABB’A’. It is difficult to know whether the human author intentionally wrote with a chiastic structure in mind. However, in the case of Hebrew poetry it is much more likely (than in prose) and it is extremely likely in the case of Psalm 8.