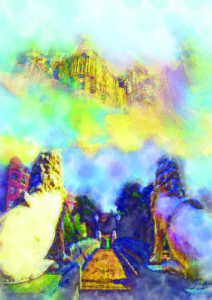 For he waited for the city which has foundations, whose builder and maker is God (Heb 11:10).

I believe that the city which Abraham waited for in Heb 11:10 is Jerusalem/the New Jerusalem (in the

Millennium and on the new earth, respectively).

A key to seeing this is that the author of Hebrews goes on to say that “he waited for the city which has foundations, whose builder and maker is God.” There is only one such city mentioned in Scripture and it is repeatedly called the city which God founded and the city whose foundation God placed.

Of course the New Jerusalem is the only city on earth mentioned in Rev 21–22. It is where Messiah will set His throne. All the kings of the earth will bring their treasures (glory and honor) to Him there (Rev 21:24).

Abraham knew about the reign of his Heir. He knew Messiah would rule forever from Jerusalem. And Abraham “waited for” that rule. That is, Abraham knew he would be raised from the dead and that he would share in the rule of Messiah in the Promised Land and in the Promised City.