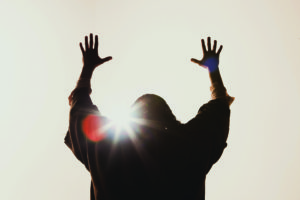 By Bill Fiess and Ken Yates

At the end of 1 John 2, the Apostle writes about the day when Jesus Christ returns (“He appears.”). John writes:

And now, little children, abide in Him, that when He appears, we may have confidence and not be ashamed before Him at His coming (1 John 2:28).

This is quite a statement. We all know people who are, by nature, confident. But John is talking about being confident before the Lord Himself when we stand before our King at the Judgment Seat of Christ. How is that possible?

Many times I have been in conversations with other believers about the Judgment Seat of Christ. Very often one of us will say that the idea of standing before the Lord and having Him evaluate our lives is a very sobering thought. No matter how confident a person may be in this
world, we simply cannot see how any of us could be confident on that day.

John tells us how we can. But we can also have confidence in another area.

The Key Is the Word “Abide”

First John is a small book. A very important word in it is the verb “abide.” It occurs over 20 times. It appears in 1 John 2:28, but the first time it occurs is in 2:6. In that verse, we see what it means. The person who “abides” in Christ is the believer who “walks just as” Jesus walked.

When we look at how the verb is used in 1 John, we see that the believer who “abides” in Jesus is the one who does what Jesus commands us to do. It is the believer who is comfortable—who feels at home—with the Lord.

John clearly says that such a believer can have confidence at the Judgment Seat. But John repeats this point later in the book.

Three Other Times John Says We Can Have Confidence

John mentions three other times that the believer can have confidence. This involves being confident in two areas. In 2:28, as we have seen, it deals with being confident at the Judgment Seat of Christ. In 1 John 4:17, he says the same thing.

In that verse, John says we can have confidence in the Day of Judgment. This is also a reference to the Judgment Seat of Christ. A believer can have confidence on that Day if he loves (4:17-19). The reason that confidence is warranted is because, as John says, the believer who loves has conducted himself in this world in a way which mirrors the Lord (4:17).

This, of course, is parallel with what John says in 2:28. The believer who is obedient to the Lord, who walks as He did, by loving other believers, is like the Lord. He is like the One who will judge him. If such a believer has done what the Judge has said and has lived like the Judge, he can expect that His Lord will be pleased with his life. He can be confident of that fact.

But such a believer can have confidence in a second area.

But this confidence in prayer, this assurance that we will receive whatever we ask of God, depends on a couple of things. First, that the believer “keeps His commandments.” This, of course, reminds us how we can have confidence at the Judgment Seat of Christ. The second
requirement is that the believer does those things that “are pleasing in His sight.”

John is saying that the believer who is abiding in Christ by doing what He asks of us will experience answered prayer. Such a believer is walking with the Lord and is at home with Him. He will ask those things that are pleasing to His Lord. He can have confidence that the
Lord will do what He asks.

This is what John repeats in the last instance in which “having confidence” is mentioned in 1 John. In 5:14 he says that the Lord hears if we ask Him “according to His will.” Such a prayer will result in receiving from the Lord what we ask.

The believer who is walking with the Lord, who is “abiding” in Him, will ask from the Lord according to His will. In the words of the famous song, he won’t ask, “O Lord, won’t you buy me a Mercedes Benz; my friends all drives Porches; I must make amends.” Instead, as a believer who obeys the Lord by loving others, he will ask those things that the Lord desires. He not only desires to answer those prayers, but because He is able to answer them, He will do so.

Many Christians have no idea that the Judgment Seat of Christ is coming. They have never been taught. But the day will come when we will give an account of our lives before the One who has given us eternal life. This Judgment has nothing to do with the gift of eternal life, but has everything to do with rewards in the kingdom of God. Even though it does not impact whether we will be in the kingdom or not, how can we keep being motivated by that Day? It only makes sense to live each day in light of the prospect of having the Lord look at our lives.

First John tells us we need to abide in Christ. We need to walk in obedience to His commandments. We need to make ourselves at home with Him. As we do, we live as He did. We live as the One who will judge us on that day. If we do that, we can have confidence that the Judge will approve of what He sees in how we lived.

We all know confident people. But four times John tells us how to be confident in our prayers as well as on that glorious day when we shall
see the Lord face to face. May we all have such confidence!

Bill Fiess teaches math in Virginia and is a Logos guru. Ken Yates is Editor of The Journal of the Grace Evangelical Society and GES’s East Coast and International speaker. He is the pastor of Little River Baptist Church in Jenkinsville, SC.