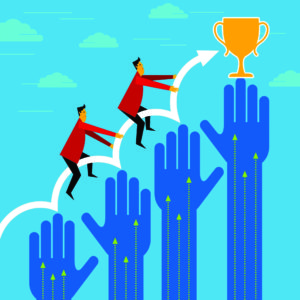 Among the very last recorded words of our Lord Jesus Christ are these:

“And behold, I am coming quickly, and My reward is with Me, to give to every one according to his work” (Rev 22:12; italics added).

Some Christians are troubled by the doctrine of rewards because this doctrine seems to suggest “merit” instead of “grace.” They argue that a doctrine of meritorious good works is a contradiction to the truth that we are not under the law but under grace (Rom 6:14).

This point of view is a serious misreading of the Scriptures. As a matter of fact, it badly confuses the doctrine of divine grace with the truth of human responsibility.

Look again at the words of Jesus quoted above. Our Lord says clearly that His “reward” is according to each man’s “work.” There is no way to escape the obvious implication that “rewards” are earned.

Salvation, of course, is not earned. Therefore it can be said to be “by grace…through faith” and “not of works” (Eph 2:8-9). Our works have nothing to do with whether we go to heaven or hell. Salvation is a gift and it is absolutely free. Faith in Christ is the means by which this gift is received.

Paul taught us clearly that grace and works are mutually exclusive. His words are important:

In the light of this clear-cut statement, we dare not confuse the Bible’s teaching about rewards with the truth of God’s unconditional grace to us. If we claim that rewards must be “by grace” then we are saying they can have nothing to do with “works.” But if we say that, we contradict our Lord’s words which relate His “reward” to each man’s “work.”

Lordship Salvation illustrates this unavoidable result. Since Lordship theologians claim that people must do good works in order to reach heaven, they cannot really call their doctrine salvation by “grace.” But of course they do claim to teach salvation by grace. Yet, according to Paul, what they call “grace” is no longer really grace!

But Christians who deny that the works considered at the Judgment Seat of Christ are really rewarded on the basis of their spiritual merits fall into a similar error. They are trying to fit “works” and “grace” together in a way that Paul says is impossible. In the process they will either distort the true meaning of grace or distort the meaning of work.

Now to him who works, the wages are not counted as grace but as debt (Rom 4:4).

In this verse, Paul uses precisely the same Greek word for “wages” that Jesus used in Rev 22:12. It is the
Greek word misthos, which basically means “pay, wages.” It clearly carries the suggestion of getting what one has earned. There is no getting around this Biblical truth. God gives us His salvation, but He pays us for our good works. To confuse these two lines of truth is to subvert the doctrine of grace and the doctrine of works in Scripture. It is an attempt to mix spiritual apples and oranges. The result can only be confusion about the true nature of both of these great themes in the Bible.

This is not to say, of course, that there is no connection between God’s grace to us and the works that we do for Him. Of course there is a connection! We would not even be able to do rewardable good works if we had not been regenerated by grace through faith. As the Apostle Peter makes clear to us, at the moment of salvation we receive “all things that pertain to life and godliness” (2 Pet 1:3). That is to say, God has given us—by grace—all that we need to live a godly life.

But we must utilize this provision diligently. Peter says this quite plainly too:

But also for this very reason, giving all diligence, add to your faith virtue, to virtue knowledge… (2 Pet 1:5).

Thus God graciously supplies the means by which we may serve Him, but the decision to serve, and the diligence employed in doing so, are our contribution. Thus our works involve our efforts and are rewardable.

A totally passive view of the Christian life, in which we make no effort to do right or to please God, has no foundation in the Bible. We are not mere passive vehicles for the Holy Spirit, but active ones who must apply “all diligence.”

As we do, we earn rewards!

Another problem some Christians have with the doctrine of rewards is that this doctrine seems to them to appeal to our “selfishness.” Such Christian brothers may go on to say that we do not need to be motivated this way. Instead, we ought to do all that we do for God out of love and gratitude to Him.

This point of view, however, confronts a serious problem of its own. Not only is a doctrine of rewards taught in Scripture, but we are actually commanded to pursue them. Thus Jesus said:

We may observe here that our Lord does not present the pursuit of heavenly treasure as though it were optional. On the contrary, it is clear that He wants every disciple of His to lay up this celestial wealth.

The reason for this is also stated. Wherever our treasure happens to be, that’s where our hearts will be focused. And God wants our hearts to be focused on heaven and that is why we are commanded to invest in heavenly rewards.

God knows better than we do what will captivate our hearts for Him. Evidently, rewards play a significant role in this.

It may sound pious for someone to say: “I am not interested in rewards! I serve God out of love and gratitude alone!” But such a person is claiming to be more loftily motivated than even the Apostle Paul himself, who wrote:

Do you not know that those who run in a race all run, but one receives the prize? Run in such a way that you may obtain it. And everyone who competes for the prize is temperate in all things. Now they do it to obtain a perishable crown, but we for an imperishable crown. Therefore I run thus: not with uncertainty. Thus I fight: not as one who beats the air. But I discipline my body and bring it into subjection, lest, when I have preached to others, I myself should become disqualified (1 Cor 9:24-27).

Obviously Paul was not “running” to obtain his justification or his eternal salvation! Those things were already his by grace alone. It follows then that Paul is talking about the “reward”—the prize—that could be won by a person who ran a winning race.

Obviously, too, Paul is highly motivated by the thought of winning this prize. He dedicates himself to obtaining it with the same intense self-discipline that characterizes the superior athlete.

Those who disparage rewards as a powerful Christian motivation ought to read their NT again—this time, with their eyes open!

But is this motivation selfish? We believe that no motivation encouraged by the Lord Jesus and His Apostles could ever possibly be termed “selfish”!

What is wrong, in fact, is our own incorrect view of “selfishness.” Scripture does not teach us to be uninterested in our own happiness or well-being. The very desire to escape eternal damnation is a legitimate and urgent self-interest. The instinct to preserve our lives is the same. Nor are pleasure and enjoyment illegitimate experiences.

When God put Adam and Eve in the garden, He furnished them with every tree “that is pleasant to the sight and good for food” (Gen 2:9). They could enjoy themselves freely provided they abstained from eating from the one forbidden tree. Similarly, Paul instructs Timothy to tell rich people that “God… gives us richly all things to enjoy” (1 Tim 6:17, italics added).

But no one who seriously pursues heavenly treasure can afford to be unloving. As Paul pointed out in his great chapter on love, all seemingly spiritual and sacrificial activities are reduced to nothing in the absence of love (1 Cor 13:1-3). Loveless activity will no doubt go up in billows of smoke at the Judgment Seat of Christ as though it were so much wood, hay, or stubble (1 Cor 3:11-15).

No indeed! It is not selfish to obey God by pursuing eternal rewards. Still less can someone who does so afford to be selfish in nature. For if he is, he is forfeiting the very rewards he professes to seek.

No wonder that James censures his Christian readers for showing partiality toward the rich and neglecting the poor. In doing so they violate the “royal law” of Scripture: “You shall love your neighbor as yourself” (Jas 2:8). A couple of verses later, James gives his fellow Christians the bottom line:

So speak and so do as those who will be judged by the law of liberty. For judgment is without mercy to the one who has shown no mercy. Mercy triumphs over judgment (Jas 2:12-13).

The doctrine of the Judgment Seat of Christ and of rewards is not merely not selfish. It is one of the strongest Scriptural motivations for an unselfish, loving, and merciful lifestyle!

But even many Christians who understand grace are confused by the doctrine of rewards because they try to make everything grace and eliminate “merit” of any kind from the Christian experience. But to indulge this kind of confusion is to rob oneself of a potent and spiritually energizing motivation to do God’s will. Let us get ourselves back on track. Let us give to the doctrine of rewards the same high visibility that it has in the NT. Let us sense anew the dynamic power of this truth in the lives of great spiritual men, like Paul himself.

This article originally appeared in the Autumn 1991 issue of The Journal of the Grace Evangelical Society: 3-11.