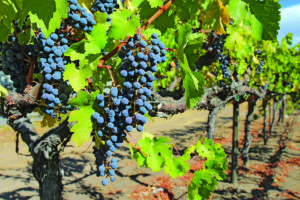 Every branch in Me that does not bear fruit He props up; and every branch that bears fruit He prunes, that it may bear more fruit. You are already clean because of the word which I have spoken to you” (John 15:2-3, author’s own translation, emphasis added).

Perseverance theology distorts John 15 by suggesting that unfruitful believers are actually unbelievers (or believers who have lost everlasting life). So the Father “cuts them off” (a common translation) and sends them to the lake of fire. Incredibly, much of Evangelical Christendom would say Amen to that view of John 15!

Fortunately, many Free Grace people know that v 2a can be translated as “He props up” instead of “He cuts off.” Therefore the verse should be rendered: Every branch in Me which does not produce fruit He props up. But why would anyone prop up an unfruitful branch?

Propping Up Branches in Ancient Viticulture

A document by Pliny the Elder from the first century speaks of vineyardists propping unfruitful branches onto stones to hold them above ground, so they would bear grapes the next year. Depending upon locale, modern vineyardists apply the same techniques, using wires, trellises, or even rocks to lift up pre-productive branches from the ground, so they can produce seed-bearing grapes. As Gary Derickson explains:

When the stems were trained along the ground the grape clusters were propped up to keep them from contacting the soil and being ruined. Trellising of vines seems to have been introduced by the Romans as one of their advancements in viticulture and was used extensively in Palestine. It allowed air to flow through the branches to dry the dew more quickly. Pliny described five approaches to training grapevines “with the branches spreading about on the ground, or with the vine standing up of its own accord, or else with a stay but without a cross-bar, or propped with a single cross-bar, or trellised with four bars in a rectangle.” Thus when Jesus related His analogy, the disciples would probably have been familiar with both trailing and trellising practices.1

But there is something else in the passage that requires our attention.

Jesus Was Speaking to His Disciples

Despite handling 15:2a correctly, many Free Grace people are (as one of my seminary professors asserted) two-handed Christians. That is, they accept a truth on the one hand, but immediately compromise it on the other hand. Getting v 2a right, but v 3 wrong, is like taking two steps forward, and one step back. Let us take a closer look.

Who was Jesus addressing? Understanding the referent of you in v 3 is crucial. You are already clean because of the word I have spoken to you. We tend to universalize verses like this one. No one raises an eyebrow when preachers say: “What Jesus told the disciples is that all Christians are clean because of Christ’s word they heard and believed.” But is that the interpretive point of v 3? Or is it an application from the interpretation? It is crucial to know the difference.

So we should interpret the verse in light of that fact. Jesus said, “You [the eleven] are already clean because of the word I have spoken to you [the eleven].” By implication, the eleven are not the only ones cleansed by Christ’s word. However, interpretively speaking, Christ declared His immediate hearers to be clean, not a wider group.

A Specific Kind of Fruit

Rightly defining the fruit Jesus was talking about is also important. Later in this same context (15:16) Jesus says, “You did not choose Me, but I chose you and appointed you that you should go out and produce much fruit and that your fruit should endure.”

What fruit did He have in mind?

He chose the eleven Apostles so they would spread the message of life after He ascended to the Father. Jesus elsewhere (e.g., in the Parable of the Soils) equates seed with God’s Word. Unlike modern seedless grapes, all grapes of Jesus’ day were seed-bearing. May I be so bold as to assert that unless the eleven were sharing God’s Word with others they bore no seed-bearing fruit?

Dare we also assert that during the fifty-three days between the night before the cross and Pentecost the eleven were fruitless? Acts 1:8 predicts, “But you shall receive power when the Holy Spirit [at Pentecost] has come upon you; and you shall be witnesses to Me…” For fiftythree days, they were fruitless, producing no seed-bearing fruit.

A Message They Needed to Hear

One day, I was explaining a Free Grace view of John 15 to a certain man, and he objected to it. He noted that the passage starts by Jesus calling Himself the True Vine and the Father the Vinedresser. The thrust of his question was: “Why (in describing those who would believe the Apostles’ message) would Jesus give prominence to unproductive believers by mentioning them first?” When asked that way, it does seem puzzling.

However, it is not at all surprising that Jesus would assure the eleven of the Father sustaining them through the next fifty-three days before Pentecost, even though they were producing no seed-bearing fruit. That message of mercy was appropriate, if only because of their fear. It was fear that caused Peter to deny Jesus, and fear that led them to hide behind locked doors after the cross. None of them were prepared for Jesus’ death. None expected the resurrection. None said, Three days from now, He will rise again. Other than John (John 20:8), all seem to have misinterpreted the empty tomb as the work of grave robbers. Yet, Jesus promised them in John 15:2a, “Every branch in Me that does not bear fruit He [the Father] props up.” They would need His support. That was an important promise to the eleven and this same truth extends to us.

An Application for Everyone

What is the practical benefit of getting this right? Most think of this passage as if it were addressed broadly, rather than to the eleven. From such a vantage point Reformed people see it as proving the doctrine of perseverance, i.e., that all true believers will never fall away from the faith. As a result, they scoff at the idea that John 15:2a could speak of propping up, rather than cutting off.

However, I have found that some Reformed people are open to the idea that the eleven were the focal-point of Jesus’ message. They know that Peter’s denials did not lead to the Father cutting him off, but instead to propping him up (e.g., John 21:15-19). They recognize that the eleven were unproductive during the fiftythree days before Pentecost. I have seen Reformed people back away from insisting on this passage being a proof-text for perseverance.

We should all thank God that He propped up the eleven during a time when they did not produce seed-bearing fruit, so they might bear fruit. It is incredible how widely they spread His word in the years following Pentecost. Of course, even though Christians in general are not the focal-point of John 15:2a, we can thank Him for showing us the same mercy as well.