I remember taking a mandatory class for all future teachers in my senior year of college. Midway through the semester, the teacher gave us a group project: we had to create a lesson plan that could be applied to all our subjects. For example, if the history teacher discussed the civil rights movement and segregation, the teacher might assign a book report for To Kill a Mockingbird.

As usual with group projects, one person did the bulk of the work; one guy didn’t even show up, and the rest just complained about how it was done wrong. While we ultimately finished, the project suffered. However, looking back, the idea behind it was excellent. If a student were to have a full day of classes in which she went to math class, then science, then English, and each course was building on the previous one, it undoubtedly would help the student understand the material in a well-rounded way.

Sadly, most teachers never develop lesson plans in light of the other teachers. We typically stay in our lane and ignore each other. I think the same thing is often true in our churches.

In Ephesians 6, Paul tells his readers to put on the armor of God. If we look at the context of Ephesians, we see that he is not telling individual believers to do it alone, but to function as a team. He is talking about the church. In many ways, it is like a group project. In this article, I would like to discuss the first and last pieces of armor the church is told to put on. In doing so, I hope to show that putting these things on is something the church is to do.

THE INDIVIDUALISTIC INTERPRETATION OF THE BELT OF TRUTH

In Eph 6:14, Paul tells the church to gird their waist with the truth, often referred to as the “belt” of truth. A common individualistic interpretation of the belt of truth is that it means each Christian should be honest and trustworthy, especially to those outside the church.

THE INDIVIDUALISTIC INTERPRETATION OF THE SWORD OF THE SPIRIT

In Eph 6:17, Paul lists the last piece of the armor, the “sword of the Spirit, which is the Word of God.” This, too, is often applied to the individual and interpreted to mean each believer should read his Bible, memorize the Scriptures, and be prepared in every situation to speak the Word of God. Commentators often note the sword is the only offensive piece of armor.

As with the belt of truth, many think believers should use this piece of armor against unbelievers. In this view, the Word of God is to be used to attack enemy forces. When we speak the truth to unbelievers, we do so with the Word of God. In other cases, we are told we use the Word of God to rebuke Satan and his demons.

But is that what Paul wants to say about these two pieces of armor?

EPHESIANS IS ABOUT THE CHURCH

Throughout Ephesians, Paul discusses the church, which is the major theme of the book.

For example, in 4:1-6, he discusses how believers are to function together as a body. This is important when we look at what Paul means by “truth.” While talking in 14:15 about the church, he tells them to “speak the truth in love.” Paul is not talking about speaking the truth to those outside the church. In the very next verse, he says that the whole body works together so that the body might grow. This occurs through love and edifies the body (4:16). Hence, in 4:15, speaking the truth in love is to edify and build up the Body of Christ. Paul has stressed that Gentiles are included in the church and have equal rights within the Body of Christ (3:6), which would undoubtedly be part of the truth the church is to proclaim.

Paul makes it clear that he wants believers to speak the truth to one another: “Therefore, putting away lying, ‘Let each one of you speak truth with his neighbor, for we are members of one another’” (emphasis added).

While it is true that believers should be honest with everyone, Paul’s focus here is not on our unbelieving “neighbors” but on members of the church body. This would have been especially difficult at the church of Ephesus, where Jewish and Gentiles were coming together for the first time (Eph 2:14-15).

The discussion of the armor of God begins with a warning. The church is in danger (6:12-13). Satan wants to cause division within the church. He spreads lies within our churches. How do we combat this attack? As the church, we need to speak the truth to one another to maintain unity (4:1-5). It begins at home, with the family of God. 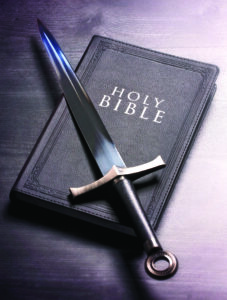 THE WORD IS FOR EDIFICATION

When we address the topic of speaking the truth, the last piece of armor plays a vital role. The Word of God is the source of truth. Chapter 4 also tells us what Paul means by it. When Paul discusses the spiritual gifts, he focuses on the teaching gifts (apostles, prophets, evangelists, pastors, and teachers). These gifts are to be used “for the equipping of the saints and…the edifying of the body of Christ” (Eph 4:11-12). Once again, the emphasis is on the church.

Interestingly, when Paul speaks of the spiritual gifts, he speaks of the danger that the church is in, just as he does when he tells the church to put on the armor of God. The church has been given teachers to speak the Word of God so that it can understand sound doctrine and not be tossed about by the lies of Satan or the men who do his work. The church needs teachers so it will not be
tricked or deceived (4:14).

HOW DID THE CHURCH AT EPHESUS DO?

Paul instructs the church at Ephesus to put on the armor of God. Part of that armor involves speaking the truth to each other in the church, especially as it relates to sound teaching from the Word of God. This is important because Satan is an enemy of the church (cf. Rev 2:10, 12-13, 24; 3:9) and wants to cause disunity and fighting among believers. He brings in false teachers to accomplish these goals.

In Revelation, the church at Ephesus was one of the churches being attacked (Rev 2:1-7). The church was strong on sound doctrine and tested their teachers, and the Lord praised them for doing so. When it came to the sword of the Spirit—the Word of God—they were strong.

We see here the importance of the armor of God. Because the Ephesians had failed in the area of putting doctrinal truth into practice, Jesus says that church was in danger of losing its effectiveness (Rev 2:5). Lack of effectiveness is Satan’s goal when it comes to Christian churches.

If I could apply this principle to the church, we need to remember Satan wants us to fight each other and not him.

Group projects are hard. They require us to submit to one another (Eph 5:21). They force us to put the group over individual pride and desires. Thankfully, the Lord has provided a wealth of tools to accomplish this goal. We have been given His Word and the truth, and He has made us members of His body. As a body, let us use the armor He has given us to glorify Him (Eph 3:21).

Kathryn Wright is the GES Missions coordinator and does far more work than that title suggests.