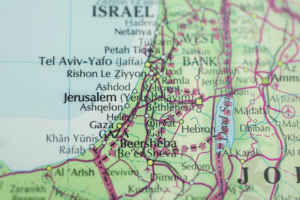 Israel is a fascinating country—past, present and future. We live in such an incredible time in history that makes international travel relatively simple and affordable. Here are my top 5 reasons to visit Israel.

1. Archeological finds. Israel is an ever-expanding treasure trove of history and discoveries. While some artifacts move around to different world museums, only in Israel at the Israel Museum can you see the almost-complete scroll of the Book of Isaiah from the Qumran Caves. Or, better yet, hike up to Cave One where the Dead Sea Scrolls were originally discovered in 1947. Next, bring your flashlight and walk through Hezekiah’s Tunnel in the City of David, which is still under excavation, and continues to reveal ancient treasures. Or walk around the City of Jericho and find your own piece of ancient pottery to take home. Other more recent fascinating finds include a seal ring bearing the name Pontius Pilate, and another seal with the inscription, “Isaiah the Prophet.”

2. Bring the Bible alive. Recently I had the opportunity to see a theatrical presentation of the life of Jesus, with incredible special effects, live animals onstage, and beautiful music. For me, the best part of the show was the vitality and energy expressed among the disciples, in the different towns, and in Jesus’ relationship with people. There was nothing serene or boring about the show—it was bursting with life. I think this is a much closer representation of Jesus than many of our Christian films portray. Similarly, in our minds, we often remove the liveliness of Biblical stories and forget that these were regular people living in real communities, with emotions exactly like ours. That’s why picking up stones in the actual valley where David might have collected his before the battle with Goliath, or standing on an overlook of Mt Gerizim and Mt Ebal, where the Israelites called out the blessings and curses, is so powerful in bringing greater clarity and understanding to the Word of God. Israel offers access to unearthed historical sites and artifacts, as well as reproductions of things like wine-presses, threshing floors, and farming methods used in Bible times.

3. Walk where Jesus walked. For many people, simply occupying the same physical space where God himself walked is life-changing. Visit the city of Bethlehem (and buy a hand-carved nativity set), tour the Pool of Siloam, discovered in 2004, or walk up to the Temple Mount where Jesus walked many times. Stroll along the shores of the Sea of Galilee at sunrise, or take a boat ride through the beautiful waters at sunset. Excavations in Capernaum have revealed a synagogue, perhaps the very place Jesus taught and healed, and a home believed to belong to the Apostle Peter.

4. Natural beauty & intrigue. Aside from Biblical significance, Israel is a unique and beautiful country. It boasts earth’s lowest elevation on land with the Dead Sea at 1,410 feet below sea level. You will never forget the experience of floating in the supposed healing salty waters!

Or, join the thousands every year who make the trek up to the culturally significant Masada to watch the sunrise and reflect on the events that occurred there.

And of course, the capital city, Jerusalem, is a fascinating place with a lively open market, the emotionally moving Wailing Wall, and the Dome of the Rock. Despite everything we read on the news, nothing captures the sense of political and religious division between the Muslims and the Jews than a visit to the Holy City itself.

5. Future events. Israel is a key location in end times events. The Bible says there will be a new temple in Jerusalem, and it also prophesies that the Two Witnesses will preach, be killed and resurrected in Jerusalem. Revelation 16 talks about the final battle of Armageddon, which many believe is the present-day Valley of Megiddo.

Finally, the most significant future event in Israel is Jesus’ physical 1,000-year reign from His Throne in Jerusalem. What an incredible opportunity we have to visit some of these eschatological sites now!

Summer lives outside of Pittsburgh with her husband Nathanael and their five children. She has a Masters in Biblical Studies from Dallas Theological Seminary and enjoys running (but mostly talking) with friends and reading good books to her kids.