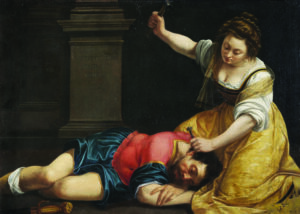 The Bible is filled with fascinating accounts of women such as Deborah, Esther, and Rahab. We study these women for their faith in God despite dangerous or uncertain circumstances. Many of the Bible’s popular female characters make it into Hebrews’ “Hall of Fame,” as they should. But there are many other women whose names we aren’t as familiar with, though their stories of significance or bravery may match those others.

Here are five overlooked women in the Bible whose stories deserve to be noted.

Jael is a rare picture of feminine fierceness. When Israel cries out to the Lord for help after twenty years of oppression from Jabin, king of Canaan, He brings deliverance as Barak defeats the heavily fortified army, slaying every single man. Except one. Sisera, commander of the army, flees on foot to the tent of Jael, where he hopes to find protection. Jael invites him in, covers him with a blanket and offers him milk to drink. She’s mothering him and caring for him, which is why what comes next is such a surprise. “Then Jael, Heber’s wife [if we needed to be reminded], took a tent peg and took a hammer in her hand, and went softly to him and drove the peg into his temple, and it went down into the ground; for he was fast asleep and weary. So he died (v 21).”

Wow. This is quite a woman. She’s the MVP of the battle, capturing and killing the leader of the Canaanite army, without stepping foot onto the actual battlefield. She acts with cunning, efficiency and fearlessness, and she’s in the unique position to help rescue Israel because she’s physically present, caring for her home.

Michal has a bad reputation because she mocked David when he danced passionately before the Lord (2 Sam 6), but early in the story the reader is twice told that Michal loved David.

She was the daughter of Saul, and he used her love for David to try and destroy him.

Saul required as a dowry for Michal the foreskin of a hundred Philistines, which Saul believed David would die trying to secure. But the Lord was with David and his men, and they delivered.

When Saul went into a mad rage and tried to kill David, “Michal let David down through a window. And he went and fled and escaped” (v 12). She then put a large idol in their bed, covered it with goat hair and clothes, and lied to her father’s messengers when they came to seek David, saying he was ill. When they returned to kill him, her father discovered what she’d done.

We rightly remember the friendship David has with Saul’s son Jonathan, but we don’t often remember the loyalty of Jonathan’s sister, who risked her life, too, to preserve his.

After the death of her son, King Ahaziah, wicked Athaliah sought to destroy all the royal heirs so she herself could ascend to power:

But Jehosheba, the daughter of King Joram, sister of Ahaziah, took Joash the son of Ahaziah, and stole him away from among the king’s sons who were being murdered; and they hid him and his nurse in the bedroom, from Athaliah, so that he was not killed. So he was hidden with her in the house of the Lord for six years, while Athaliah reigned over the land (vv 2-3).

Jehosheba showed tremendous courage to hide the rightful heir to the throne for six years until the priest Jehoida revealed his identity and overthrew Athaliah.

It’s easy to get lost in the names here, but Jehosheba was rescuing her little nephew from his power-crazed grandmother.

He grew up to serve the nation of Judah for forty years, restored the temple, and did right in the eyes of the Lord while Jehoida the priest instructed him. Most importantly, he preserved the Davidic line from which our Savior Jesus Christ would be born.

Joanna is mentioned only two times in the Bible, but both reveal a commitment to Jesus at great personal risk.

Our introduction to this woman is in Luke 8, where she is grouped together with other women who support Jesus’ ministry, presumably financially or possibly through providing food or necessities.

Joanna is the wife of Chuza, the manager of Herod’s household. She is married to a man of significant public stature in the Roman government, so her support of Jesus put their livelihood and possibly their lives in danger. She, along with Mary Magdalene, Susanna and others, traveled with Jesus as “He went through every city and village, preaching and bringing the glad tidings of the kingdom of God” (Luke 8:1). This appears to be early on in His ministry, and she’s with Him to the very end.

It is Joanna and other women who arrive at the empty tomb early Easter morning to offer what they believe is their final service to Jesus by wrapping His body with spices. She cared for Jesus—what a beautiful privilege!

We know only one thing about Damaris: she believed the gospel message. When Paul gives his famous speech in Athens about the altar to the unknown god, the Bible records that some mocked him, and some wanted to hear more. “So Paul departed from among them. However, some men joined him and believed, among them Dionysius the Areopagite, a woman named Damaris, and others with them” (v 34). Damaris joined Paul and believed. At the end of my days, even if I’m called to be a warrior like Jael or a rescuer like Jehosheba, what I want the most is to be remembered like Damaris: one who believes in Jesus.

Summer Stevens is married to Nathanael and they have five children. She has a Master’s in Biblical Studies from Dallas Theological Seminary and enjoys running (but mostly talking) with friends and reading good books to her kids.