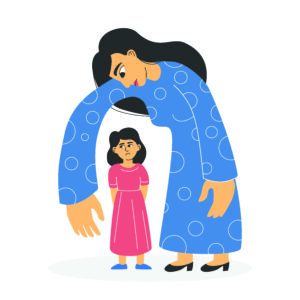 About ten years ago, a dear friend tenderly mentioned to me that she thought my boys, then only toddlers, were allowed to walk all over me. “They’re not very nice to you,” she said simply. It stung a little bit, as parenting corrections always do, especially the ones that are true.

Over the years, I heard similar statements of correction from my mom, predictably on about day seven of a ten-day visit. She’d been there long enough to get a sense of the house and my parenting. Her critiques were always done in love and with concern for me and my kids—things like their bad behavior in grocery stores or how they touched everything or how they weren’t very respectful to me. Many times I felt helpless. My husband helped when he was there, and the kids listened to him, but mostly it was me home with them all day.

Now, I don’t have terrible kids. In fact, I have pretty fantastic kids. But what changed was me. About five years ago, I developed a very strong sense of authority in my parenting or, as my own mother told me, “my mom voice.”

I’ve become convinced that what separates pleasant children that you actually enjoy being around from those you can barely tolerate is the child’s understanding of authority. And of course, that starts with the parent.

I’ve compiled a list of five facts about authority, and why it is absolutely critical for raising godly children.

2. Scripture is our authority. We are used to hearing those words, but read that again through the lens of parenting. One of the most important lessons parents teach is a respect for the authority of Scripture—by that I mean that God’s words can and do affect the way I live, the decisions I make, the way I treat people, the things I value, the things I do, and the things I don’t do. If I like it or if I don’t—God’s word has authority over me. I can choose to submit to that authority or be in rebellion to it. Children will only have respect for the authority of Scripture if they see this modeled by parents. Sunday school teachers are wonderful, but they cannot replace mom and dad. If a child reads “do not lie” in the Bible, and he sees his mother lie, he will naturally conclude that “Mom doesn’t really believe the Bible so I don’t have to either.” The very best way to teach your children to respect God’s Word is to read it out loud to them every day. Talk about it for a couple minutes, ask questions. And then, make every effort, as James says, to not be merely hearers of the Word, but doers.

3. Children must be taught to obey. Did you twinge at that word “obey?” Many parents think it sounds too harsh, too totalitarian. If Scripture is our authority, then the clearest verse for your children is: “Children, obey your parents in the Lord, for this is right” (Eph 6:1). Paul tells us it is right for children to obey their parents. It’s not oppressive or stifling, but right. Kids don’t want to obey; nobody does! We are rebels born with a sin nature. Paul tells Timothy in his first letter that the law is good if you use it right, “knowing this: that the law is not made for a righteous person, but for the lawless and insubordinate…” (1 Tim 1:8-9). For parents, this means that we apply the law with its godly principles as we train our children to be kind, respectful, considerate, truthful, and hard-working. We don’t just suggest these behaviors; we teach our children to obey them as God’s word instructs.

4. Discipline is love. “Whoever spares the rod hates his son, but he who loves him is diligent to discipline him” (Prov 13:24). Solomon doesn’t mince words here. Failing to discipline means you hate your child! I’ve often equated the failure to discipline with laziness (in myself); but I don’t know any parent who lets bad behavior slide that would admit that he or she hates his son. But remember, Proverbs are simple statements—we’re contrasting love with hate. If you love him, you discipline; if you don’t, you hate him. I love how Solomon includes the word diligent—he is diligent to discipline him. Because it’s true—proper discipline takes an enormous amount of diligence because it’s exhausting! It is much easier just to give in and let your daughter stay longer at the park because you want to avoid a fit in public—but what you are doing is costly to the character and development of your child and your future relationship with her.

5. The result is delight. A friend of mine has shared her joy in entering into new relationships with her grown children. “Parenting adult children is such a delight,” she said of her 20-somethings. She and her husband faithfully raised kids with a strong sense of authority in parents, God, and His Word. The children are now confident, down-to-earth, kind, and full of personality. They’re certainly not stifled or oppressed! They have strong marriages, a strong work ethic, and they’re active in the church. Proverbs 29:17 says, “Correct your son, and he will give you rest; Yes, he will give delight to your soul.” Delight can only come after the hard work of teaching your child to respect and obey authority.

Summer Stevens is married to Nathanael (Pastor of Nags Head Church, NC), and they have five children. She has a Master’s in Biblical Studies from Dallas Theological Seminary and enjoys running (but mostly talking) with friends and reading good books to her kids.