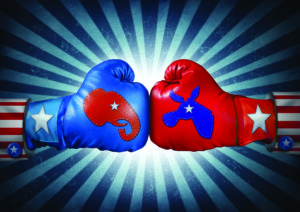 Protestant Theology has long been plagued by one of the same problems as American politics. Ironically, this problem has been around much longer in theology than our current government.

I present three tragic consequences of the two-party system.

When two polarized theological frameworks dominate the landscape, it obscures the possibility that there could be other options. People tend to think in an either/or framework.

When talking with a Calvinist, the conversation goes like this:

“No, I don’t hold to any of the five points of Calvinism.”

“Then you must be an Arminian.”

As well, we often see individuals of a Wesleyan/Arminian background complain on our YouTube channel that we are Calvinists because we believe in eternal security.

Why does it have to be either/or?

Why can’t we choose neither or other?

People often write off a theological concept out of hand because they identify it with the “other” party. What other option could there possibly be?

Often, one’s perception of the other party (and sometimes even their own) is not accurate. This leads to the second consequence.

The sweeping titles of Calvinism and Arminianism can make it difficult to get down to the level of discussing the actual concepts, and more fundamentally, the Word of God. This brings us to an even greater consequence of a two-party system.

Following Men Rather than God

It’s as if the Calvinists and Arminians cry out, “vote for us, or your vote doesn’t count.” There is pressure to identify oneself, to affiliate if you want to be accepted or have ministry opportunities. This obsession with labeling oneself and others as a Calvinist or Arminian often results in greater emphasis on historical and speculative theology than Biblical theology.

I once discussed the need for ongoing Biblical exegesis and research with a self-proclaimed Calvinist. He remarked that Calvin and the Reformers had already done that work. I was aghast! The message was that the Reformers had done the work of going back to the Word of God to formulate their Theology, so we don’t need to.

Calvin and Arminius were both Reformers (in fact, they were both ministers in the Reformed Church!) and the debates are still very much alive. How much more so is the need to be constantly renewed by God’s Word! Let’s scrap the two-party system and move the discussion back to where it needs to be, God’s Word.