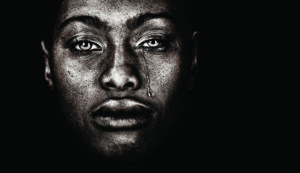 The shortest verse in the English Bible gives solace to us when life turns sad. “Jesus wept,” connecting Him to a number of people whom the Bible recorded as weeping. Can you guess how many? Would the number 60 surprise you? On nearly 80 occasions, 42 different individuals or groups of people in the OT and 18 in the NT shed tears.1

One of the most intense was David and his warriors trying to avoid death by King Saul. David had spared Saul’s life twice because Saul was God’s anointed. Humanly speaking, how did God “repay” him? By taking away everything he had at Ziklag.

So David and his men came to the city, and there it was, burned with fire; and their wives, their sons, and their daughters had been taken captive. Then David and the people who were with him lifted up their voices and wept, until they had no more power to weep” (1 Sam 30:3-4).

Know that feeling? What has sent you to Ziklag? And just when you think things can’t get worse, they do, as David learned when his grief-stricken band of brothers talked of stoning him. Jesus knew Ziklag as well.

According to Heb 5:7, He “offered prayers and appeals with loud cries and tears,” probably in Gethsemane, where He admitted, “My soul is exceedingly sorrowful, even to death” (Matt 26:38a). “His sweat became like great drops of blood falling down to the ground,” even after “an angel came from heaven to strengthen Him” (Luke 22:43-44).

A few days before that, “the whole multitude of disciples” had honored Him during what we call His Triumphal Entry. But He had looked out over Jerusalem and wept because the nation of Israel had rejected Him (Luke 19:37-44).

But why did He weep at Lazarus’ tomb? He knew in a few moments Lazarus would be alive again. Twice in the passage, Jesus was “angry in His spirit and deeply moved” (John 11:33 and 38). We can only conjecture about why Jesus had such an intense emotional response. 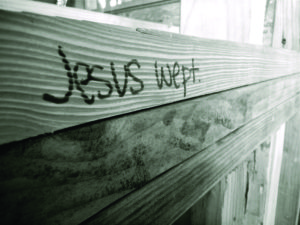 First, John 11:33-35 presents a tender picture of Jesus being grieved by others’ grief. “When Jesus saw her crying and the Jews who had come with her crying,” He was moved to tears. Hebrews 4:14-15 personalizes this for us—we have a Great High Priest who sympathizes with our weaknesses and has been tested in every way we experience, yet without sin. “We don’t stand alone in the midst of helpless rage at life’s injustice. We don’t grieve privately. Jesus shares our grief, weeping with us.”2 Because Jesus understands our humanness, we are never alone or hopeless.

Second, perhaps Jesus wept at Lazarus’ tomb because He “was angry at the tyranny of Satan who had brought sorrow and death to people through sin.”3

My husband says, “Life is a series of struggles, punctuated by periods of peace.”

At graves, we grieve deeply over unfulfilled longings and separation from loved ones. Jesus knew this. The world He created is broken, and the people He loves are in pain. Jesus wept because He loves (John 11:36).

Third, another possibility centers on v 37 where some of the people questioned His credibility. If He could heal strangers, why didn’t He do something for his friend Lazarus? In v 42 He prayed that “the crowd standing here” would believe in Him. How it must sadden Him when people persist in unbelief. Even though Lazarus’ resurrection resulted in many Jews believing (John 12:11), the religious leaders did not. They became more determined to kill Him and (ironically) Lazarus too.

Fourth, could it be that Jesus wept because He knew He would clutch Lazarus from heaven’s glory to dwell on sinful earth a little longer? Jesus alone knew how devastating that could be. C. S. Lewis said, “There are far better things ahead than we leave behind.”

Bob Wilkin summarized it well: “Perhaps Jesus wept because He was touched by the pain of the mourners, or because He grieved the reality of death, or because He was sorry to be bringing Lazarus back to this fallen world. The simplest explanation is the first one: He was upset, so He wept.”4

Richard Rood is a hospital chaplain in Dallas, who cared for his wife Polly for 19 years before she died of Huntington’s Disease. He said:

“In some sense God Himself is moved by our tears. When Hezekiah prayed for his life to be extended, the Lord said, “I have heard your prayer; I have seen your tears” (2 Kgs 20:5). David wrote, “Put my tears in Your bottle. Are they not in Your book?” (Ps 56:8). Maybe we’ve got it backwards. Maybe tears are actually a sign of strength. A sign that we’re not too proud to be seen as “weak” by our peers. A sign that the people we’re weeping over really mean something to us. When Jesus wept at Lazarus’ tomb, those looking on didn’t interpret his tears as a sign of weakness, but of love.6

In this life, weeping is natural but unwelcome. Crying makes us feel embarrassed and inadequate. Our faces grimace, our noses redden and run, and what if we don’t have a tissue? But tears are therapeutic. They express grief in a healthy way, relieving stress, cleansing clogged emotions, and anointing the wounded heart. Spiritually, they help us give up self-sufficiency and become God-dependent. Elisabeth Elliot said, “The will is surrendered through the tear ducts.” Although painful, tears teach lessons we cannot learn any other way.

My first Ziklag involved a cemetery. Surrender seemed like my only option, but I realized it also was my best option. With Jason W. Van DeVenter’s hymn in mind, I wrote:

“I surrender all…” Not because I’m backed against a wall, nor because my options are depleted and my wand’ring will at last defeated.

“I surrender all…” Not due to forceful pressure from above, nor as a rote response to sovereign love. Not seeking some reward for good behavior.

“All to Thee, my blessed Savior…” No other plan has merit—Life’s too hard to bear it apart from Your control. So take me: body, mind, and soul. On You I fall.

Another Ziklag for me involved a hospital bed, cancer, and three surgeries. I struggled until I prayed what Jesus prayed, “Not my will, but Yours be done.” In our Ziklag devastations, we can also follow David’s example. He “strengthened himself in the Lord His God” (1 Sam 30:6). Then he inquired of the Lord, obeyed God, and fought to recover his losses. Tears can increase our intimacy with Christ as we experience “the fellowship of His sufferings” (Phil 3:10). How do you strengthen yourself in the Lord?

Will there be Tears in Heaven?

If that is where the Bema (Judgment Seat of Christ) takes place, then—yes. In speaking about the Parable of the Talents, Zane Hodges stated, “The weeping and gnashing of teeth is an expression of extreme remorse on the part of the servant who now realizes what he has lost by not being diligent in serving his Master.”7 Not until God replaces the old heaven and earth, will He eliminate death, grief, crying, and pain, and wipe away every tear (Rev 21:1-4). See also Isa 25:8; Rev 7:17.

When Ecclesiastes says there is “a time to weep…a time to mourn,” it doesn’t stop there. There is also “a time to laugh…a time to dance.” Psalm 116:8 expresses praise for God who “rescued me from death [eternal security], my eyes from tears [emotional security], and my feet from stumbling” [external security]. The next time you find yourself experiencing the oxymoron of a good cry, remember to identify with Jesus, who not only shed tears but also wipes them away.

1 For a list of Bible people who wept, email the author at kenmarh@comcast.net.

7 Zane C. Hodges, “The Parable of the Talents,” Grace in Focus, May/June 2017, p. 8, excerpted from Chapter 9 of Tough Texts: Did Jesus Teach Salvation by Works?